now we have 3 boats 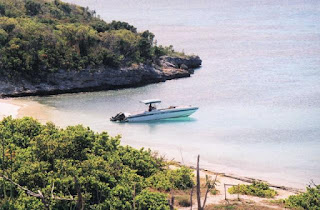 Before anyone thinks that we got another big fancy tour boat let me immediately let you know that this is not the case. Let me explain:
Last august after doing 1300 hours we had some problems with one of the engines on Xtreme. They are super high tech low emission "outboard engines" and we had one of them start giving problems because of bad fuel. I found out very quickly how much parts were gonna cost me and decided that it would be better just to have a spare engine. The biggest cost when you have engines giving problems is the time the boat won’t be working, and we can't afford down time during the busy months. I looked at buying a new spare engine and then at used one but wasn't having much luck with prices. I started to think that it wouldn't be much more expensive to buy a small used boat that had the same model engine. This way I could have a little run about boat for fishing and playing as well as having a working spare engine on the ready. Engines don't like sitting in storage waiting to be used, and i would hate to put take the spare out of storage and find out that while it was sitting it had developed problems of its own. Anyway, I started looking for a boat around 20 feet long that had a single Yamaha F225 outboard engine……I found a few nice ones but the prices I was seeing were way outta my price range. One evening I found a 1985 30 foot wellcraft scarab with 2 of those engines on the back. The engines were new with only 180 hours and the best thing was the price. I knew that the boat couldn’t be as good as the pics showed it to be for the price he was asking, but he described the engines as being like new. It was the engines that I was after anyway, so an older banged up boat wouldn’t be a big deal. I would sell it or fix it up, but the engines were worth the price he was asking. The next week I got on a flight up to Florida to have a look at it, and negotiate a final price if I was going to go ahead and buy it. We went for a ride in the intercostal waterway and she ran well. The hull itself is in rough shape, but not a total wreck like I had envisioned. The outside of the boat is very nice actually with a new paintjob, and with some fiberglass work to the inner structure the boat would be solid. He was selling a trailer as well, which sweetened the whole deal for me. We agreed on a price, I paid him a deposit, and I flew home to find some more money. Anyway, this week we finally have received the boat here on the island and it is sitting down the beach from where I live. Now I have to decide what exactly to do with it. I have had several people come to me wanting to buy it even without the engines which I guess is one option, but all my crew think we should fix it up and use it for fun and possibly some private charters or smaller snorkeling tours. This Saturday I am meeting with someone to try and get a quote for the job of fixing the inner structure, and I think this will help me decide what to do. I know that I could do the job myself which would be significantly cheaper, but fiberglass work is a big hassle. Whatever happens it will be interesting and a bit of fun watching the restoration. I will take some pics of the boat tomorrow. For now I am gonna throw in one of my first wellcraft scarab. That was the first proper boat i got for my tour from Julie Patterson back in the old days of Adventure Antigua. This latest boat is exactly the same design but 4 feet smaller.
Posted by 365 at 7:20 am