do boats ever have problems? 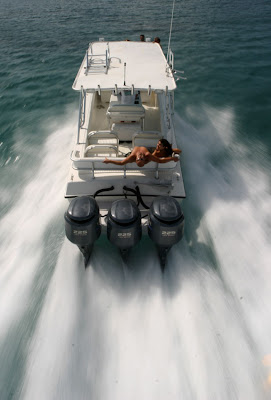 They never stop having problems, and this is something I never get use to. It’s the same with all the boats in this business. One of the other boats in this business had worse problems this past week. Anyway, this past Saturday one of my 18 month old Yamaha engines on Xtreme had a major failure. We had a charter on Sunday and managed to do the whole thing with just two of the three engines. She still cruised at 30 mph easily but wouldn't go much faster. It was fine though because it was only a group of 6. I knew that with a full boat we would be challenged to get near 30, and the two remaining engines would be fighting to keep up. Anyway, I had prepared for this situation by buying the blue boat that you may have seen in recent blog entries which carried two of the same engines. On Tuesday, my mechanic, Tom, took off one of the blue boat's engines and swapped it with Xtreme's bad one. New ones are about 17 grand each in the USA!!!
Anyway, we were back in business today with a full boat. While we were out there though, I had a call from Captain JD saying that one of the Eco boat's drives (propulsion systems) had jammed. I had purchased two new ones 11 months ago too!!!!!!!! They are about 5 grand each landed here in Antigua. I have some old ones which may be able to be used to repair the jammed one tomorrow. Anyway, I cancelled tomorrow's eco tour unfortunately, but I am assured by the engineers in English Harbour that they can use the two old drives to fix the jammed one. They also said that they can do it quickly......We will see, and I will let you know tomorrow.
Someone told me that these things come in threes but that hasn't been my experience. I wish it were, but I am on like number 23 not 3!!!!
Posted by 365 at 6:18 pm