trouble better only come in threes! 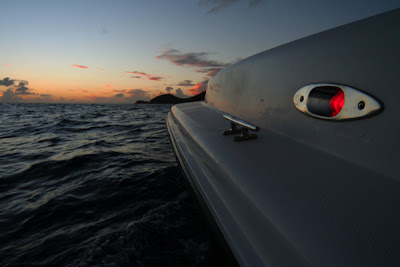 Well as i have already blogged, i had one of Xtreme's engines fail, and one of the Eco's propulsion system fail.....we got those problems fixed in a day each and were "back on the road again". A friend told me after the last problem that bad things come in threes. Jeez did she have to say that?!!!?? They call that "goat mouthing" here. Anyway, sure enough problem #3 came running along at 20+ MPH on Friday afternoon. JD, Junior, and Trevor were doing the Eco Tour and Tony, Francis and I were fixing our Pillars of Hercules mooring.
Tony had been doing some maintenance on Xtreme during the morning and in the afternoon we went off in Xtreme to fix the Pillars mooring which was getting a bit worn. We finished doing that quickly and decided to do a bit of exploring. I will save that for another blog tomorrow or something. Anyway, i get "the phone call" from JD just before sunset. When something is wrong JD has a pretty unique tone and i knew immediately that it wasn't good. He said he had just finished the tour and was coming into Jolly Harbour when he noticed some white smoke coming out of the exhaust. This has happened before and is never a good sign!!!
The last time it was a crack in the "exhaust manifold" which caused coolant to seep into and run through the exhaust system.
Tony went down early on Saturday morning and noticed that the oil dipstick had water beads on it! Great....even worse!
Essentially there was only one option in order to get up and running for the next trip which is scheduled for Monday: get the spare engine set up and replace the leaking one with it. Its easer and faster this way....kinda like what we did recently with the Xtreme's yamaha engine. All day yesterday, Tony spent his time disconnecting the bad engine which is a tough job, and in the afternoon we positioned the boat on the sea wall in the marina in order to have it pulled out. Tom from AMS sent one of his guys with a crane and in the rain, we pulled the bad one out....and put the rebuilt spare engine in. That took about 3 hours and was pretty nasty....we have done this quite a few times now but this was particularly difficult for some reason this time. Anyway, Tony has been down there at the boat all morning hooking this spare up and i am gonna go down to see if we can get it started now. It has about 8K worth of new parts and a new paint job so it looks great, but it hasn't been started in about 8 months so we are a bit nervous. We had maintained it well during the period so fingers crossed!!!!!

This is a pic i took when we were coming back from fixing the mooring. In my opinion its moments like this that make all these problems disappear. Know what i am sayin?
Posted by 365 at 12:41 pm