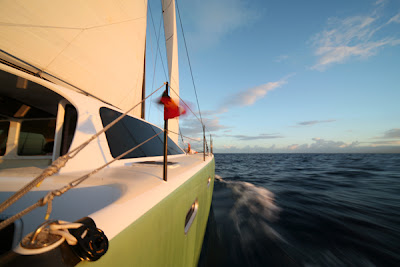 As I said in the last blog a week ago, I was going on a sailing adventure to Barbados with Xabier Ross of Wadadli Cats. He invited Francis who works with me as well as the kitesurfing Star and our friend, Andre Phillip. The purpose of the trip was just pure adventure. We had all been invited to attend the first ever "Beach Culture World Tour" event in Barbados organized by their famous windsurfer and ambassador, Brian Talma . He invited old and new professional watersports people from around the world to come down to Barbados and take part in his unique event. I originally met Brian in Korea where we competed against each other during the 1988 Olympics. Since then we have stayed in touch and met each other at other windsurfing locations around the world. Andre had actually worked for him in Barbados teaching windsurfing just before he took up kitesurfing back in Antigua.
Anyway, Xabier had recently gotten his new 48 foot Gunboat which he had been dreaming about for years and wanted to do some Caribbean cruising. This was a perfect opportunity for him to test it out in a more relaxing environment. The boat is lovely and made from state of the art space age materials specifically for speed, safety and comfort. We set sail after lunch on Thursday with plans to sail through the night upwind of the islands of Guadeloupe, Dominica, Martinique, St. Lucia, and St. Vincent. 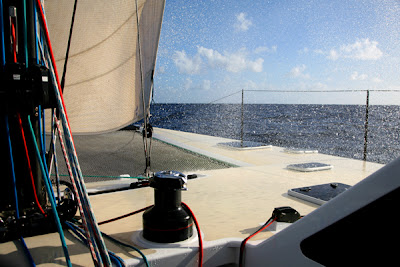 Unfortunately the winds were a little South for us and we couldn't reach down as fast as we wanted to. We ended up having to put in a tack to make it around the windward side of Guadeloupe after sunset. 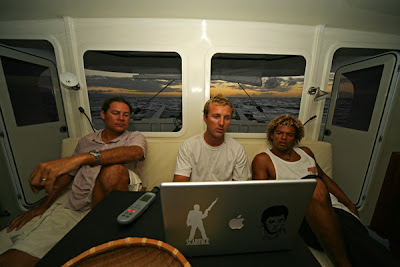 The skies that night were amazing. In fact, during our entire trip, the skies were bright and filled with millions of stars. Its so nice being away from artificial lights at night and when we were 1/2 way between Antigua and Barbados the sky was pure heaven;)
We sailed through the night and most of the next day unable to get the speeds we had hoped for if we had better wind direction. Another thing you see when you are at sea at night is phosphorescence which is a plankton generated light source luminating the sea as you cut through it. The bright green sparkles are soo interesting and refreshing to look at in the dark night.
Speaking of dark night, it is always exceedingly dangerous to be at sea during the night and we all kept ourselves inside the yacht until the morning. IT is generally accepted that if you fall over at night you will not be found. 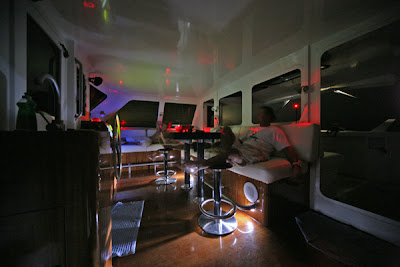 We finally arrived in Barbados at about 7 pm on the Friday just in time for the big weekly party at the famous Harbour Lights. After some interesting customs and immigrations procedures we made it to the party action. After being on a boat for several hours you tend to sway when you get ashore and I am convinced that all the swaying we were doing that night had nothing to do with the cheap bajan rum. haha
Anyway, I will post more about our trip tomorrow.
Posted by 365 at 2:33 pm