As high as a kite in Antigua 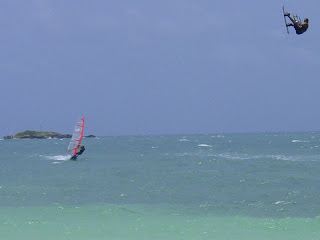 Since I said I would talk about kitesurfing a few blogs ago, I guess I better do it. First of all I should also speak about what kitesurfing actually is. Many people have never seen it and are blown away on our boats when we pull up alongside kiters doing their stuff. Kitesurfing is an extreme sport where a single “sailor” uses a massive kite the size of a small car to pull him/herself along the water surfing usually on a small board of some kind. Most of the boards look like wakeboards or large skateboards. There is usually about 100 feet of very strong 500lb test lines attaching the kite to a control bar, and the operator holds on to the bar for support and control of the kite. The board is steered like a skateboard is steered. Getting massive “air” or jumps is what made kitesurfing look soo cool to many including myself. While working and training for the world cup windsurfing in Maui sometime back in the mid 90s, I saw some of the first kiters trying to kite through the waves and also trying to stay upwind. It really didn’t look that good back then and many of the windsurfers though these guys were crazy. I went back to Maui in 1998 and 1999 and they had come along way. The incredibly high jumps and maneuvers were awesome, and I was very impressed. Also I was surprised at how good one could get in such a short time. The first person to Kitesurf properly in Antigua was Steve Gray who worked as a pilot at Caribbean Helicopters. Steve had what is known as a ram air kite which used air loosely trapped between the upper and lower surfaces of the kite to give it some buoyancy. Not many people were still using that type of kite which had been used originally in the beach kite buggy sport, but Steve made it look pretty good. I wanted to get into it but was still being sponsored to compete in several windsurfing competitions in the Caribbean, and wasn’t sure if I could afford to do kitesurfing as well. Anyway, after my last event I traded some of my windsurfing gear for kite gear with a friend called Marcus. His stuff was pretty advanced and the kites were some of the best you could get. They used internal air “bladders” to keep them rigid and to keep them afloat once they hit the water. There were no lessons to be had and I just figured I could follow some tips from Marcus who was now back in Hong Kong and try it at Jabbawock. Luckily I didn’t get killed but immediately understood that you had to be extremely careful with this new sport. The kites had sooooo much power that you had to give yourself plenty of room downwind. I nearly ended up in the road and decided to take a little boat up into the islands to try again. Anyway, I learned and got better each time I tried it. Before long others wanted to try and I taught quite a few of my friends. I broke my board in half one day after I learned how to jump, and needed to find something to keep me going until I got a new one. I had heard that there was a hard core wakeboard junkie on the south side of the island and just by chance met him at a party one night. Alex Portman wasn’t sold on the kitesurfing “stoke” but was happy to lend me one of his boards. I told him that once he started kitesurfing by himself…wakeboarding would seem like a waste of time and effort. I guess he listened because within a month he had a set of new gear to try out. I took him out for a few small lessons and he was up and away in no time. The thrill of being powerfully pulled along by the wind at high speeds and being able to control this massive kite is pure exhilaration. When you learn how to jump, the thrill is even more addictive. Alex and I decided that we would try to teach as many of our friends as we could and many others wanted to learn as well. The sport is soo cool to see that people from all over the place wanted to get into it. Finally we decided to set up a proper school. 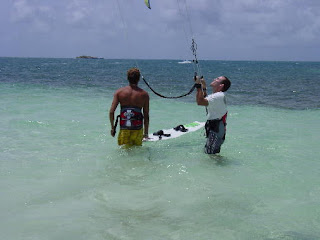 We took one of his old Jet Ski trailers and turned into the first mobile kitesurfing school on Antigua. IT was fun and people were excited. IT was never run properly as a business because both Alex and myself had other things going on, but we taught many people in those early days. We had hired one of our first students to teach as he had done very well during the learning process. Andre Phillip who is now an international kitesurfing brand almost learned in about 15 seconds one day after I briefly told him how it all worked. He was our first teacher, and KiteAntigua started slowly turning over some business.
Over the next few years the school went through some big changes with instructors coming and going, and eventually an additional partner coming in to run it properly. Nik is a very organized yacht surveyor and lover of xtreme sports. He was the perfect partner to have involved and did an excellent job of turning our hobby into a business. Anyway we had some very bad luck with winds one year and the business didn’t do well enough to maintain itself. Nik was worried and eventually we closed it down last year. Today the school is back open thanks to Alex’s persistence and perseverance and the lessons are carrying on without me or nik being involved. We are all happy that its back up and running though, and Adam teaching most days in between doing his graphics business. The funny (not funny at all) thing is that both Adam and I hurt our knees doing kitesurfing. 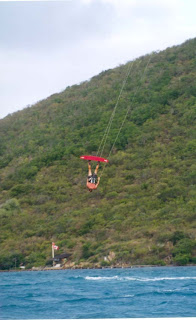 Adam had a pre existing condition that didn’t like the choppy conditions off jabbawock beach and I actually broke my knee in two places after landing badly form a huge jump. Needless to say that neither of us Kitesurf anymore, but we would if we could.
The school is still at jabbawock beach and can be found on this website. If you would like to find out about lessons call Adam directly on 720 kite. Its actually a pretty safe sport if you have instruction and don’t think you are a super hero. I though I was a superhero and forgot that I was actually not even a youngster anymore. Lol Its loads of fun and you should go check them out at the very least as its beautiful to watch.

The first photo is of Alex getting high off jabbawock, and the second is of Adam teaching in the early days of the school. The third is of me doing an old school move in the old days before knee operations.
Posted by 365 at 9:28 am