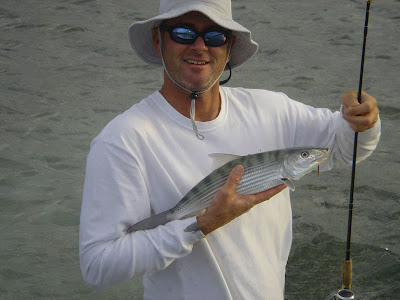 Fishing is a big part of my life and always has been. Although i have two boats and use them for fishing on days off whenever we have nice weather, i don't do fishing charters. I am sure that if you have been following this blog since the start then you will have seen my blog about Tony catching the monster marlin back in may of 2006. We love to fish when the conditions are right and the bite is on. It's not just deep sea fishing either.....I love light tackle inshore fishing which is kinda how i became so interested in the eco side of our islands. You can help but notice all the symbiotic and other relationships out there when you are trying to catch fish. It’s all there for you to see from the little pilchards hiding beneath the mangrove shoots to the pelicans gliding and searching for them above. The show is awesome out there and it’s a joy to be a witness out there seeing how it all comes together as it was created or evolved to do. I could go on an on about all the little relationships you see out there in the mangrove habitats, or on the reefs, or on the flats, or even out in the offshore blue abyss. Although seriously threatened and damaged, it is still a joy to behold.
Anyway, let’s get back on track. When my knee was very bad this time last year, i took quite a bit of time off driving the boats as was recommended by my Dr in London. Of course when you have little or no cartilage in the knee, standing all day while driving a rocking boat is painful. However, i couldn't stand being away from the water, so took up fly fishing with my uncle Jim. 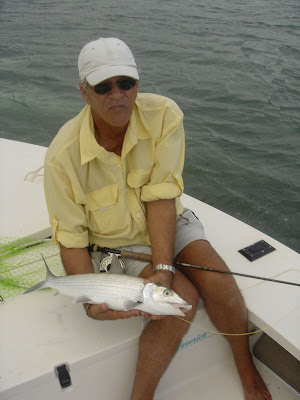 On his boat I can sit as a passenger until we get to the fishing spot and then stand on the sand bank casting for fish. It is way less jarring on the knee and was good fun too. He got me into fly fishing as is a hard core addict for the sport. As a long time hunter of various different game, fly-fishing was the natural progression for him. Hunting animals that live on land or in the air is very similar to proper fly-fishing. You need to be very quiet making no loud noise at all, you need to understand how the target species lives and feeds and travels. You equipment needs to be in tip top condition, and you need to be skilled at using it. When i am out there i almost feel like it must have been the same thing in the old days when hunting lions or other big game. The hunter carefully stalking the prey. The biggest difference is when we do saltwater fly fishing, we take great care to make sure the fish we catch are released safely back into the wild. There are two fish that we go after when we go fly fishing: Permit and Bonefish. These two fish are the most sought after fish in the world for saltwater fly fishermen because of their amazing strength and i guess even more for the incredible challenge it is to catch them. First let me talk about the bonefish. It is sometimes called the "Grey Ghost" because people out there hunting for them sometimes think they see them...and they just seem to vanish into thin air or thin water actually. They get "spooked" with the slightest sound or unusual water movement. They can see you almost always before you can see them mainly because of their mirror like scales which just reflect everything around them. They blend into their surroundings so well that sometimes they will be right close to you and you haven't seen them. All of a sudden when you move, the bones get spooked and with a huge splash they disappear. Only master anglers can catch bonefish on fly rod without messing it up because it’s just that difficult. On average they are about 6 or 7 pounds and can get up to about 14 pounds. The local name for them here is "ten pounder" which would excite many fishermen if they hooked in to that size every time. We use light tackle for them so that the fight is as hard core as possible. They usually graze the flats (grassy shallow sea beds) looking for shrimp and tiny crabs. Since the flats are usually very shallow you sometimes can see their wake or if you are lucky you can spot their tails sticking out of the water as they dig for a hiding prey. In fact, "tailing" is the easiest way of seeing them and it’s what i look for when i am on the flats with my fly rod. Another good indication that the grey ghost is around is when there is a stirred up patch in the flats. If you see a very cloudy spot about the size of a couch in the flats then that is either bone fish or a stingray. They dig for shells or crabs or shrimp in the flats and give their position away. Anyway, once you have found them you very quietly get close enough to cast your fly close to them. You want to make sure the fly (lure) which usually looks like a shrimp or a small pilchard or even a small crab lands very gently close to them. If it hits too hard then the ghost disappears in a flash, but if it’s too far then they don't see it and keep on grazing. If the winds are not too strong and the light fly gently lands in front of the fish then magic can happen. The fish sees the fly and stops searching in the grassy flats bed, and begins to follow the fly which you are slowly retrieving by taking short strips of fly line through the rod. As the bone fish bites the fly you strike it enough to set the hook and hold on for dear life as the explosive mass of power that is the bone fish peels the line off your rod. The run a bone fish makes when first hooked is legendary and you will hear many stories from fishermen about how the big fish got away after a monstrous run. They are known as the strongest fish in the sea pound for pound and will not just give one run and give up like many other fish. Like blue marlin in the deep these guys give many runs and will fight hard all the way to the boat if you are lucky enough not to get cut off. We use a special tool called a booger grip to grab the fish on the lower jaw in order to take the hook out without touching his scales. Like the rays in Stingray City these bonefish have a protective mucus coating that helps them stay healthy. When you release the fish you lose sight of it immediately as it flees in a camouflaged flash.
Last year i caught about 5 of them and spent a hell of a lot of time out on the flats trying to catch more. Fly fishermen can be happy just seeing them.
Now for the second fish and the main purpose of today's blog. My uncle Jim isn't as interested in Bone Fish as he is in Permit. 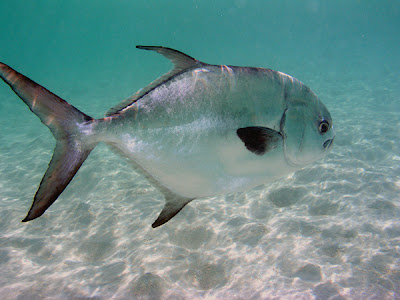 Permit are much larger fish feeding on some of the same stuff that bones do, but specifically like eating crabs. The type of crabs that they go after are not much larger than an inch and seem to live under small rocks and pieces of dead coral on the shallow flats beds. These fish are much larger than bone fish and on average must be about 20 lbs in Antigua. They feed in the same areas though and are as strong as bone fish. They get easily spooked too and you have to be exceptionally quiet and move ever so slowly when they are around. You stalk them like you see a lion stalking a gazelle. One false move and the permit is gone as the gazelle would too. These fish are even more difficult to catch on Fly and i doubt there is a more difficult fish to catch anywhere. I think my obsessed uncle has been hunting and stalking them for about 5 years without ever catching one. There have been many interesting articles on how they feed and why it’s so difficult to catch them on fly. One theory is that they inhale the fly and spit it out in one split second motion once they taste or feel that it’s not a real crab. I have had them follow my fly (fake crab) dozens of times and even had they try to bite it, but have never caught one either. You see them on the shallow flats when their tails or fins stick out when trying to get crabs from under a rock. They also don't particularly like to chase a moving fly which poses a problem. Where we find them, there is usually plenty on the bottom to get snagged on, so if you let your fly fall to the bottom you are in trouble. To avoid this you have to be ever so careful to retrieve the fly slowly enough to make it look like a crab and not too slow that it gets snagged. It’s a mission which is why so few people have caught them. In fact, i don’t think anyone has ever caught one in Antigua on fly until yesterday.
My uncle Jim and a friend of his today finally scored one on fly. The friend had fished all over the world trying to get one and was elated to finally get his glory. The fish wasn't that large but it was a permit and that's what counts. Jim's wife Mossy told me that the two great hunters came home grinning and joking like two teenage kids. Congrats jimbo!
The pics are of Jim holding a bonefish before we had the booger grip and the other is of a permit that was inside stingray city for a while before they let it go. IT was huge!
Posted by 365 at 10:53 am

What a surprise! I've been to Antigua for more than two years and have met just one fly-fisherman so far.

Well I haven't visited Barbuda yet so I didn't know that it has great places to go after bones and permit.

All I was able to catch on fly in Antigua was yellow tail snapper and covalle (not sure about spelling).

I am heading down to Antigua for a few days in April and will be staying on Long Island. Does anyone know if there are any fly-fishing opportunities off the beaches of long island and if not are there any fly-fishing guides in Antigua? Thanks!!!

Do any guides in Antigua do guided fly fishing trips? Possibly headed down in 2012 for my honeymoon.