arrive back in antigua after 570 miles 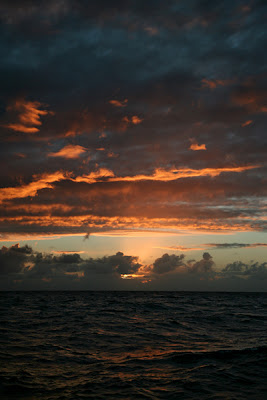 After our exciting night somewhere in the Atlantic east of St. Vincent, the trip back to Antigua was quite uneventful with a good wind speed and direction giving us plenty enough to make the journey pass quickly. During the day I had time to think about the night before and be happy that nothing bad happened. Xabier's brother, Inigo, the co-founder of Wadadli Cats had gone missing from the south-west side of St. Lucia almost 10 years ago doing a similar journey in terms of miles. He had been on a hobie cat island hopping back to Antigua from Grenada. So many people in Antigua still have a hard time accepting the facts surrounding his disappearance, but the ocean can take people so easily. We were lucky the night before for sure or maybe someone was looking out for us.
We had anticipated a sharp wind change during the night, but in the end it wasn't so bad and we were able to make a straight shot back to Antigua going above the island chain. 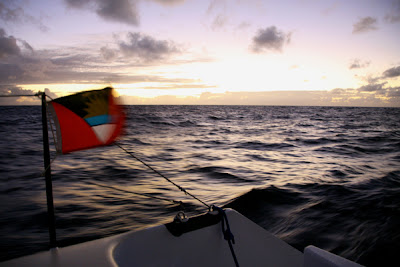 After sunrise east of Dominica we saw several fishing boats chasing small tuna and mahi mahi. They were about 40 miles from land out in the ocean in little open fishing boats as is common with the local French fishermen. I saw one of the boats pull several tuna over the side as we sailed past them doing 12 knots. I looked and looked but never saw any humpback whales which I knew were there. March is the busy month for them I guess. 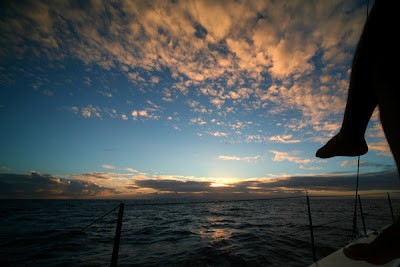 We got back into Antigua just after a beautiful sunset last Tuesday and all felt the pressure of returning to reality immediately. On the first phone call to home, I found out that we had actually turned the eco tour back to port that day after a hose had burst. I had blogged about Tony fixing that last Friday. I am sure that most people know what it’s like arriving back at home after a holiday. Wouldn’t it be nice to return home to all good news and happy stories? Next time it will be like that for sure! Actually next time will be Monday night as I am planning a trip down to St Martin this weekend with some of the crew to see Damian and Stephen Marley perform at the end of the Heineken Regatta. Should be good fun.
Posted by 365 at 8:04 pm