"The Caribbean as a Terrorist hub." Idiotic statement. 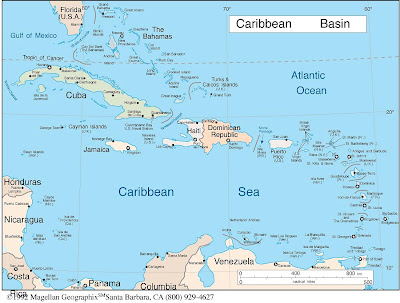 Today I read an article in The Economist online: http://www.economist.com/agenda/displaystory.cfm?story_id=9294568 and have to say that it enraged me. Look how the article begins: "In the wake of the arrests on June 2nd of several Caribbean nationals in an alleged plot to attack John F Kennedy airport in New York, questions are swirling over the threat of terrorist cells sprouting up across the region and its potential use as a base to launch attacks against the US." A friend of mine from Trinidad was surprised that the whole region has now been implicated. Why is fear such a powerful tool used in the media?

This hypothesis seems to be rampant all over the US media as well as with "officials". Thankfully I don't have TV at the moment after this move, but I am sure it’s even worse with Fox and CNN. To show how stupid this kind of statement is I will just go over a few things. What is really considered "The Caribbean"? According to Wiki the "The Caribbean.......is a region of the Americas consisting of the Caribbean Sea, its islands (most of which enclose the sea), and the surrounding coasts. The region is located southeast of Northern America, east of Central America, and to the north and west of South America." Take a look at this map: http://en.wikipedia.org/wiki/Image:CaribbeanIslands.png to get an idea how large and separated it is. Most of the named areas are different countries all together. Guyana, an independent country, is further from Havana, Cuba in the North of the Caribbean than Rome is from Bagdad. As far as Cuba is from Guyana is about as different as the people, politics, language and ethnic makeup. The funny thing is that you don't have to go far in the Caribbean to be dramatically different. Let’s just look at Antigua for example and compare it to our neighbors Guadeloupe. These islands are only 50 miles apart and today as it’s so beautifully clear, we can even see each other. We are as different as you can get though so to be grouped in the media as "the Caribbean" with the implication that terrorist cells are quietly organized ready for attack is asinine and totally irresponsible. The general lack of good geography education in the USA is famous and can only be made worse during situations like this. It is so frustrating to me and other people who rely on tourism to see our little independent island in the cross hairs of the war on terror because of idiotic news headlines. Some people may think that I am taking this too far, but I can tell you that when someone who doesn't know the West Indies well reads the Economist article they may think twice about booking their winter holiday here.

Now the story of these bumbling idiots or would be terrorists is obviously going to get plenty air time for many reasons. Many would say that anything that shows some success in the war on terror will be highlighted and the US authorities did an excellent job of infiltrating and eventually busting this group using other criminals. The fact of the matter though is that this alleged group of would be terrorists appear to have been pretty stupid (thank god) and according to some officials had no chance of doing any harm. According to the New York Times these misfits were more talk than action which we can all thank God for. That being said I find it so strange that there are articles all over the web implying that the Caribbean is a hotbed of terrorist cells. Trinidad and Guyana in the far south of the Caribbean Basin are up to 2000 miles away from the Northern part of the Caribbean and are independent nations. After the end of slavery in 1834, plantation owners sought laborers from India as spoken about on wiki: "As can be seen in the movie "Guiana 1838, after the slaves were freed, the plantation owners were desperate for new sources of labor. In 1839 the British government began a program of recruiting Indian labourers (or coolies) in Calcutta to be sent to Trinidad and British Guiana (now Guyana). They bound themselves to work as indentured labourers for a set number of years on the plantations." This is how the Trinidad and Guyana came to have East Indians making up large parts of their populations bringing along their culture and religions including the Muslim faith. Unfortunately, Muslim extremism however small, does seem to exist in these two countries and there have been several occasions where "terrorist crimes" have been committed. The weirdest thing is that Muslim extremism in Trinidad seems to be limited to a small group of Afro-Trinidadians. The most infamous group is the Jamaat al Muslimeen which as WIKI says is a known terrorist group headed by Yasin Abu Bakr who tried to take over the Trinidadian government in a coup in 1990. This group arrested with the terrorist plot at JFK is allegedly linked with the Jamaat al Muslimeen.

Anyway, all of this has nothing at all to do with the rest of the Caribbean region. In fact, even Tobago which is part of the country called Trinidad and Tobago has no Muslim influence of any sort. It is so unfortunate that Trinidad and Guyana have been slated let alone the rest of the region. This tiny group is insulated and separate from the rest of us in the region. The independent Christian nation of Antigua and Barbuda is 754 miles from Georgetown, Guyana and 446 miles from Port of Spain, Trinidad. Between Antigua and Trinidad and Guyana there are so many other countries, cultures, languages and ocean. I think the generalization as spelled out in the Economist and other media publications is just ridiculous, and I think that the media is just keeping people in the dark while causing many innocent people to be slated and discriminated against. Shame on them!
This photo below was taken on the sister island of Trinidad, Tobago where the tourism must be taking a hit at the moment because of irresponsible journalism.

Hey Eli,
Roddy pointed this article out to me. I like your point and agree with your sentiments, but I don't think your average tourist reads the Economist. Perhaps a reason to be thankful in this case.

louise, i guess that being in the uk you will get different news than people do in the usa. This story about the would be terrorists has been the biggest thing on the news over the past week and still seems to an incredibly important story to many periodicals not limited just to the Economist. Also, i think that the notion that the average tourist doesn't read the economist is somewhat shortsighted. Many people like myself get their news online. For example http://news.google.com/nwshp?tab=wn&ie=UTF-8 is a very popular place to get news and is where i saw that particular article. I would imagine that many people thinking about visiting the caribbean will have read the article or one of a great many similar ones on the web.

totally agree, Eli... particularly about the necessity to become proactive - to undo the damage caused by such ignorant and irresponsible journalism. of course it impacts the tourism product of the entire region... just a few words can destroy a whole economy...as Jamaica found some years ago... more people need to stand up and say their say as you do... well done!

check this new article out:
http://www.caribbeannetnews.com/2004/08/13/knees.htm

Sadly, people tend to link these events with the people or place. Look at Aruba. We'll be coming to your Island Eli, on the Carnival Destiny, instead of Aruba,because of the bad press regarding the murder of Natalee Holloway.We took the same cruise last Dec, and they "unofficially" told us that the bad press Aruba has had, has forced them to make the change. Now, I'm very glad,I didn't care for Aruba that much and was dying to get to yours. But my first thought was - how sad for the people who depend on the tourist trade in Aruba. With complete sympathy for Miss Hollaway's family, is it fair to judge the people and the entire island, based on one incident? We have lost 2 Virginia college girls in recent years, because they trusted the wrong people. We live near DC, and after 9/11, our restaurant industry lost millions because the tourist industry did a nose dive. Bad people - not a sophisticated term, but easily understood - live everywhere, but I'm guessing there are more in my neighborhood than in yours!