Despite only having one direct hit from a hurricane between 1954 and 1995, on the last day of August in that year we all knew things were about to turn sour. The horrific looking Hurricane Luis was traveling very slowly on a track straight for Antigua. 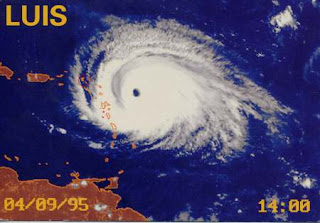 The satellite maps showed the massive storm churning slowly across the Atlantic. All reports indicated that we wouldn't escape, and people across the island and other islands nearby were frantically doing last minute preparations.

Things didn’t look good at all and my dad was extremely worried about his most prized possession…his boat. Of course he had workmen doing work on his house putting in extra nails, screws and hurricane clips but the boat was a major worry. It was being kept alongside a dock in Jolly Harbour outside a property that he shared with Steve Mendes. Steve’s boat was there too. The problem was that Jolly Harbour had never been tested by a hurricane and nobody wanted to see what a category 4 or 5 storm would do. Some feared that nothing at all would be left. After all, the place was on the water and the seawall was only about 2 feet above regular tide level. On the day before the storm was due to hit which I think was September 2nd 1995 my dad and Steve decided to move the boats up into a traditional sort of hiding place for boats during storms. The mangrove inlets scattered around Antigua have been very good historically and they both felt that the boats would be safer tied up close inside a mangrove inlet. The one they chose was in Seatons up near Pineapple hotel. I remember taking the small boat from where I live to meet up with them in Seatons that day. We had loaded a massive anchor which probably weighed about 300 lbs into my boat as an extra for my dad’s boat. Together with the massive chain we were sure that there was no possible way for the boat to drag. Steve secured his boat and then helped us get this massive anchor into the water for Dad’s boat. Once we were all comfortable with how the boats sat in that little mangrove inlet we took off back towards home. There was no doubt that Jolly Harbour wouldn’t be safe during a category five hurricane. The storm came and as we sat locked down on the ground floor of my dad’s house listening to all sorts of crashing and scary noises outside. I secretly started feeling sorry for Dad. No boat could make it through those winds. Officially Hurricane Luis was a Category four hurricane when it hit Antigua, but the measurement was taken after it had passed over. The US Naval Base here at the time recorded a gust of 190 knots 218 mph, so I think we had a cat 5 storm. Anyway, people here knew it was a cat 5. The island was a total mess and although we had Hurricane Hugo hit us in 1989 giving us some idea of what a bad storm would be like, the island took the Louis hit hard. Concrete houses were destroyed all over the place and we saw things that we had never dreamed of. The funny thing is that many wooden houses still stood….testament to good design and construction. My dad’s wooden house was one of them. Apart from the garden which his wife cried over upon seeing it, the house wasn’t harmed at all. Plants and trees were down all around the house and the sight of dead birds made it even more awful. After making sure that all friends and family were ok, it was time to go and check on the boat. Of course the entire island looked different and we were able to see things that we had never seen before. Imagine your home town without a single leaf on any tree….imagine most of the trees being down. Things come into view that were hidden before. The coast looked different. Beaches had disappeared and some had been moved. As we got closer to Seatons Harbour I worried more and more. Coming around the last point Steve’s boat came into View as if it had left the planet the night before the storm and had just returned. It was in perfect shape and even looked better with the water blasting it had taken. Immediately we recognized that my Dad’s boat was missing!!!!
Read part two tomorrow to find out about the old man's boat and what happened in Jolly Harbour. Eli, I love reading the blog. I'm looking forward to Part II. However, I think it's probably just my eyes, but I have trouble focusing on the text for long paragraphs when it is reversed out on the black background. No problem reading short amounts, but I do enjoy reading the whole thing. Am I the only one? P.S. I love the "Boats asleep" photo at the top. With all the action shots we see of them, it's nice to see them "tucked in" at night!

Oh the suspense is killing me! I enjoy reading about the adventures in Antigua everyday and you never cease to amaze me and keep my interests peaked!! I actually remember being on the Extreme and you showing us areas that were still in disrepair from Luis. Looking forward to tomorrow's edition!