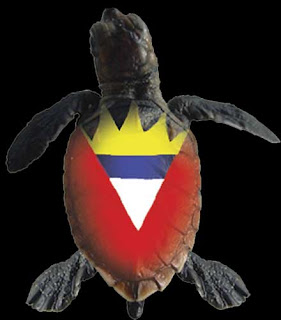 I am very proud and happy to say that Adventure Antigua’s two boats are now part of a very important endangered species study. Mykl Clovis, who has a Masters Degree in Environmental Coastal Planning, is helping the Antiguan Environmental Awareness Group do an island wide turtle study. The Environmental Awareness Group Sea Turtle Conservation project is now just two months old. The goal is to find out what kind of turtles nest here, how many nest here, where the nesting is taking place and to create awareness about these amazing creatures. So far she has 17 dedicated volunteers roaming beaches across the island at all hours trying to collect data. It’s truly amazing, but apart from the extensive scientific data collected over on Pasture Bay on Jumby Bay’s Long Island (which we speak about on the eco tour), there is no info about Antigua’s turtle populations or their nesting habits. As I said in a previous blog entry, these endangered species are extremely important in many ways. This project, co-sponsored by the UK’s Fauna and Flora Flagship Species Fund, aims to help species that have ecological and cultural importance. This is perfect as our turtles have extremely important cultural significance. Like I said in the other blog, they are on our passports and our money and very important to our tourism product as well.
Tony on the Eco Tour and JD on the Xtreme tour are now responsible for checking several beaches along the coast and on the tours each day for turtle crawls and nests. Both boats keep an eye on Pinchin Beach, Hawksbill’s nude beach, and “Shafflers” beach as they both pass close to these. On certain days they collect from other beaches like Yeptons and Deep Bay and will collect data from there if they see crawls. The Eco boat will also collect data from Bird Island’s two beaches and Xtreme will get info on two of Green Island’s beaches as well as from Rendezvous Bay. So far this week, the boys have reported 3 fresh nests which is exciting. Mykl is already getting some fantastic data from her other volunteers which is quickly describing which beaches are critically important for turtle nesting. One such beach is Darkwood Beach on Antigua’s South-west coast. Here Jepson Prince is one of the volunteers. He has been employed at Jumby Bay for years and has always taken a keen interest in their own turtle project taking part in quite a bit of their important study. With his home town being Crab Hill, he has always been interested in the nesting that takes place there and had a wealth of knowledge about nesting in the area even before the project started. He is 100% dedicated to Antiguan sea turtles. Wouldnt it be nice to see Jumby Bay send him off island on some sort of scholarship? He and other volunteers have had many turtles come up to nest over the past month, but unfortunately there has been a poacher taking eggs when they weren’t there. Two weeks ago there was a report of this same poacher actually killing a turtle. The volunteers went looking for the remains of the once majestic creature and were terribly upset to find its undignified resting place in the bush behind the beach. This prehistoric creature only comes up onto the beach once every few years after it reaches maturity will not be returning again. Only female turtles come ashore and they can only nest on beaches. To get to maturity and to this beach, she's had to pass almost insurmountable odds and it’s just so sad that one person has put a stop to it all. Depending on which study you read and where the study was conducted you may see that only 1 in 3000 or as bad as 1 in 10000 eggs reach maturity. She may never have an offspring that is able to nest. Maturity in general is somewhere between 20 and 40 years depending on many different factors. Of course it is totally illegal to kill these endangered animals or even to touch their eggs but unfortunately there are still a few people here doing the damage. There are millions of factors which do harm to the turtles, and in Antigua poachers are not the biggest problem. The worst problem is that our people don’t understand how all the factors come together to wipe out our important indigenous animals and plants. These animals were here before us and unfortunately will be wiped out very quickly unless change is made. Creating awareness of the issues and problems as well as the positive things will help. Studies like this one will end up being a very important tool in the fight to protect the ever disappearing habitat too. After all it is habitat destruction which is more of a problem here in Antigua than poachers. Key nesting beaches are on the move towards development and great care needs to be taken when making the plans. Anyway, for now this is a great push to gain info and to educate our island about the sea turtles that were here long before the ancient amerindians lived here. Keep an eye open for crawls while you are here on the island or on a boat trip. Call the turtle hotline on (+1 268) 773 8448 and leave a message if you see a nesting or someone troubling a nest. As with most things to do with "saving the environment" EACH OF US CAN MAKE A DIFFERENCE.
Posted by 365 at 10:06 am

Thank God for people like you and your fellow volunteers who care about these beautiful animals and their future. I am very proud to know that I was on a boat that will now be assisting with the future of the sea turtles. Good luck!

ohhh cute i love turtles.. i can still remember the turtle i have when i was 12. it got in our house because it was raining back then and its floody. i take care of him for a long time. then i had to set him free. ohh i misss him.

It'll be interesting to read more reports on the study and Mykl's work. We can only hope that turtle protection efforts in Antigua, the US and other countries are successful.

I wish there were more stringent restrictions on coastal development here in the US - you can see where destruction of dunes, and the proliferation of beachside homes and resorts has had a major impact on the ecology of coastal areas.

It was quite useful reading, found some interesting details about this topic. Thanks.