Andy Morrell of Ocean Promotions and the HIHO windsurfing adventure in the British Virgin Islands chartered my eco boat for 9 days. There were several reasons for the long charter. The first being to bring windsurfing equipment from Antigua and St. Martin as there were several competitors in each country that needed to get their equipment to the BVI. You see, the local airlines couldn’t carry the windsurfing gear as it was all too big. We also had to bring down 3 yacht skippers and 4 competitors for the event. Once there we had to follow the event as it took place at various places across the BVI. What usually happens is that there is a windsurfing race from island to island and the yachts which are where everyone is accommodated follow up behind. Anyway, another reason for us to go was that it would be a great holiday for Tony, JD, me and Mykl. Actually JD was hired by the event organizer through me to be one of the yacht skippers as well. We left Antigua at 4:30 am on Saturday with me as skipper and 6 crew bound for St. Martin. Once there we cleared in and out with 4 additional crew bound for Spanish Town, BVI. Before leaving we had to have a great dinner and picked Bamboo Bernie’s for “sushi, sun and sex” as their slogan goes. We had a few hours sleep and then were off again before light hoping to get to Virgin Gorda at about 9 am in time for customs and immigration.
I always love being at sea at night and this was no exception…..everyone quickly fell asleep to try to hide from sea sickness or something. The stars were lovely and with the wind on our back the ride wasn’t too difficult. We made good time and were finished with the notorious BVI customs and immigration before 11 am. Of course we had to fill out enough forms to deplete a small rain forest, but we didn’t care that much. After all we were off to swim at the famous Baths at Virgin Gorda. As usual they were awesome and the snorkeling and rock formations were breathtaking. 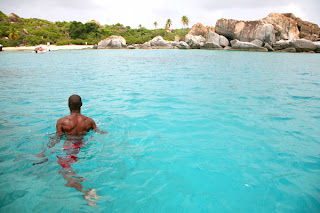 Mykl and Tony who hadn’t been there before were blown away, but the rest of us were equally amazed with the beauty of the natural formations almost thrown on the beach. What a lovely spot to see.
After some lunch we were off cruising up the coast towards the Gorda Sound and The Bitter End Yacht Club where I had a room reserved through my friend Chad Emanuel. All the other people taking part in the HIHO windsurfing adventure were now in Road Town for registration and the opening party. We on the other hand were having an extra night at the beautiful Bitter End. Racing would begin the next morning and after the past few nights at sea, the fantastic 5 star rooms at the bitter end were just what I needed. Without the “hook up” from Chad I wouldn’t have been able to stay there so I was very appreciative of the luxury. JD, Tony, Ricardi and Jean-Marc were asleep by 6 pm on the boat.