the final of the HIHO windsurging regatta The final day of racing at the HIHO windsurfing regatta started with almost no wind. This wasn’t good as I needed to get rid of my DNS (did not start) by finishing a fifth race. With 5 races the organizers discard your worst result and add up the rest. In my class, The One Design (Techno class) I had 3 first place finishes and a 50th for not starting a race. Without a final race I would place somewhere around 15th overall. This wasn’t good at all and I hoped the wind was gonna pick up. One of the people hoping it wouldn’t was my good friend and part of our Adventure Antigua crew from St. Martin, Jean Mark. Without the “throw out” or fifth race he was sitting in first place overall. We went up to Sandy Cay which is a little sandy island in the lee of Tortola to get ready for a race. I didn’t regret sitting out the race and would leave it up to the wind god to decide what would happen that day. IT was so beautiful up there and we rigged up the sails slowly and relaxed peacefully in the shade. I could feel Tony getting upset that this was our last full day in the BVI. It had been a trip of a lifetime for him so far and although JD had been missing Antigua’s two biggest parties of the year The White Fete and the Blue Jeans Fete, he was also enjoying the time in the BVI. I took this pic of them playing in Sir Richard Branson's swimming pool. 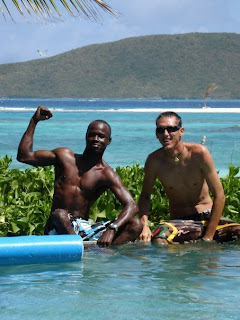 Rusty, the race director wanted desperately to have a 5th race and would even have a sixth if the winds were strong enough. He decided to send us out to try and do a race before lunch. It was very light and not enough to get up moving with any speeds. After the start we limped up to the windward mark…..it was going to be a hot long boring race around Sandy Cay despite how beautiful it all was. Sitting in about 8th place at the windward mark, I wasn’t surprised to see the abandonment flag flying from a chase boat and turned around to head back to the shore. We had lunch before I could eat that last mouthful the winds picked up out of nowhere. I would never have guessed the winds would have come back and Rusty who wasn’t as surprised quickly sent us back out to the start line. It could be a tricky race because after you had gotten around the choppy windward side of the island and raced across towards Sandy Spit, you had to navigate back under the lee side between anchored yachts and find your way to the finish on the opposite side of the island. I had a so so start and immediately had to look at Ricardi and Nat Ford up ahead. I managed to stay close to them until the gusty and fluky leeward side of the island. Nat who was ahead of me went low to try and search for better winds away from the yachts, but I decided to stay as close as possible to the island hoping for some of the coast bending effects of the winds there. I managed to find some lucky gusts and all of a sudden appeared out from underneath the island way ahead. Funny how luck can be some times…...or was it the wind god? One of my Dad’s buddies says to me sometimes “it’s because you are a first born…..luck travels with you”. I dunno about that, but winning that final race meant that I had not only won my division in HIHO but had won the event overall too beating the open division as well. This wasn’t what I had expected to do and not at all what I had set out from Antigua to do. I thought I would be able to do a few races and would treat this trip as more of an adventure with my close friends than as a competitive windsurfing regatta. It ended up being both. Being able to race without major knee pain and still be competitive was a blessing and I felt more than just luck. But walking up to the finish flag I did feel that luck had been on my side as well…..what were the chances? Later that night at the prize giving sitting at a table with the rest of the awesome Antigua/St Martin crew ....... I felt overwhelmed…….. Lucky and blessed! Life is short and sometimes you have to take chances and risks. The knee pain which came a week later and I am feeling now……is and was worth it. I am sure Mr. Justin Cobb may not be happy next time he sees my knee but he’ll understand.

so glad things worked out as they did and you have these wonderful memories to look back on when 'days are dark' .. hope your luck continues to hold - and the knee settles down again! i think anyone reading the blog about hiho must wish they could be there next year. i know i do!!