This blog is sponsored by Caribbean Real Estate. 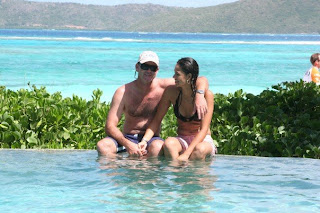 On Race Day 3 there appeared to be some good wind and it was this day that we were scheduled to race across the Anegada Passage ending up on the white sands of Anegada. Reluctantly we checked out of the Bitter End at 7 am and rushed through a quick b’fast before joining up with JD and Tone on the Eco boat for a quick ride down to the starting area. JD had to take the helm on the yacht he was skippering at that point too. Mykl joined him and once they had gotten rid of the last of their windsurfers they nervously set off for Anegada under sail. You see Captain J-Dog has a million hours at sea, but almost all have been under power. Last year he skippered a sailing yacht at HIHO and did very well, but since then hadn’t done much sailing. Anyway, as is usual he did better than he thought he was going to do and the two of them had a nice sail. Mykl took this pic as proof. On the other hand I was nervous as well because I didn’t think this race would be that good for my bad knee. One reach all the way across to Anegada with pressure on that back leg the whole 12 miles without a rest was tough on a good leg. I decided to spend some time before the race tuning my gear so that I would be as comfortable as possible. I played with the boom height, adjusted the universal position on the board and also lengthened the harness lines. I did quite a few dummy runs out on the course to see how I felt and was surprisingly comfortable. The race was about to begin and I was as ready as I was going to be. The winds had picked up a bit and as the red flag went up signaling 6 minutes I was struggling to put more downhaul on my sail so that it would spill some of the air. Since I wasn’t in great shape I didn’t want to be overpowered. Minutes later I glanced at my watch and saw the seconds dropping fast. Five, four, three, two, one, and the horn sounded as the green flag went up. We were off and I had a good start with only a few guys near me. For the next 12 miles Ricardi and I battled towards Anegada. Although the open class “formula” boards were faster than the one design boards on all points of sail except beam reaching which is what we were doing. On a beam reach with good wind I think we were fairly equal unless the person on the formula was a powerhouse of muscle (like Ricardi). You see the formula boards just want to launch out of the water with all the lift that their massive fins produce and I could see that Ricardi was having a hard time with all that power. He was definitely a fraction faster than I was but just couldn’t hold the speed for long enough to get ahead. We exchanged leads a few times coming within a few board lengths of each other several times. It was exciting but as the winds picked up close to Anegada I got about 100 meters ahead of him. As is usual on this race, we were instructed by the race director to look our for a HIHO yacht flying the Highland Spring flag from its mast and the finish flag would be right there on the beach. The brilliant white beach and haze made all of this pretty difficult to see and the yacht was blocking the view of the finish flags. Anyway, with Ricardi close behind me I finally made out the beach flags and two highland spring tents. Usually there are one or two women at the finish flag recording people’s names as they finish. On the beach I didn’t see them and as I got closer I saw two guys trying to put a flag up. One of them pointed at me and I figured that they were not ready for us and I had to finish at their flag. As it happened, the ladies who were usually at the flag decided to sit under one of the tents where they could easily see who finished. I went to the one with that was being manned by two guys and didn’t go to their flag. When I figured out my mistake I watched Ricardi hit the beach 30 meters from me and casually walk to the finish flag. I was about to curse myself out loud when a little voice said “don’t worry eli, you finished 1st yesterday”. It was Josh Morrell, the organizers optimistic young son. I had to smile and agree that since Ricardi and I were not even in the same division I still had just won the Techno One Design class. I sat down in the shade of the tent where Ricardi immediately joined me. We were both very tired and were very appreciative of the Highland Spring waters that the young Mr. Morrell brought us. As we sat there panting and re-hydrating we witnessed the tight finishes of all the other racers. Tony arrived towards the end single handedly running the Adventure Antigua “Arawak Odyssey” across an unfamiliar channel. Tony’s short career as a skipper on our boat has been one filled with a rapid learning curve, and this was the first time that he had done anything quite as challenging. Apart from having his VHF radio on the wrong channel J, he did a fine job. That afternoon we decided to do an island tour together and once we got to the Anegada Reef hotel which was to be the dinner spot later that night, we tried looking for a tour guide. With a total population of 600 it seems as though there were not prepared for the influx of yachts. In the end I rented an old Ford pickup which had two cushioned bench seats in the back. Tony, JD, Ricardi, Jean-Marc, Jean-Michelle, Mykl and I all piled in and off we went. The island’s coastline is beautiful and reminded us of Barbuda and Anguilla which all have similar geographical makeup. That being said, the most exciting thing we saw was the beach bar on the windward coast. This didn’t stop the guys in the back from consuming a large quantity of beer and making almost as much noise. IT was fun. Since this was a holiday, I decided once again to get a room and Chad’s brother Jerry Emmanuel fixed me up with a good rate there. The dinner party that night was a blast. Anegada is famous for their lobster and we were shocked to find out from the fishermen there that all our lobster that night had actually been imported from our sister island Barbuda. It seems as though the BVI are forward thinking enough to have a lobster season in an effort to try to save their diminishing stocks. Anyway, that night the Barbudan lobster however rare they may be back home, were delicious. Tony was the main man during the after party sometimes leading a raucous “Congo line” around the sandy dance floor.
I think he was having more fun than I had ever seen him have. Well almost…..nothing is more fun for him than catching big marlin.
The next day was filled solid with all sorts of things going on. First was prezzie opening for Mykl as it was her birthday. All the racers were taking part in a yacht race back to Prickly Pear Island just below Sir Richard Branson’s Necker Island. As soon as all the windsurfers finished racing over on their yachts, they had to quickly rig their sails and get ready for a race around Necker finishing on Branson’s main beach. We were also going to have the pleasure of being his guests for a long lunch there. This was the part I was looking forward too. I decided to sit out the race as I was feeling some knee pain and would use the extra time to chill with Mykl on her birthday. I was banking on the fact that after 5 races there would be a discard of my worst result which would be the DNS (did not start) that day. Ricardi won the race with Jean Mark finishing second. He had placed 3rd the day before too so our little team was doing very well so far. Necker Island is beautiful and I think well worth the US $47 thousand dollars a day to stay there. The pool is one of the biggest I have ever been in and is designed and constructed to be as natural looking as possible with even the typical beach vegetation around it. We all played way too much in the lovely pool. JD and Tony were in heaven.

The lunch was lovely and Tony, JD and Ricardi managed to meet Sir Richard.

He was actually vacationing there with his whole family. After lunch, 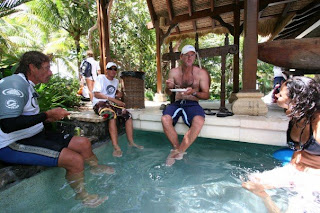 we were given a private tour of the island and managed to see the flamingos and Galapagos turtles too. It did feel a bit strange walking through the main house while the Branson family chilled at their private pool. We met a nice young family member in the kitchen who seemed so friendly and hospitable that I just was shocked. We were being given a tour by Charlie who was racing in the HIHO and worked the rest of the time there at Necker. IT didn’t seem to be something that wasn’t done either which was very odd to me. Just having a tour though the Branson home while they were there relaxing wasn’t something I had ever expected to do (or wanted to do for that matter). These people are cool though and welcomed us. Strange but true. In fact by the time we got back to the beach, Richard and his son were out kitesurfing in front of the eco boat. He was pretty good too. It was time for us to move on to the next anchorage down at Trellis Bay on Beef Island. That night was the famous Pirate Party and everyone was excited. Mykl and I were tired and opted out settling on an exceptional dinner at Eclipse. What a day! Thank Sir Richard!
Posted by 365 at 11:36 am