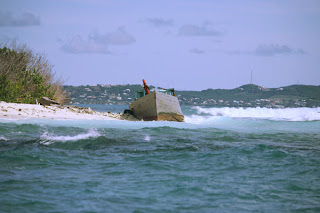 People often ask me about shipwrecks in Antigua and there seems to be so much intrigue surrounding them. Today and maybe on the next blog I will chat a bit about wrecks and what type of ships and boats end up in trouble here only to end up on the bottom and in some cases on top.
Anyway, the reason we were looking for this wreck in the first place is that our new boat being built down in Carriacou needs a lead show attached to its keel. This bit of ballast isn't readily available, and I am trying to recycle some lead from a wreck's keel to use in our new one.
I have spoken many times about my uncle Nick Fuller and good he is at salvaging boats that get into trouble. His company North Coast Salvage has pulled probably over 100 boats off reefs helping to prevent damage to corals as well as prevent these boats from becoming part of the reef. It is dangerous work and it way more technical than the average person and many times the average skipper knows. I have been out on salvages with him at night and the excitement level is almost as high as the danger. It’s scary yet enjoyable if you are able to save the boat you are out there for.
There are many reefs around Antigua and Barbuda that have made it a dangerous place to navigate around since the first European wrecks here back in the early 1500s. Almost as soon as boats started coming across the Atlantic they were wrecked here in Antigua or in Barbuda. Why? Well the entire island of Barbuda is made up of limestone and coral (almost the same thing I guess) and it is very flat indeed. Waters coming in from the Atlantic are extremely deep right up to the massive barrier reef system just off the beaches on the windward side. To this day there are no lights on that side and boats just don’t know its there until it’s too late. Even with today's modern GPS navigation boats are making mistakes. Just last week when I went fishing with my dad, we heard Uncle Nick speaking to a boat that had run aground in Barbuda. Lucky for the crew the winds and waters were as still as it gets and it was pretty easy for them to get off safely. Antigua's North coast is very similar to Barbuda with a low limestone coastline and barrier reefs just off shore. From our house on the North Shore I watched many boats run into trouble as a kid. So many skippers get it wrong. It’s not just the inexperienced ones either and several excursion boats that I know of have ended up in trouble over the years. The south side of Antigua is made up of ancient volcanic rocks and although there is a huge barrier reef called Cades, the waters are generally safer for navigation. Cades is where Ross and I went looking for this wreck using Xtreme yesterday. It's a long reef stretching from just outside Curtain Bluff in an east west direction towards Johnson's Point. For thousands of years the beautiful Cades Reef stretched submerged just inside the 100 fathom curve and outside the shallows along the coast providing food and protection for humans and a huge variety of wild life. In fact some of the best and most sophisticated of all Arawak Indian settlements were close to Cades reef. Much has changed since Arawak Indians fished on Cades reef some 2000 years ago including their ultimate genocide. The Siboney hunted there 2000 years before them too only using shell and stone tools. Nobody knew what happened to them but 4000 years later I doubt anyone would be able to catch enough to survive there with stone and shell tools. I know I am getting off topic, so let me get back to the wrecks. Many say that the hurricanes we get these days are stronger and more frequent than ever before. We don’t get many hurricanes here in general with no direct hits between the early 1950s and 1989 when we were hit by Hurricane Hugo. It was the first storm in my lifetime to hit Antigua and was a strange one for the south coast. Cades reef which lay submerged since the first coral polyps colonized the area hundreds of thousands of years ago became an island in one night back in 1995. For some reason I always thought it was the stronger hurricane Louis that raised the broken reef out of the water and had arguments with Trevor about this. Anyway, I just spoke with Captain Franco of Franco's Glass Bottom Cruises and Rob Sherman, GM of Curtain Bluff Hotel, who both agreed with Trevor. Hurricane Hugo back in 1989 developed massive waves coming in from the South which trashed the entire coast and Cades Reef. Many beaches still are missing sand to this day from that storm and so much coral was broken during that storm that by morning an island had been made along the entire span of the reef. As seen in this pic taken from an interesting page on The National Center for Coral Reef Research the huge corals were just ripped apart and thrown where the waves wanted to have them. 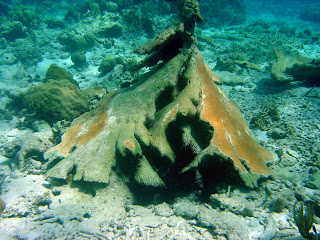 This reef had been fooling captains and crew for hundreds of years and now all of a sudden even in bad visibility you could see it poking as much as 8 feet out of the water. I took this photo back in Sailing Week 2006 and it shows what i am speaking about. My uncle Nick wasn't happy and his business suffered as a result. he he he The poor reef has never been the same and to make matters worse we were hit by another even stronger hurricane in 1995 and again in 1998. Far fewer boats ran aground with the reef out of the water but at night some mariners still managed to make the mistake. Several yachts last year ended up in trouble on Cades including the one Ross and I was looking for. The yacht was about 35-40 feet long and like many wrecks, was rumored to be on a smuggling mission. This time the cargo was alleged to be illegal immigrants. Somehow, the yacht sailed right up onto the dry coral in the middle of the reef and was left there where it sat for months and months being slowly picked apart by the sea and those who looked for tiny treasures. A friend got a nice compass from it. We on the other hand were looking for its keel, but knew it would be very hard to find because of what happened this hurricane season. Although we have not had any hurricanes hitting our shores directly since 1999 we did have massive waves pounding the south shore in summer 07 when Hurricane Dean passed 170 miles to the South. The waves were so big in fact, that the strip of land (broken coral) almost all got washed back into the sea and the yacht in question vanished. This photo taken by "bugdriver" shows the reef after the storm and as you can see its gone back to being submerged. 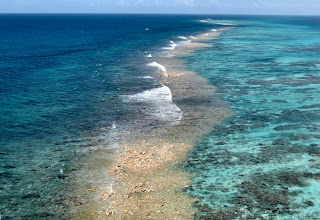 Uncle Nick is happy again I imagine. ha
Ross and I arrived at the place where I imagined the wreck rested before the storm. I made a call to Andre, skipper of Wadadli cats who snorkeled close to it many times, and he said we were exactly in the right place. He was passing a mile to our port side and could see us. We entered the water as a short rain squall with rainbow passed above us and were not surprised by how much warmer the water was. Around us colourful fish scattered as if disturbed by our big splash. The waters were clear as is usual on the south side at this time of year with visibility over the coral blow us spanning about 70 feet. We swam over the reef passing 3 barracuda, many other fish and countless black spiny sea urchins which seem to be making a big comeback at the moment. There was a section of the dry coral still above water and it was there that the wreck was sitting before Dean passed this summer. As soon as we got to the spot we started finding small bits and pieces of the boat. A section of aluminum mast, the bimini top's frame, a coral encrusted mask, a small hatch, bits of the sail, some stainless steel bits and pieces, but nothing significant. We looked and looked seeing nothing bigger. We even got out of the water onto the little "island" for a better look and tried to imagine how the wreck would have been pushed by the massive waves. As you can see from this pic showing almost exactly where we were in the distance yesterday, the waves During Dean's passing were of titanic proportions. 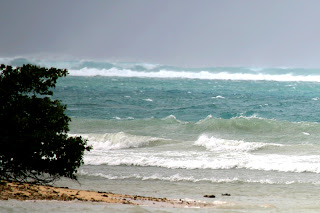 Just when we were about to give up and go back in, I saw a tiny piece of sail sticking out of the broken coral. Imagine thousands of rocks which were live coral at one time, tightly piled upon each other only inches below the surface. In all of that, the piece of sail poked out. I turned over a few of the broken pieces of coral as tiny, thin, black starfish scurried out of the way, and it became evident that we had found the yacht. The sail was attached at the boom/mast joint and the rest of it was burried right there i guessed. We had found it! That was the good news I suppose, but the bad news was that it lay almost entirely covered in broken coral. There was no way that we were going to get that keel. For now until the next massive storm the wreck and its keel will stay inside Cades reef.
Wow, look how long this blog ended up being. My next few blogs will add more info on Antigua and Barbuda’s ship wrecks and why we don't have more of them to snorkel and dive on. I will also explain why we don't have much chance of finding treasure in any of the hundreds of wrecks that we have scattered around the place. Hope you enjoyed the long read. eli
Posted by 365 at 9:55 am

Hi there, my wife and I visited Antigua for the 2nd time in Dec. 2007. We took your tour (the Eco Tour) and had an especially great time!

We also took a day trip to Barbuda. The waves were a bit much on the ferry ride that day (Dec. 7th), but it was gorgeous. We wished we could have stayed a couple days.

We love checking your blog, as it reminds us of the beauty and tranquility that we found on our vacation, a nice way to daydream for a few minutes as a break from our busy lives in the U.S.

Thanks for the great posts!

Eli, I enjoy your blogs. They are entertaining and educational. I miss living on that island. Someday but for now my quarterly trips will have to suffice.

My GF and I will be staying at North Beach Cottages this august for our honeymoon.

Where are those WAVES!! Are those Barbuda or Antigua? Can I buy a board down there.

I used to surf alot in South Carolina and those waves look sick!

Anyway to get from Antigua to Montserrat via Sailboat/Charter