Each winter several big cold fronts push off the East coast of the USA and Canada and give the Caribbean a slight change in weather for a few days. If the cold front makes it all the way down here then we will get some cloudy weather and usually a big surge in winds. Our normal trade winds and waves come out of the East coming over from the African West coast, but during big cold fronts we get winds and swell (waves) coming out of the North. If cold fronts have all the right (or wrong depending on how you feel about weather) conditions, then a gale or nor-easter will form off the North-East coast of the USA. These storms can be as strong as hurricanes and although they can be over fifteen hundred miles away as in the case of the storm today, we can have huge effects from them. 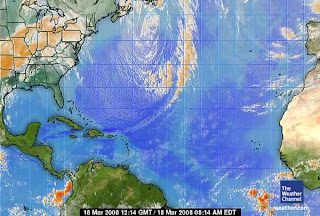 This storm as seen in the satellite photo taken a short while ago has winds of over 60 mph in the middle making it almost hurricane strength. 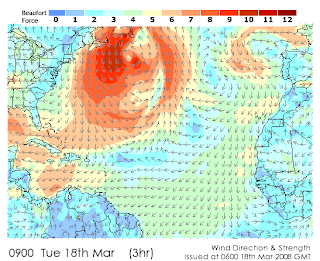 AS you can see from the swell maps, the usual east to west flowing Atlantic waves are being replaced by massive North to South long period swells which will stick around for a few days up until Easter Sunday. This photo below shows waves right now in the North Atlantic around the storm up to 30 feet!!!!! 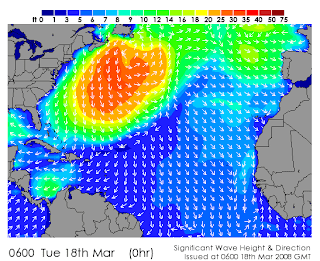 All the surfers here have been going bananas since windguru.com first indicated that we were gonna get some. For whatever reason everything is lining up for the swell to be big. 4.9 meters means waves will be over 15 feet in open waters later this week. This photo shows what it will be like on thursday in the Atlantic. 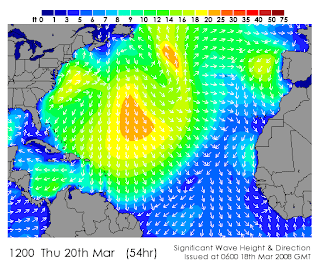 North and West facing coastline that is not protected by barrier reef will get huge waves and there will probably be some beach erosion over the next few days too. I for one will be surfing most of the time and i think we will have to cancel trips. I just got a call from Wadadli Cats too who is thinking about cancelling tours tomorrow and on thursday. We will have to see. Tomorrow we will both be up checking conditions before the sun risies. Friday's forecast shows the waves getting smaller. 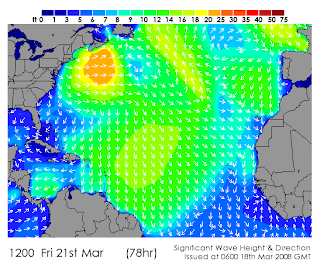 The strange thing about these "ground swells" as they are called is that they are mosly only dangerous when they get near shallow spots not protected by reef and dont have anything to do with winds here on the island. Out in the open they are like long swells and don't cap. I remember fishing one time when the waves were about 15 feet, but there was no wind. It was like being in a rolling and moving hillside. The fish didn't seem to mind which was cool and the surfers love it. Anyway, SUP or "stand up paddle" is the sport of choice for me and a few of my friends when its like this these days, and i will try to get some more pics of our sessions over the next few days. The last time we had good waves was back in Jan and there was no wind on them making them perfect for surfing. Nik seen in the opening shot was loving life back then. Tomorrow there should be winds of about 16 knots, so it will be a little more bumpy on the board. Last week we had a nice little SUP sunset session and i took along my camera. The MPEG movies are cute and show a nice sunset on the SUP. The area we paddled is Jolly Harbour to Jolly Beach. AS you can see, SUP isn't just about waves.
Posted by 365 at 10:12 am