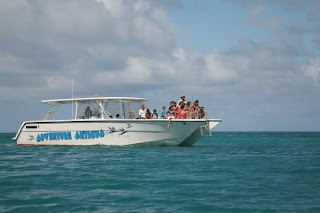 This past weekend it was another Adventure Antigua party and this time Justin was the main man who was boss. Justin told me he was 7, his cake said 9 but i think he was acutally 29. He is a very mature charismatic 9 year old and told his parents that he wanted to go out on our boat again, but this time he wanted it to be different to his sister's party. 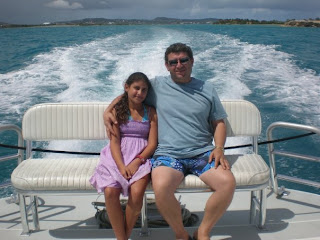 The lovely Rax seen with her Dad above had a real adventure several weeks before and this birthday party was equally enjoyable for all guests and crew alike. Big Justin invited a bunch of his friends from school as well as some "older" family and friends for a long cruise up the coast from Jolly Harbour all the way up to Green Island. 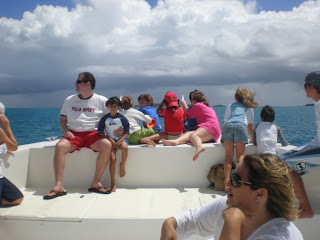 First we had to stop at Stingray City park to visit the rays as well as Greedy Bob the hawksbill turtle who hangs out nearby. 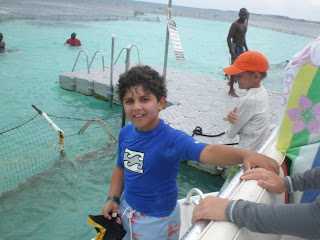 Some of us were lucky enough to see him on this day too. The rays were swimming by and Justin seen in the pic above and below was the first to say hi. 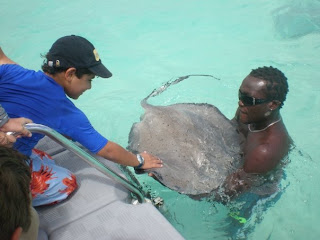 After everyone had drinks and had seen the rays we were off to Green Island. Tony, JD, Ross and Olly took the Arawak Odyssey up past Devils Bridge and into Green Island's Non Such Sound while i followed in the boston whaler. We had JD's whaler so that we could pull the Jumbo Dog once again which was a favorite in the last party. The kids then felt that they didn't get enough and if you remember i took some heat from one of the young ladies who thought i was a bit "evil". hehehe
We set up two lunches. One for the kids and one for the grown ups. 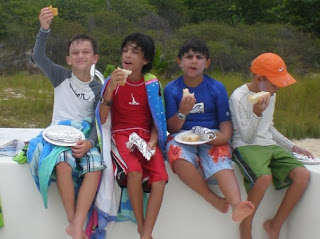 My crew decided that peanut butter and jelly sandwiches, hot dogs, tuna, patties and cheese sandwiches were better than the adult food. 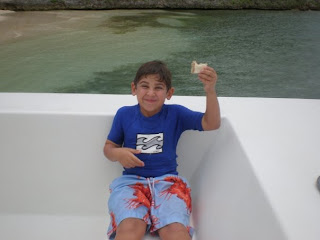 I guess this happens when you eat the same thing every day. That being said the adults loved our regular buffet. 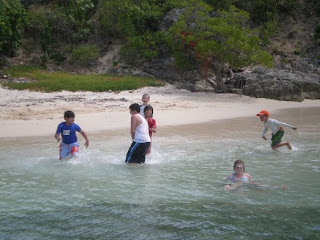 After playing on the beach for a while picking on the biggest kid there (Elias) and making enough noise to wake the dead it was time for the Jumbo Dog. Who comes up with these names?
Anyway, Justin, being the main man, invited 4 of his best pals to come on with him on the first ride, and once they had belts on, Captain JD took off. 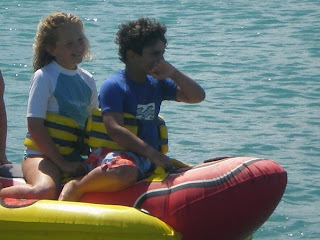 We could hear the screams for the whole ride even though JD kept the speed limit to a very low pace the thrill was still big enough. 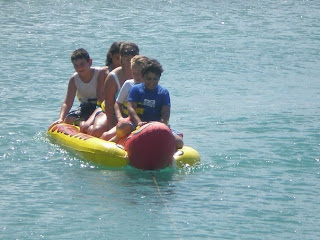 Each child had several turns and then all of a sudden i heard screams from all directions. It was Justin's last ride with his friends and they managed to flip the dog over. 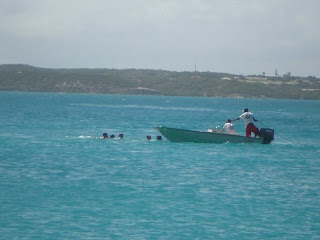 I counted 5 little heads swimming quickly towards JD and Tony who were already back alongside them. When they got back to the boat they were talking all at once recounting the adventure from all different angles of bravery. 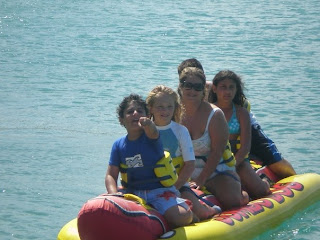 IT was now time for a bonfire! Ross and Olly had been in the forrest looking for dead wood and within minutes of the last Jumbo Dog rider coming back to shore the first marshmellows were getting roasted. 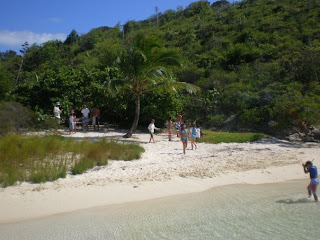 In fact we had to let the little fire cool down a bit before the kids were allowed to get close enough, but they were amazingly patient. One and a half bags of sticky gooey marshmallows later and we had some hyper kids on our hands. 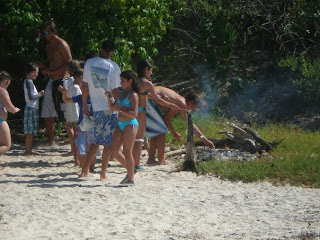 They also had marshmallows on their hands and on their faces. Cameron Hadeed was covered in the stuff, but i think that's because this tiny skinny little kid had managed to consume about 10 marshmallows. He's too cute! I think he would have kept on going too but we told him we had to out the fire. Olly took careful care of that before coming back to the boat just in time for the cake. ....and what a cake it was! 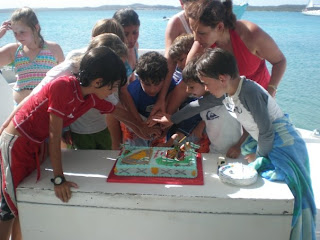 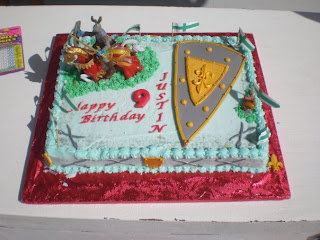 With all the sugar in the systems of those kids it was time for me and JD to abandon ship with the Boston Whaler. Tony, Olly and Ross managed to take Justin, his family and friends all the way back to Jolly Harbour. The day had been a 50 mile round trip of fun in the sun, and i hope enjoys many more such birthdays to come. The crew and i enjoyed the day out too. 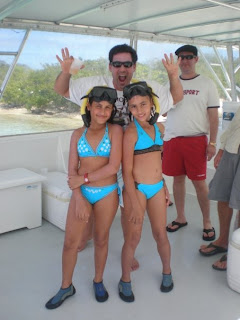 I went to elementary and high school with some of the adults on the trip and it was good to hang with them again. Thanks to Laila for asking Adventure Antigua to be involved once again and thanks to her also for all of these great photos. Well done! OK now since i know there are some smart kids reading this. Please make notes and comment on all my spelling mistakes so that i can correct them. My spell checker doesn't work after 11pm. hehehehe
Posted by 365 at 7:29 pm

Dear Uncle Eli This was the best birthday I have ever gotten in my whole life.Thank you so mutch and I cant wait to go on your boat again.