Early in the morning on a cloudy Saturday in April Stevie Mendes, Olly Cobb and I packed our bags and set out to provision for the first proper sail all the way non stop to Antigua. First stop after we paid our bills at the hotel was the ATM machine. I stuck my card in and a little message came up and said i should contact my bank! Just like that my cash source was gone. It was a Saturday so nobody was in the little Carriacou bank. I was quite happy to find that one of the supermarkets took credit cards, but after paying for hotel rooms, buying all the rigging stuff, as well as a bunch of stuff from the chandlery in Grenada i was worried about how much food the little Visa card would manage to buy. Anyway, we managed to buy all that we needed and made our way to Windward. I had to find out if Alwyn's sons Chris and Terry were coming and leave Stevie and Olly to load up the boat while i went and cleared the unregistered boat out of the island with customs and immigration. Anyway, four hours later Chris, Terry, Olly, Stevie and I hoisted the sails for the second time and set off legally on a sail that would end up taking 50 hours non stop. The clouds were setting in and the winds were very strong. The picture didn't look anything like what i remember windward looked like the day before the launch seen here. It was rough windy and grey as you can see in this shot taken by Olly shortly after we left. We were still inside the barrier reef but you can see that it wasn't looking like nice sailing weather. 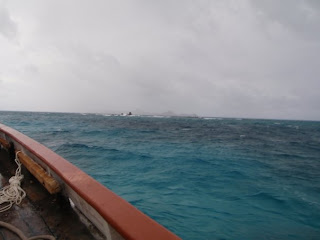 It was 4 pm by the time we said goodbye with loud horn blasts to Windward. One little boat followed us out the reef wishing us good luck. I didn't like the look of the weather and wasn't looking foreword to testing the boat to its limits on the first proper sail. We sailed out past Union island all the little islands of the Tobago Cays and into the deep passage on the way towards St. Vincent as the sun set seen here in another Olly pic. 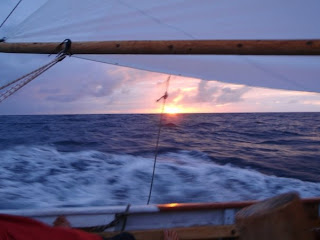 eli all we want to do now is come on one of your trips on ocean nomad. we thought that your eco tour was wonderful but this is going to be something else. justin and i look forward to booking as some of your first clients. we know it will be hard to get a slot - so will you let us know when you are starting to take bookings. iona