Wow, my last blog about whales was supposed to be followed by a blog a few days later telling everyone about the 42nd annual Sport Fishing Tournament. I was going to talk about our practice runs where we managed to catch a few fish and spot loads of whale pods. Little did I know that moving apartments (which I was doing at that time) would leave me without any internet for 3 weeks!!!!!
Anyway, I am back online now and realize that I do need to join internet addiction anonymous. Our two practice runs out fishing this year were not that great. In fact on the first one we hardly got a single strike, but managed to see five different pods of whales off the South coast off Antigua. We saw whales breaching and slapping and generally enjoying the warm waters here. They were all very late this year and on the day where we saw all these pods, they were all moving fairly quickly up around the South Eastern side of Antigua as if trying to go around the top and swim North. We have only seen one pod since then and I think that they have all gone now. We won't see them again until next Feb maybe. 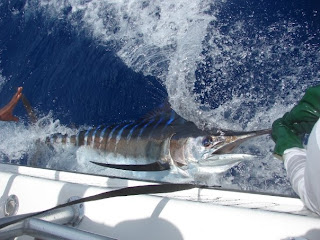 On our second fishing practice trip we managed to release one blue marlin about two hundred pounds and had a very big one burst off after taking about 4oo yards of line off the big 80lb reel in seconds. The reel was incredibly hot when the line broke. Luckily for the marlin and for us, the line broke pretty close to the fish. I know people always talk about the big one that got away, but that's because nobody cares about the little ones that got away. 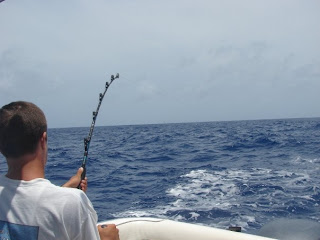 We had four very experienced fishermen on board that day and we all agree that the fish was bigger than anything we had released or landed before. 650 - 700 lbs was what they thought. The tournament was a week away and we couldn't have lines breaking then.
Posted by 365 at 5:08 pm

thanks to Big John Watt (and kiesha) for the cool fishing photos as usual.