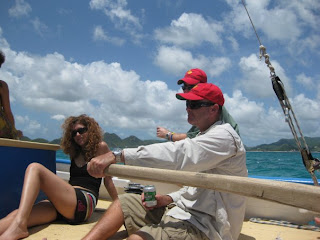 It was my girl friend's birthday recently and we decided to take some friends and family out for a cruise on the recently re-launched Ocean Nomad. The engine is in but not all hooked up with fuel tank, exhaust and bits and pieces, to JD had to ferry everyone out to the yacht using Xtreme. 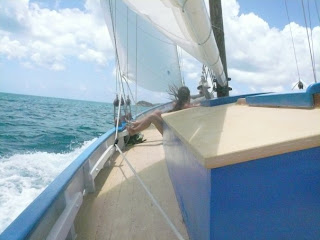 Anyway, there must have been about 14 of us on the yacht and she sailed very well along the coast out from Jolly Harbour towards Deep Bay. 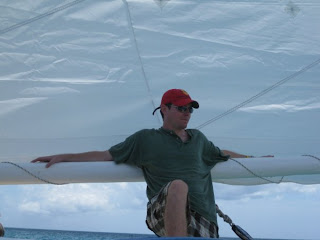 With no engine and not a single person apart from me who had sailed on her before we had to be careful. There were a few sailors on board so it was actually pretty easy. We dropped the hook very close to the Andes shipwreck so that we could all jump in and swim. JD had brought his thundercat along with the Xscream ring thing that we used at the kid's parties. 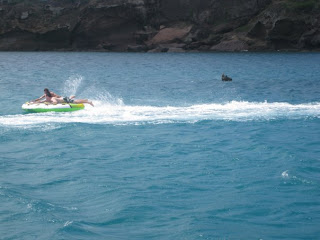 A few of the big kids enjoyed going for rides while the rest of us ate and drank.
Time kinda flew and before long it was time to sail back to Jolly Harbour. 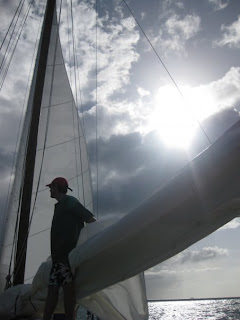 There were a few squalls and with Galley Bay's point just below us we just used the jib to clear it before we hoisted the big mainsail. 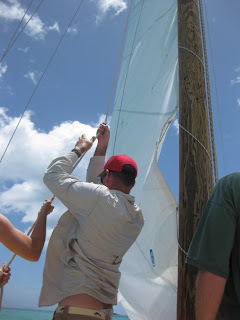 In Five Islands Harbour the winds kicked up pretty good and Ocean Nomad glided on with grace and speed. 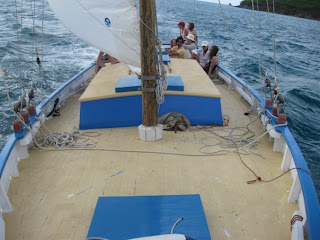 So much work has gone into this yacht and continues to this day. In fact, this past weekend the greenheart floorboards were put in over the top of the interior lead ballast and the engine box was finished. I think by the end of the week we will be able to get in and out of port under engine power. I dunno how my uncle sailed for all those years without an engine. Charters under the Sailing Antigua company name will probably not be started until later in the summer. To get it perfect it is taking plenty longer than i thought. Sail covers and the awning are being made at the moment by Graham at Antigua Sails, and a head will be constructed shortly. We still have not gotten a ladder either. There is an amazing amount of work that has to be done in order to ''finish'' a wooden boat to the point where she is ready for day tours and charters. The journey from the photos taken above back in Carriacou in Feb. where and when i took this boat over has been a rewarding challenge. Its still not finished! 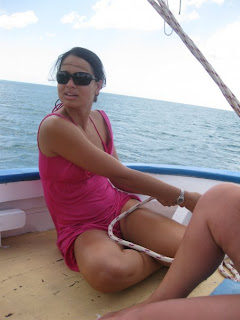 This sailing trip for my GF's birthday was the first time we went for a cruise with regular people and that in itself was a learning experience, and i was glad that it all worked out well. She even helped trim the mainsail as seen above. Nobody could ask for better crew! 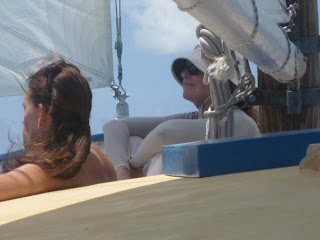 My mom and sister who both work with me at Adventure Antigua came with us too and enjoyed it which was very nice. All in all we had a great time and i am even more excited to have the yacht properly finished...soon! A special thanks to the ''crew'' that day as they didn't even know they were going to be crew. Also thanks to Kat and Karine for taking the photos.
Posted by 365 at 1:51 pm

Though she is not a yacht, but a vessel..a sailing craft built to earn her way, a yacht is for frivolity.

She looks great, by Jes, you think you got a handle on the work and yes there is more..!!! This is an aspect that in my mind seperates the spirit of sailing ...wood (lots of rewarding work...and sailing.

yes yes yes. i know you other caribbean classic sloop owners don't like the word yacht. Alexis told me off for calling mine a yacht already, but i can't help it. I have two ''boats'' already and like the sound of a yacht. I will try to call it a vessle but i am not going to ever describe her as a work boat. I know that goes against the whole ''carriacou sloops'' status quo, but to me ''work boat'' is too rough. Genisis can be called a work boat by Alexis and that's fine, but this one will be a vessle and even a yacht sometimes. lol
Will call you. I assume you are back in Antigua with your vessel?

Don't care what you call her - can't wait for my first sail on her!

Love your Yacht, Sloop, whatever. I was born in the Grenadines (father from Bequia, mother from Petite Martinique) and I have sailed back and forth between the islands many times on these real "working vessels", mostly without the benefit of diesel power, back in the 60's. Many of my relatives on both sides built and sailed these boats.
They were used mostly for fishing but often carried some "contraband" under the ice in their holes. Your stories and pics brought back a lot of memories, and its good to see that the craft is still alive. Good luck. As they say in Newfoundland , "Lang may your big jib draw".