"Gill netting" the biggest threat to Antigua and Barbuda's waters. 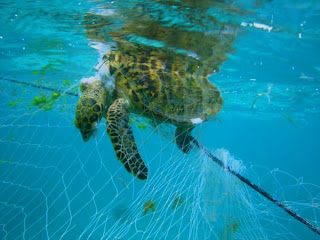 Almost every day people contact me one way or another to discuss some horrible environmental threat to our world. In Antigua I am known by some as an environmental "activist" these days and because of that i get people calling me about mangrove being cut or about turtles being harmed or about waste oil being discarded. You name it i get calls about it if it is remotely related to the environment. Of course Antigua is no different than anywhere else these days with regard to the buzz about Global Warming and Climate Change. Because of the type of business i am in I have to have a pickup truck. On any given day i am carrying something that nobody in their right mind would put into a regular car and so for the business I do need it. I would be heavily taxed to drive something like that in the UK and lords knows i would rather be driving something more economical most of the time which is why I have an ATV to do plenty of my moving around. That's a whole other story and i am getting a bit off track here as you would imagine after reading the above title. All of these environmental concerns that are brought to me on a daily basis are important and will have impact on our lives here on this little island, but to me there are more important things to worry about. Global Warming is happening and will mean all sorts of things. Reefs will die, habitats will change, and all sorts of bad things will happen, but I can't help think that while the majority of people are all yelling and screaming about Global Warming there are things that are being ignored that are more urgent.

You see, when someone says I have to stop driving my truck because it's impact on global warming will mean higher temperatures for oceans which will lead to coral reef bleaching I get so frustrated. I feel like asking them if they have ever seen a reef in Antigua. While people are jumping up and down trying to save the reefs by controlling emissions, they are missing the fact that they and most of the ocean is being killed by things not related to Global Warming at all and it's happening fast. Global Warming is an issue which in my opinion has taken way too much focus away from the nuts and bolts of environmental protection and preservation. Now I can just see people getting super frustrated after reading my last sentence, but let me make something pellucidly clear...... Climate Change is real as is global warming and we all have to be concerned and we have to do our part to slow it down. Many scientists believe it's all too late and even if we all stopped driving today the wheels of climate change are going to fast to be stopped. Some scientists believe that the only way to stop it is by taking drastic measures. This BBC article shows several bold measures that could make a difference or could make things worse (check here). Who knows? What i do know is that while Rome burns some people are messing about in my humble opinion. Our government here in Antigua is sending people (including my super smart sister Fran) all over the planet because Antigua chairs the G77 which is the largest intergovernmental organization of developing states. You can read more about them here. One of the main things they have been doing this year is discussing climate change and trying to come up with binding agreements. All very complicated to me, but i am sure that eventually good things will come of it even if the Saudi's get financial aid when their oil runs out????!!!???!!??!?!?! However! While our government chairs the G77 talks and sends its diplomats and technocrats all over the planet with the goal of trying to save it, our reefs and waters which are the live blood of our little twin island state are perishing and perishing so fast that in the last few years i have seen certain fish become extinct here in Antigua. In my blogs you will read about (do a search up on the left top corner) sand mining, reef protection, mangrove protection and the like and off of these things seem to go on unnoticed by our country's leaders. It's almost as if they don't care. There are some within the government's departments who understand the big issues and the big picture, but for whatever reason they can't seem to get the message across to the fat cats at the top.

To me, the decimation of our marine life over the past 5 years due to the huge increase of gill net use within the continental shelf (a.k.a "shallow waters") has been so horrible that all talk of global warming seems so petty and annoying to me. A healthy reef fish population is related to a healthy reef, which is related to a healthy shoreline and beach, which is related to a healthy fishery, which is related to a healthy tourism product, which is related to a healthy economy. The big picture is so simple to see if you just take the time to look and are willing to be educated ever so slightly. Antigua and Barbuda sit together on a large shelf and our reef systems although terribly damaged by storms in the 90s are large and cover a big area. The numbers of fish though are very low because of very little fishery regulation (or very little fishery enforcement). Fish traps are all over and none are regulated or monitored properly. Gill nets which have been in use here for decades are more prevalent now than ever and are being used at various depths on the shelves. Some are being used off the shelves too in depths of up to 1000 feet. Very little escapes a gill net and there is no proper species targeting which is why they are banned in most countries. Read this little blurb about banning nets in New Zealand. There is so much fish being taken at the juvenile stage that I am sure that a collapse of certain species is immanent. History repeats itself over and over on this topic which is another thing that drives me crazy. Gill nets are banned in most 1st world countries as well as in many 3rd world nations to protect the environment, but more importantly to protect the fishery. Most fishery regulations are made to make sure that the fishermen can keep catching fish at a sustainable level. There is no concept of sustainable fishing here at all, and the main reason for that i suppose is that the people at the top just don't have an idea about our own fishery. I have met many people within our Ministry of Fisheries over the past two years and think that most of the people working within the department care about our country's fishery and understand the need for controls which work toward sustainability, but for some reason the people at the very top are not getting the message or the right info. One head of the department went on record saying that there is no problem with gill net use in Antigua and that there is more damage being caused to our fishery from recreational fishing. To hear that point of view coming from someone at the top of the department is very scary to put it mildly. It means that they don't spend any time at all on the water around Antigua and Barbuda at all and therefore don't know what's going on. Unless gill nets are banned or heavily regulated my unborn children and grandchildren will only know of reef fish from stories. This goes for the people using the nets too. The sad reality is that it isn't just fish that are being killed by gill nets. When an endangered sea turtle swims into a net it usually is killed within twenty minutes. Conch, lobster, dolphins, sharks, rays, corals both soft and hard, anemones, birds, whales and all sorts of other life can be killed in nets which have either been set or discarded. I just can't understand how our fisheries bosses can think that they don't cause much damage. Here are just a few pics of gill nets in Antigua. I am going to take more photos and make more noise about this cause because this has to be stopped in order to protect our future fishermen and to protect our island as a whole: