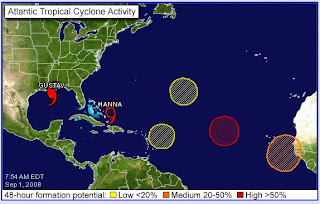 The picture on the National Hurricane Center's website looks like this is in fact September. There can be no doubt that this is the most active month in a year's summer hurricane season. There are six systems that are being followed by the NHC. Thankfully only one looks like it could possibly be a storm threat to the Eastern Caribbean at the moment. The terrible Gustav which killed people in Jamaica, DR, Haiti, Cuba and probably in the USA today is now moving inland to meet it's own fate. Tropical Storm Hanna moved on well to the north of Antigua and Barbuda giving us some much needed rain before making landfall over the Turks and Caicos islands yesterday.

Thankfully it is only a tropical storm. That will change according to forecasts from the NHC and it looks like it may end up as a hurricane as it hits North Eastern Florida. Let's hope it doesn't get too strong. Then there are two other systems in the Atlantic at the moment that people are checking.

Invest 97L which is a strong tropical wave looks like it will pass to the north of the Caribbean as did Hanna did, but we will keep looking at it. There is another wave way north up by Bermuda but that's no threat down here either. What I am concerned about at this early stage is the one that is still coming off Africa.

Invest 99L is a big area of disturbed weather that we here in the Eastern Caribbean will have to watch carefully over the next few days. Antigua and Barbuda has not been hit by a hurricane since 1999, but this season is looking active and I am worried that our good luck may get tested. Will keep you posted.
Posted by 365 at 7:40 am