Recently we decided to go down to St. Martin to have some minor repairs done on the boat. The trip was supposed to be a very quick one leaving early Tuesday morning and returning on Thursday which would mean we would have one full day in St. Martin to get our stuff done.
Adventure Antigua crew Tony and Jason came along as well as friends Guili and Glen. We cleared out from Jolly Harbour customs and immigration the afternoon before and met up at 4:30 am the next morning in the dark. When we go out the harbour the winds seemed to be blowing out of the north east at about 15 knots which was great for sailing to Saint Martin 89 miles to our north-north-west. After everything was set up and we were under way with Tony at the helm and the sun rising I decided to go and have a nap below.
I didn't sleep much if any and after a while i felt the boat start to rock and roll more than it had done so far. I also noticed through the cabin hatch that the sky was turning dark again. A squall must be approaching and Tony would need help.
By the time I got up top the rain was just starting to fall and the winds were blowing about 25. 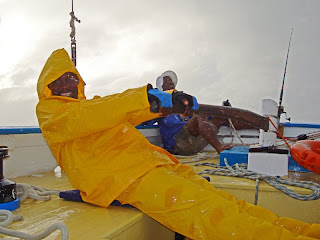 Tony was struggling to keep the boat on a broad reach as she tried to round up into the wind. We had far too much sail for those conditions, but it was too late to reef them (make the sails smaller). Anyway, the winds had peaked and Tony was managing to hold her steady even if it was with great effort. Tony is one of the strongest guys i know (pound for pound). I went back below to snap a few photos of the boys in the rain. 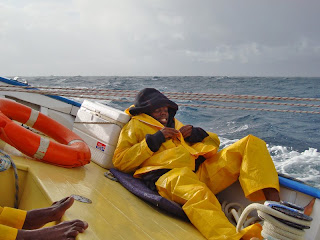 After the squall, as is usually the case, the winds dropped down and sailing was very easy once again. It was sunny now and We could see Redonda, Nevis and just make out St. Kitts. The seas were a choppy 4-6 feet and there were flying fish everywhere. 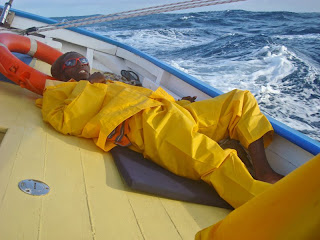 After an hour or so we saw another squall coming and this time the winds hit us harder than before with gusts up to 30 knots giving me loads of weather helm
I took over from Tony and struggled to keep the boat on course wishing that we could reef the main to make it easier and safer. Guili was on the main sheet trying to depower it as best he could as the rain and winds tried their best to overwhelm us.
This time after the squall had passed the winds didn't back off and we were left sailing in more wind than the boat was designed to carry those sails in. Without gloves, my hands would have been rubbed raw by the tiller and i was very happy for them. After about two hours i was exhausted and asked Tony to take over. He didn't last that long and I was back on again. This time i asked Tony to help me hold the tiller as it was just too much for me. After a few more hours we finally saw St. Barts way off in the distance, but as we saw it the winds picked up more. 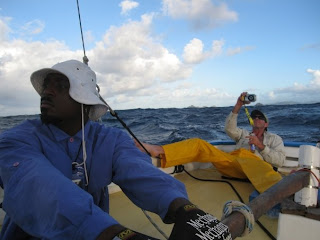 Now that we could see land ahead of us i felt comfortable giving Guili the helm for a while. Many people find it hard to sail in a straight line out at sea if they haven't had much experience, but with land ahead I knew Guili would find it easier. He did a great job but needed a bit of help in the strongest gusts. 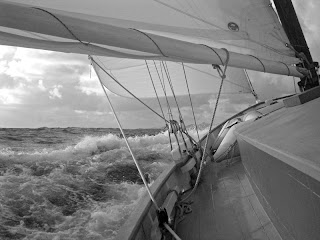 Along the way we managed to catch several small tuna and a few cuda as well, but slowing down to bring them in was far too difficult. After the last fish we kept the line out of the water. None of us had ever seen as many flying fish leaping out of the water and gliding left and right. The winds didn't ease up until we were in the lee of Gustavia 12 miles from Saint Martin's south eastern tip. 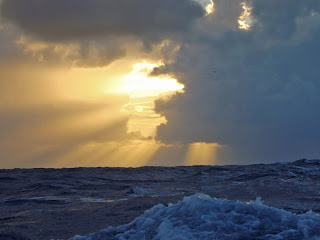 Once we were in the channel again the winds started to howl. It took us exactly 12 hours to sail from Antigua to Saint Martin averaging 7.5 knots, and on a traditional wooden boat I think that was very fast. There was a two hour stretch where we never went slower than 9 knots and we hit many tens and quite a few elevens. Three times while surfing we went over 12.5 knots which i doubt i will see again for some time. We were exhausted by the time we approached Phillipsburg just at sunset. It's a good thing we didn't arrive at night as they were dredging the harbour and massive dredge pipes were where the normal channel was. Just after dark we managed to get a spot next to a tug boat at Bobby's Marina. It was too late to clear in so we just had dinner and crashed. IT had been a very long day and we were all spent.
Posted by 365 at 8:49 am

Hi,
this is mohit ur blog is very nice keep it up and mu blog url is RKM Blogging

Wow great tale Eli, I sailed the other way from St. Maarten in one of the little Colonna Yachts and it took us about 15 hours or so, so the old classic goes very well then. Not only that she is ten times nicer looking.

Afraid I won't make it out to see you as I had hoped as Lou is home on this week, but one day I will be back. In the mean time I will keep reading.

I have visited your beautiful and stylish website..And I can suggest,


Please put mine, and tell me your link(complete linking info), my e-mail is mceselko@gmail.com, I'll put it immediately...

Your travel stories are always interesting, to say the least....