The Antigua and Barbuda election results. 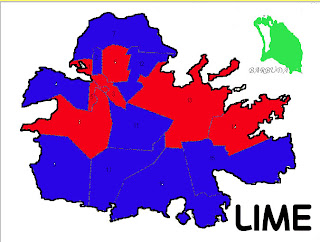 The UPP won the election in an extremely tight battle where they ended up with 10 seats including the BPM seat in Barbuda against the ALP's 7. For more specifics on the vote you can goto this site where the above image came from. Two seats are being contested by the ALP and with countless last minute issues and problems associated with the voting process I am sure that there will be plenty of drama in the near future. Lester Bird reported in a Daily Observer article that they are contesting two seats because of issues which he said disrupted the legal voting process. Some voting started 5 hours late! It was said that there was fighting in Barbuda yesterday where that seat was one by one vote with 11 spoiled votes. What it means generally for our country i don't know for sure, but with the UPP in power running the country as usual it is my strong opinion that the environment suffers and the cost of living stays higher. The good news is that several of the ALP guys who the nation thinks are crooks will not be in control, and this I think is what won the election for the UPP. Personally, I think this was a lose lose election for our people and many of us closed our eyes and put our "x" down wherever it fell.
Posted by 365 at 11:32 am