One week before the fishing tournament

One week from now Team Xtreme of Adventure Antigua will be on the way to start fishing on Day 1 of the 43 Annual Sport Fishing Tournament. Over the last week there has been plenty of trash talking with the winners of last year's tournament, Blue Rapid, with skipper John Fuller (my dad) saying that they will win easily and beat us any day any time. hahahaha not this time. They scraped through to win last years tournament with two young kids on board and a bunch of geriatrics limping around behind them. HA! They don't have the kids this time to help them..
The "chairman" says that our team won't be happy with some of the changes they have made and talked plenty of trash in the feeble attempt to try to throw our concentration off. 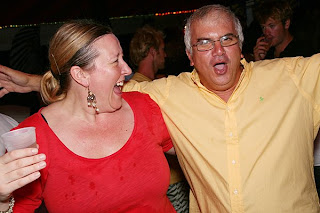 We have been hearing trash talk about this tournament for a year and it has made our team even more determined to go out there and look for the biggest marlin ever caught in our waters. That's our only goal in this tournament and given the chance we will do it. Tony, Guilli, Big John, David and Garvin are so "amped" that I can hardly contain them. They are like raging bulls trying to get out and cause havoc. Here you see Big John on the left and Guilli on the right. The most desperate fisherman on Antigua and the chairman of the Antigua Barbuda Sport Fishing Club is in the middle. The photos were pulled from the club's site and were taken on the opening party for the tournament which was held last saturday. 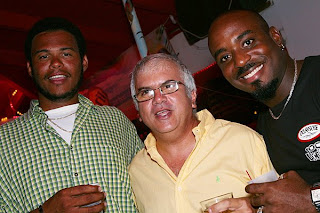 We went back out East of Antigua several days ago and found four Guadeloupean FADs which are excellent places to catch marlin. In five minutes we are leaving once again to go look for both marlin and Fads in one last practice session. Like the kids say "Its on like Donkey Kong"!
Posted by 365 at 6:52 am

Aww Eli! Just remember that some of those geriatrics only have around a 20 year lead on you!