Sailing down to the BVI from Antigua

At the end of June three of us sailed Ocean Nomad, our Classic Carriacou Sloop down to Virgin Gorda in the BVI to take part in a week long windsurfing regatta and sailing adventure. HIHO (which stands for hook in and hold on) is a world famous windsurfing event that has been going on now since the 70s. This year was the 25th time the event has been put on and with our own sloop for accommodation and transport was looking forward to the adventure.
With just three of us, preparing for the trip was easier than other similar trips i have been on. The last time we wend it was pretty much the entire Adventure Antigua team and more! This time we packed all of our gear the day before and had a fairly relaxed departure before sunset bound for St. Martin just over 90 miles down wind from us. I love cruising down wind at night as there isn't many things as relaxing and peaceful in decent weather. The weather was more than decent with very little cloud cover and a nice 15 knots of wind to keep us going. Neither of my crew were experienced sailors but both were very experienced power boaters and I felt very confident with them on board. Since we were going to be away from home port in Jolly Harbour for two weeks and there were going to be several big crossings we prepared a "grab bag" which most boaters have close by when sailing in open ocean. We had a small inflatable dinghy on the deck, the EPIRB and all the other regular safety equipment.
Our grab bag was huge and we decided to tie it to the tender which was on the forward deck ready to go in case of a dire emergency. The bag had enough survival stuff in there to last a long time. We all felt as though we were going too far with the safety preparations but ya never know. A guy i used to deep sea fish with as a kid always used to say "its better to say here it is than where it is" and I always think that's the right way to prepare. 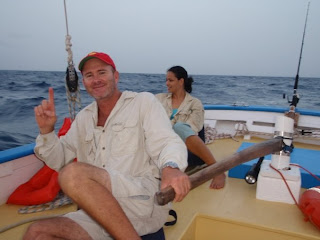 As soon as we sailed out of Five Islands Harbour we were full of smiles and eager anticipation. David "Choppa" Mendes who has worked with Adventure Antigua on and off for years was on board and even more excited than usual (which is hard to imagine). The African dust in the air was pretty extreme and within a few miles Antigua was hard to see. 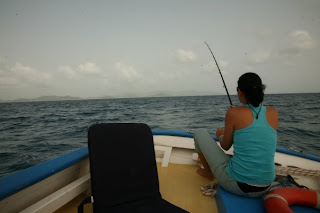 In fact, by the time Mykl hooked into her first fish we could hardly see Antigua. It was a Spanish mackerel and we released it. We already had dinner sorted out and there was no need for fresh fish this time. 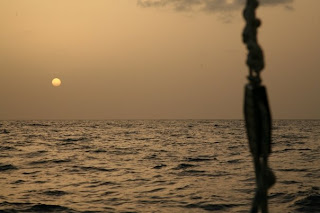 Sunset was a strange one with the dust in the air and you could look directly into the sun while it was still high above the horizon.
As it got dark some stars managed to push through the haze and it got brighter and brighter as the moon came up. The winds backed off a bit but it was still enough to push us quietly along at 7 knots on a very broad reach towards SXM. We took three hour shifts on the tiller and with all those stars, the phosphorescence, and the "Just cruising" play list on my IPOD I was in heaven holding on to the tiller.
At one point in the night while i was steering I saw the most amazing shooting star i had ever seen. It started off above my starboard side and shot down towards the sea in the north breaking apart like a big "Stanford" firework that we used to see at all the 20 20 cricket matches. Mostly it was white but there was green also as it broke up. The whole boat lit up as it fell and although i was excited to have seen it, I was sorry that the other two who were fast asleep at the time had missed it. David took over afterwards and before dawn Mykl took her turn. As you can see, the sunrise was as strange as the sunset with all the dust making the sun almost look like a rising moon. Within a few hours we would be in St. Martin ready for some more provisioning and a huge creole lunch with some friends there. Clearing in and out of immigration at Simpson Bay was a breeze and we actually bumped into AnnP of http://www.antiguacaribbean.com/ and http://www.antiguabliss.com/ and many other tourism and travel related sites. She had just come back from Anguilla next door. During the day we got some bits and pieces for the boat including a nice fan for the forward bunk and some new lights for the head. St. Martin is always cheaper than Antigua for marine parts as it's a duty free port. We replaced broken or tired bits on the boat and had a big dinner before pulling anchor and heading out to sea once again, but this time it was dark when we left. As we pulled out of Simpson Bay we could tell that the winds had dropped and as we set the main we realized that we would be lucky to average 3 knots without the engine on. We immediately decided to motor sail and off we went at 6 knots. The sea was so calm that it felt strange to be out in the open ocean and hardly rocking at all. Not long after we left we saw a huge search light on the horizon come on for a minute and then go off. I couldn't tell how far away it was as we have no radar but I told David that the coast guard must be doing something out there. Since we hadn't slept much the night before and had been running around a very hot St. Martin we were very tired. Once we were on our way and everything was settled it was my time to go on watch. We decided we would try three hour watches again I only managed about an hour before i started to fall asleep. I struggled but with it being so nice and calm it was even harder to keep my eyes open. Mykl had told us to have a nap before we left but we had decided that we needed to be on the move to the BVI. She was right. We should have slept! I woke David up and told him that he had to give me an hours nap. He didn't even last an hour before waking up Mykl who ended up steering for several hours. Girl power! While she was steering i heard the some talk on the VHF and Mykl said there was a spot light on a few miles away. As we listened to the VHF we heard someone say "This is US Coast Guard west of St. Martin, can the boat in the spot light please identify yourself and your flag". They were inspecting boats out there and Mykl said this was the second one she had seen get the spot light treatment. The US coast guard was out there without any navigation lights, creeping up to boats and hitting them with the flood lights. We were sure we would be next and for the next few hours we kept looking over our backs. Mykl said that before she had heard them on the VHF she had this weird feeling that there was a boat next to us, and i am sure she wasn't far off. With night vision equipment and all the high tech gear that they have, I am sure there was a good reason why we didn't get searched. Our boat is so unusual looking that i was certain we would have been of interest. Anyway, we didn't come under the spotlight and powered on to Virgin Gorda. Like the day before sunrise was slow and not as bright as it usually is. With about 5 knots of wind the sea only had a small chop and we cruised along. Several unfortunate flying fish had managed to get stuck on the boat during the night and i returned them to the sea as we spotted Gorda in front of us. As we approached the reefy channel just south of the famous Baths we had a dolphin come and play at our bow for a few minutes until it got bored and swam off into the blue once again. What a nice welcome to the BVI! We were all tired and felt like a swim before going to clear in with immigration and customs at Spanish Town. What better place to have a swim in the Virgin Islands than at the Baths in Virgin Gorda? 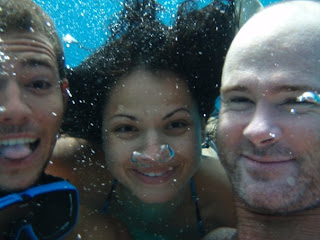 It was so refreshing that within no time we were ready to enter the islands officially. It had been a lovely trip down and a week of BVI Adventure was in front of us.
Posted by 365 at 8:45 am