A new Restaurant on the North side of Antigua is opening 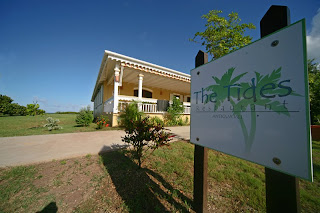 My uncle Nick who is known usually by "Doctor Fuller" is a workaholic and a very productive one indeed. A medical doctor by profession, he has many other passions, hobbies and businesses. His latest project is probably his most challenging, but I think will be the most rewarding. He's no stranger to challenges as he's been facing them since he was a teenager. My grandfather was no easy man! The Tides is his new restaurant and will open Wednesday night for the first time to paying clients. After this coming Wednesday night The Tides Restaurant will open Thursday, Friday, Saturday, Sunday and Wednesday for lunch and dinner. If you would like to be one of the first to "taste their hand" as they say here in Antigua then please give them a call on 462 TIDE.
The restaurant was designed exactly as Uncle Nick wanted and more importantly exactly where he wanted. Dutchmans Bay is where several generations of Fullers grew up. In fact my Dad was born just next door on what was a US Base once upon a time. There are videos and endless photos of my uncles and aunts playing on this windward facing beach. My earliest memories of life on the island are all from the beach there, and for a long time it felt like our hidden secret. Some people don't like windward beaches with all the flotsam and jetsam that float up and much prefer the totally calm and spotless beaches found on the lee side of these Caribbean Islands. I guess I'm different because i have always loved beaches like Dutchmans, Jabbawock and Half Moon Bay. 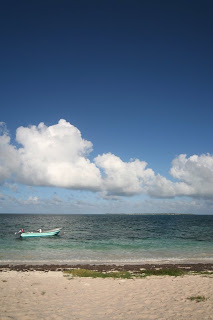 That fresh breeze that's just come across the atlantic over the ocean is hard to beat. With all the family history and fond memories associated with Dutchmans Bay I was delighted when i heard that Nick was going to buy the extra land he needed to build a restaurant. Already, my cousin David and his wife Erin had developed the space that was once the famous Bucket of Blood Disco. Of course you have to be over 50 years old to remember the days when the hottest and most happening disco on the island was The Bucket. Hurricane after hurricane in the 90s finally finished it off and my cousin David ended up developing the area into Dutchmans Bay Cottages. If you are coming to Antigua and want a peaceful place to hide out please have a look at the website before you decide on where to stay. They even do rooms for a day which is perfect for those who want to check in to their flight and have a nice relaxing day just five minutes away from boarding time.
Anyway, Uncle Nick spent every last cent he had saved up and poured plenty of it together with a mix of blood sweat and tears into The Tides. It sits very close to the ocean which gives you a panorama of the entrance to the North Sound with all it's little islands in the distance and nice trade winds to cool you down. Designed to make the most of both of those things, The Tides is what i would describe as a modern colonial type building. Because it is so close to the sea, the foundation was supported by dozens of concrete piles which go way down into the sand. Speaking of sand, a huge amount of sand was imported to build up the area around the restaurant and if you look carefully you can see the tiny pink shells which help to make up the sand. Because almost all of Barbuda's exported sand is used for concrete mixing and construction, I think very few people buying Barbuda sand actually put it on a beach. The place is finally finished to the point where it can actually open. 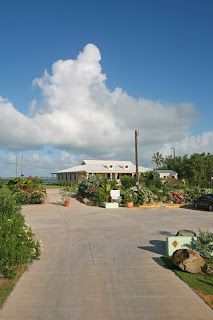 Of course Nick will be up there trying to make his small garden as impressive as the building, but for now it still is a lovely place. "Didier" is the manager of the tides and brings a wealth of experience in Food and Beverage management after working among other places at the prestigious Blue Waters Hotel and The Gallery in English Harbour. Their Chef was the number two chef at the five star Carlisle Bay and has impressed both Didier and Nick with her skills. I hope to be as impressed later today when the majority of the Fuller family and some friends will be invited to lunch. To be honest, I don't even know what kind of food theme it will be, so this will be a big surprise for me. The restaurant is on the water and has quite a nautical decor inside which is not surprising if you know uncle nick's many hobbies. Today we are the guinea pigs and the most willing ones you will find indeed. I know it's going to be hard to give a proper balanced critique, so i will try to take my camera to help me to the job. More to come soon.
Posted by 365 at 9:13 am

Congratulations to Dr. Nick! What a great location, and a wonderful idea. I wish you all the best in carrying on the great Fuller family tradition!

spoke to friends today who had gone to last night's dinner... everyone said it was awesome.. magical evening with moonlight on the water... great service.. great food! seems The Tides is off to a rocking start!

Having read about the opening of the restaurant, I was wondering if the aforementioned "Bucket o' Blood was once the accommodation to the Hotel annex? I was one of the UK Royal Air Force Detachment based at the Hotel in 69 or 70, when there was a "revolution" in Anguilla. We had a marvellous time on Antigua, quaffing many Tom/John Collins at the Bar and I remember that the Rooms had Gravestones as coffee tables, the LIAT Cabin Crew wore micro skirts and Rum was 2/6 pence a bottle from the local distillery! We wired the Hotel power supply around the meter to assist the Owners reduce costs!!! Happy Days!
With Wonderful Memories,
Rick Stephen,
Wellington
New Zealand

Having read about the opening of the restaurant, I was wondering if the aforementioned "Bucket o' Blood was once the accommodation to the Hotel annex? I was one of the UK Royal Air Force Detachment based at the Hotel in 69 or 70, when there was a "revolution" in Anguilla. We had a marvellous time on Antigua, quaffing many Tom/John Collins at the Bar and I remember that the Rooms had Gravestones as coffee tables, the LIAT Cabin Crew wore micro skirts and Rum was 2/6 pence a bottle from the local distillery! We wired the Hotel power supply around the meter to assist the Owners reduce costs!!! Happy Days!
With Wonderful Memories,
Rick Stephen,
Wellington
New Zealand

Wow, I remember the Bucket of Blood. I spent 6 months living at the Sugar Mill Hotel while I started up the Antigua Times for the late Rowan Henry QC. Happy days and many friends made. A few snaps here: https://flic.kr/s/aHsjsaHqCK