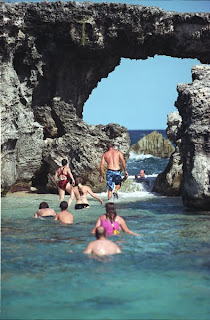 1- For nearly eight years I have been asking the different government representatives that have come and gone for some help regulating certain things about the way excursions are presented and the way they are sold. Minister after minister heard me and others in the excursion business speaking about many things we felt were unfair, but nothing was ever done. Specifically here on this blog we will speak about excursion companies being directly involved with the sales of tours. It's important to first point out that the average sales commission for tours like ours is 20%. That deposit that you pay your rep or tour desk isn't a deposit for the excursion company. It's a commission for the person making the phone call. In some cases we are paying 30% commission and I know others who are paying over 50% for some of their tours. Over the past ten years a few of the largest excursion companies have moved sideways into tour handling a.k.a. "ground handling" and tour sales. It is alleged that Tropical Adventures which is one of the biggest excursion companies has shareholders who are also shareholders of Sun Tours which handles all of the Virgin Holiday repping on the island. Many people complain that Virgin reps here in all the hotels predominantly push Tropical Adventures tours which include The Excellence trips, the Jeep Safari tours, The Tiami or Mystic sailing catamaran, kayaking and other tours. They are the biggest and most diverse excursion company and it was a very smart business move for them to also allign themselves with the biggest handler of tourists coming into our country. I don't know how many Virgin Holidays guests come off those 747 jets but you see their reps with their nice red and pink uniforms in all the hotels. Whenever our boats are slow Tropicals seem to stay full. The excursion companies complain about what they feel in an unfair advantage. Virgin does sell Adventure Antigua, but I know many tour companies that say they get no sales from them. It's like Donald Trump says though.... "It's nothing personal. It's just business"! In order to survive, Wadadli Cats was forced to do a similar thing. They formed a company called NX Tours to run tour desks in the hotels. Many hotels that didn't want to deal with staffing and organizing the sales of tours farmed out their tour desks to NX. At one time they had tour desks all over the island from St. James Club on the Atlantic side to Jolly Beach on the Caribbean. When a guest came to the tour desk and said that they would like to go snorkeling, you can imagine what tour would be the first one presented. This kind of business is common all over the world and locally several other companies followed suit. Recently Bo Tours purchased a catamaran and went from being a ground handling company to also being an excursion company. The next big move was that hotels starting buying their own boats and doing their own tours.
What does all this mean? Well it has many impilications. The first thing it means is that people who come to Antigua will be given a very slanted version of the available activites. The other thing which I have always been afraid of is that the smaller guys get marginalized. Which tour desk or ground handling company is going to tell their guests about a little glass bottom boat tour that costs US $40 and pays a US $5 dollar commission? It's terrible but the reality of presenting tours and selling tours to guests in these islands has changed for the worse in my opinion. Some of these ground handling companies now are coming up with a list of crazy policies which make it even harder for small companies. At the end of the day Adventure Antigua has had to make changes to their policy. My personal position remains the same, but my company's policy has been forced to change. The old addage of "if you can't beat them, then you join them" seems to fit here. A company called Antigua Adventures has been formed to pretty much do the same thing as Bo Tours, NX Tours, Sun Tours and the rest of them. Antigua Adventures is slowly moving into the market by running a tour desk first at Verandah Hotel. The Verandah Resort and Spa is a carefully designed hotel sitting in Dian Bay. For more info on this very cool resort you can check their website here.
For now Antigua Adventures is learning how the tour desk has been operating before making any huge changes. One of the biggest problems on that side of the island has always been the huge additional cost of cab fare. We are working on several plans to make this less of a burden on the guests. The other big problem we have noticed has been that there were so many tours being sold a the resort that people had a hard time deciding on what tour was best. We have cut some tours that the Management of the hotel felt were unsafe and we will also be trying to give the guests the best value for money that is possible while making sure that they are offered the best of the tours available. We are not just pushing our tours, but for a change guests at this hotel may start to hear about Adventure Antigua.

2- Adventure Antigua has always felt that we were going to be different from all the other tour companies by offering tours to small groups. Our biggest boat eventually got to be the 52 footer that we run the eco tour. It was built in the USA to carry 49 passengers, but we designed the layout to keep it around 25 people. Even at 25 guests we had many compaints from the old Eco Tour supporters. Seen here our old eco tour (done on our second eco boat which is now in the Indian Ocean) took a maximum of 10 guests. 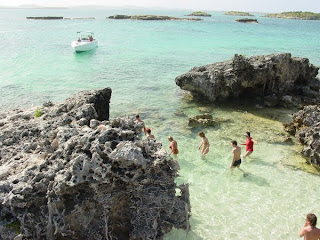 Before that boat we had one that took only 4 guests. That's how we started out!! Lunch in the old days was pretty cool as seen here at Bird Island, but not that great when it rained as you can imagine. 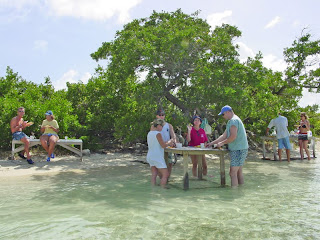 Now of course, we have the Eco Tour powercat here:

and the Xtreme boat here:

and the Classic Yacht here:

What we have found is that there still so many people out there who like the big catamaran tours and this month we have decided to further diversify our business in order to meet that demand. It's not exactly our forte, but after all the lessons we have learnt in what is nearly ten years of operation, we feel that we will be able to offer an excellent sailing catamaran tour. Our newest boat "Dolphin" is currently in Jolly Harbour undergoing some rennovations and should be ready to do it's first Adventure Antigua catamaran cruise before the new year. Plenty photos and info to come! For now here is a little one that kinda gives you an idea of what it will look like: 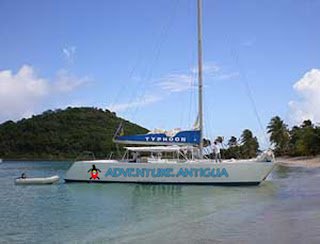 We are all very excited about this change because we feel that with the addition we will be able to reach a wider group of holiday makers and therfore spread the Adventure Antigua quality around a bit more. IF you have any questions or suggestions about our new hotel business or about our new catamaran..... or anything to do with our company please contact me on eliantigua@gmail.com
Happy Holidays!
Posted by 365 at 8:49 am

Big news!!!
Congratulations, and here's to it all being a great success for you :)

wow Eli - congrats - will give you a call to get the info - this def falls into the NEWS category - we'll get it on todays newsletter - have you got any bigger image?

Eli, catching up after weeks away. I understand why you're doing what you're doing, and wish you the best with both ventures. I remember Isis fondly, but can't imagine how anyone can complain about Adventure Antigua - you never exactly feel crowded or ignored! I wouldn't be anxious to go on a big cat tour, but that's exactly what some people want - they're very popular cruise ship excursions, and I'm sure you'll put your own stamp on them. You'll be taking bookings from cruise ship passengers, right? If I know when those tours are starting, I can probably find a way to put it in a posting on the cruise boards without violating the rules to the point of having the post pulled.