Fixing a prop shaft on the catamaran 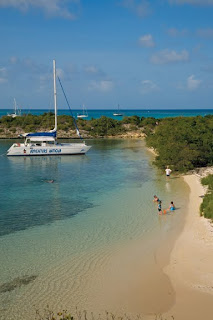 The day before we collected the Dolphin Catamaran for the first time, the Captain at the time told me he had an engine mount break. They did the work and fixed it by the time i went up to collect the boat. As soon as I put the starboard engine in reverse, I noticed some vibration coming from that engine. Upon inspection I could see the engine had quite a bit of movement. I called Carl Mitchell at A1 Marine down in Jolly Harbour and he told me to bring it down for him to have a look at. The first thing he noticed was that the "coupler" (part that attaches the engine to the prop shaft) was slightly bent and actually the wrong size too. Anyway, Carl and his team did quite a bit of work changing parts including other engine mounts that were broken. The engine was out of alignment too. Since the shaft was significantly larger than you would have expected on a boat this size we didn't think that the prop was also a problem until after we tested the boat once again. There was still some vibration but it seemed much better than before. The reason it seemed much better was that all the mounts were like new now and the coupler was the new and correct part. Anyway, we used the boat for the past few months knowing that there was still some vibration. I checked the alignment once with a mechanic friend who was out on the boat with me one day and he said that it was fine. Anyway, this past weekend we noticed more vibration and I made the trip back down to see A1 Marine after i noticed broken mounts again. Carl said this time he would check the shaft first before doing anything else. While still in the water a diver went over the side and pulled out the shaft as someone in the engine room put another piece of shaft in the stern tube to make sure no water came into the boat.
Once the prop had been removed and the shaft had been totally cleaned it was then put into the huge lathe so that Carl could check for a bend. Even before we got that far, I could see the bend near the prop. 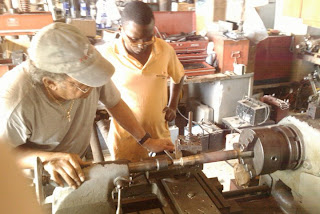 Who knows how long the shaft had been bent, but the prop showed no damage. It could have been that way for ages. Anyway, this shaft was a European 40 mm diameter shaft and one that would be impossible to find in Antigua. As is often the case in the Caribbean and other "third world" areas, a part is fixed before it is replaced. A foreign yacht skipper came in and told Carl that it would be a miracle if he managed to straighten that shaft. We knew better about Carl's life long engineering skills. With a crack of noise the blow torch burst into life and the shaft was heated right in the area of the bend. For a few hours the shaft was heated and slowly bent back into shape. It was a very difficult job and one that few people would have attempted. Before the sun set the prop was back on the shaft and the diver was in the water pushing it back into the boat. During all of this "Junior" had taken the engine out and fixed or replaced all the engine mounts. By the time the shaft was back in the boat, he was ready to align the shaft and engine. As the amazing colours of another Caribbean sunset told the story of a long hard day, it was time to test the work done. She started up and I eased the engine into gear. All seemed fine at first, so i pushed the RPMs up a bit. No vibration felt and I went below to look at the engine. It was perfectly still and I came upstairs to tell Carl that we could balance a Rum and Coke on it just fine now! Once again Carl Mitchell and A1 Marine saved the day. It saved me thousands of dollars in parts and also in tours. Today we have 42 people from a cruise ship.
Posted by 365 at 8:03 am