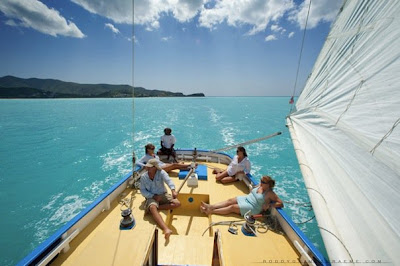 The racing this year has been tough for many boats with strong winds and blustery conditions. After not having rains for months and months, Antigua finally got some! We got quite a bit actually with inches falling over the past week mostly falling later in the afternoon and at night. Yesterdays conditions were windy enough that many boats didn't put their "chutes" up. As you know if you read my blog a few days ago, I am not racing this year, but Jason, our main sailing crew is out there racing on Ocean Nomad.
Slightly rusty and not having the proper sails, they finished fourth the first day but with better sails and the crew more experienced they pulled a close second on the second day of racing.
The racing today is cloudy and fairly windy once again and they should have another close day of racing. Check the results here later. If you can make it you should come down to the Antigua Yacht Club Marina to see all the Classic yachts. There are ten Carriacou Sloops (traditionally built wooden Caribbean boats) racing this year and each is alongside the Skulduggery bar. As usual there is plenty of interest surrounding these colourful boats, but slightly more this year with the Pink Lady taking part for the first time. Pink Lady is owned by the Palm Island Resort which is where my wife and I recently spent a few nights during our honeymoon. Palm Island is part of the Elite Island Group of hotels and resorts which also includes Verandah, Galley Bay and St. James Club here in Antigua. The top boss had told me sometime in the Fall that he'd have the boat up here being run by a bunch of ladies. I wasn't sure it was going to happen, but sure enough there is a pink boat sailing in this years event skippered and crewed by a bunch of female pirates. The eye catching crew of this Palm Island boat can actually be heard before you eyes are drawn to them. WOW! Those girls are real "sailors" and are taking the "traditional" sailing and partying theme to the outer reaches of imagination. There was a funny little story and a bunch of photos on the antiguanice.com site the other day. (click here) Baywatch meets Pirates of the Caribbean!!!
Will speak to Jason a little later to see how it all went. Tomorrow is the final day of racing.
Apart from the regatta, people here are also watching developments of the European No Fly Zone which has cancelled all trans Atlantic flights since Thursday. Our Adventure Antigua bookings have slowed dramatically as is expected. I understand that British Airways has already cancelled their flights for tomorrow too. With a very active volcano only 25 miles away, I don't think anyone here expected that we would be severely effected by one thousands of miles away. The hotels and tourism sector here which is the backbone of our economy is praying for the flights to resume ASAP.
The photo above was done by Roddy Grimes-Graeme of http://www.acquafilms.com/ when we were out sailing. His team of video and photo people are out covering the regatta for the main sponsor.
Posted by 365 at 11:48 am