I'm not crying wolf, but the shark email going around is a hoax!

People have this obsession about sharks and one day i blogged about shark attacks around the world, the Caribbean and Antigua (click here). As you know if you read it, there has never been any shark attack around Antigua. Someone was bitten by a little reef shark in Barbuda while they were spear fishing late in the afternoon in Barbuda. A bag of bleeding fish in the old days when the reefs were fully alive wouldn't have taken long to attract some sharks. Anyway, over the past week there has been a horrible email being sent around titled "shark attack in Antigua". The first pic is a lovely photo of a great white shark showings its jaws for the camera. We don't have great white sharks in the Caribbean as the water is too warm. Since the waters are warmer than usual then even less likely.


The rest of the photos show a horribly disfigured young woman in a blue bikini. The extremely graphic photos make you want to gag and i never understand why people send those kind of images around to all their friends. In this case I wanted to see them because I hadn't heard about a shark attack in Antigua. Nobody here had because we did not have a shark attack in Antigua.

Upon close inspection, i could see that the unfortunate lady looked like she had the tell tale scars of propeller damage as seen on manatees up in Florida here: 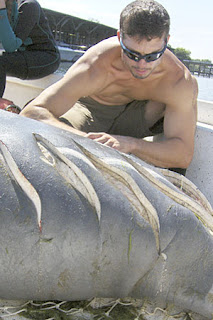 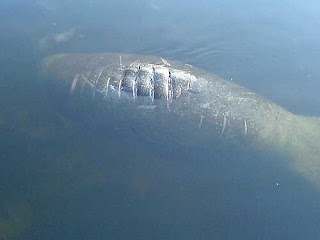 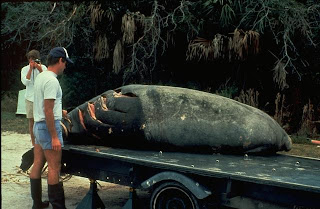 The close long gashes looked like those we found on a turtle that had been hit by a boat last year. Anyway, i searched high and low for info on the net about a young woman who had been attacked and killed by a shark, losing an arm in the process. The photo showed her arm severed but on the beach next to her without any other scars on the arm.

Why someone would go so far as to email the photos around, put them on forums and tell the world she was killed by a shark in Antigua is beyond me. Some people are really sick.
Posted by 365 at 7:17 am

Maybe its some kind of sabotage. All these ex Stanford customers who want some kind of retribution may think this is another way of affecting tourism on the island.
BR

Eli, you should send the email and your proof of hoax to snopes.com.

They are trying their best to sabotage our tourism industry.... tell them if they dont have anything good to say shut up.
Johnny Jno Baptiste