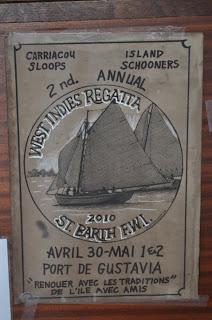 If you follow the blog then you know team Adventure Antigua went to the West Indies regatta in st. Barts recently.The team for the sail down was Jason, JD, and myself, but we were also joined by some of the http://www.acquafilms.com/. Iain, Pat and Sarah were going to be taking part and helping out in the regatta with Iain doing the filming specifically.
I usually like sailing downwind at night as i find it quite relaxing and quite beautiful. It was only 90 miles or so down to Gustavia, and we decided to have some dinner at the Al Porto before setting off into the starry night. The winds were about 14 knots once we got outside the lee of the island and we sailed silently and comfortably through the night.

At dawn we could see St. Barths in the distance and we decided to put up the big downwind sail as a bit of a practice. Usually we race with Nikolai as our "rock star", and while i stay on the helm dealing with tactics, nick runs everything else. Jason, as usual said he knew everything about it all and could do it by himself. This turned out to be mostly true with the exception of him having the wrong sail. We had two of the downwind sails made as the first one was too small. I had put that one in storage, but Jason insisted that the one in storage was our racing sail. As soon as we finally got it up, I could see that it was too small. A good thing we were not racing!!! After a good bit of teasing JD, Jason and I dropped the sail and got the other one ready. Up in went and as we sailed down the South East coast of the beautiful island of St. Barths the sail looked as beautiful being poled out by our "big bamboo".
This image was taken by http://www.photoaction.com/ during the Antigua Classic Regatta last year, but gives you an idea of what it looked like on a tighter reach with no need for the bamboo. 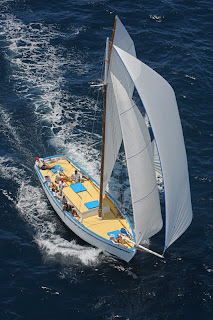 Once we arrived in St. Barths we tied up alongside some of the other West Indian wooden boats that were stern to the dock. This image was taken by Sarah: 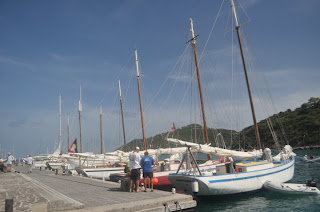 We met up with some fishing friends who we know from tournaments in Antigua and St. Marin.
The year before they had raced with us at this regatta and were eager to join in once again. We mentioned that we needed a bit of equipment for the boat and Christian, the owner of Ocean Must, a powerboat rental place told us to take one of his boats to St. Martin. It was only 12 miles away and we could collect some stuff from the chandlery at Bobbys Marina, have some lunch and be back in no time. And that's what we did quickly jumping on the immaculately kept Contender powerboat with twin 250 hp Yamahas. 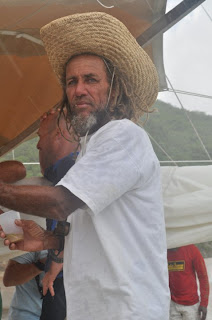 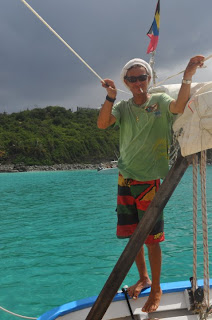 Little did we know that it was Carnival in St. Martin and most things were shut. Needless to say, it was a good lunch there. Somehow we ended up getting roped in to collecting the band and taking them back to St. Barths. Sometimes having a cell phone can get you into trouble. The band had flown in from NYC to play for our Regatta at Le Select on Saturday night, but had come in too late to catch the ferry. We were in the wrong place and the wrong time and took them back to St. Barts. In fact it wasn't bad at all as they had all their gear already in Gustavia. They even paid for fuel!
When we got back we slowly got over to one of the organizers harbour gallery where there was a party organized for us with food and drinks. Everyone was jolly and happy trading stories about these lovely old boats. Even the new ones like ours is generally spoken about as an old boat because of it's design and the way it was built traditionally.
That night wasn't a big one as we were all very tired. Jason went off with the other sailors to a film festival but JD and I were sleeping by 10. We'd be racing in the morning.
At the skippers meeting they said there would be a 10 minute warning gun before the sequence and the starting sequence would be 5 minutes. The person giving the briefing then asked the skippers if they knew what time the start of the race would be. One of the guys said 10:15 and the race director said "that's correct". OK, so off we went. Later as we prepared to start I noticed three boats take off at 10:10 sailing towards the first mark. I called on the radio and was told that the race had started. Great we were already way way behind!
The race didn't involve any beating to speak of with one tack just before the windward mark. We caught up very close to the lead boat Genesis at one point but had problems getting our pole unjammed and lost some of the ground sailing tight up the coast. We finished second that day over the line and went in to complain about the start. Three other skippers said that they had thought the start would be at 10:15 and were surprised at the 10:10 start. Anyway, it was a hot saturday in St. Barths and time for some beers at the beach. I love chilling out at the Brazil bar on shell beach. 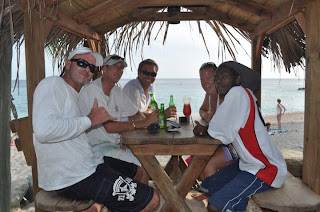 The day turned into night and the band started early at Le Select. The rocked the island!!!
Jason, played dominoes with some of our local fishermen crew while the band played some great tunes. 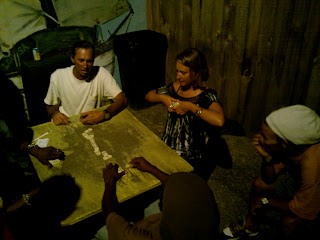 It ended up being a very heavy night with us migrating to Bazz Bar until it closed and then to the Yacht Club disco even later. By the time we woke up for our pastries and coffee we were running a bit late and a bit low.
The winds had dropped and were very light which Ocean Nomad never likes. We started perfectly and already were ahead with a good lead off the start. I had missed the "captains briefing" but our local fishing/sailing crew had the details and were calling the course to me. Up ahead we could see the first mark and gybed it and set the reacher heading to the island where i was told we had to round next. Suddenly we heard some shouts from one of the boats and realized we were sailing in the wrong direction. I guess i should have made it to the skippers meeting! Back on course now we were in second! Once again, this race had no tacking and in the very light conditions sailing from one point to another we never do well. We couldn't gain on Genesis and were eventually passed by the newly refurbed Summer Cloud. In fact, Summer Cloud went on to pass Genesis too winning the race across the line. 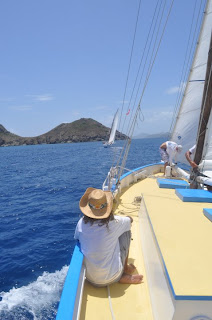 It was now time for lunch at Colombier beach. The boats all rafted up alongside and we quickly put up our awning for the shade. 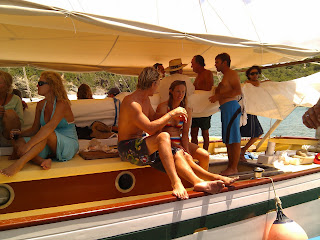 Unlike the rest of the boats, we had a grill and fresh fish thanks to our fishermen friends. There is nothing like fresh fish cooked out on the water by professional fishermen. 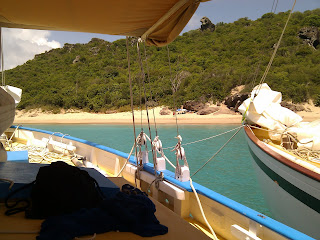 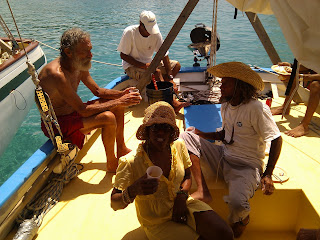 Wow, it was good, but after a while it was time to race in our third and final one for the regatta. The start was a bit too close behind the anchored yachts and almost the entire fleet was over early on the start by about 20 seconds. I hovered back, but figured they wouldn't do a general recall and finally moved to also start early albeit at the back of the fleet but alongside Genesis. It was so light and slow that we could call out to each other with a bit of teasing. We managed to get our down wind sail up quickly and easily covered and passed Genesis. By the time we got to the downwind mark, an island, we were in second again behind Summer Cloud. Once again there was no beating in this race and it was a tight close haul to the finish. Despite Summer cloud being way ahead of the fleet they had to sail down to the finish which was set up at the last minute lower than any of us had expected. Genesis who had footed off and was sailing low and with speed was in the perfect position to go directly to the line and finished first over it.
While we were disappointed with our sailing results this year, we felt that the courses and general organization of the racing could have been a bit better for us. In the end the event was more of an event that a regatta, and organizing a bunch of traditionally built West Indian boats with their owners, crews and friends for a weekend of parties, cook ups and some racing was the main focus. At the awards, Summer Cloud won overall as she clearly was faster on corrected time than the rest of us. Andrew and his company, Woodstock had refurbished the boat after taking it from Gustavia where it had stayed after last years event and she was like a new boat once again. Each boat was made to feel like they were winners and each captain was given a prize of some sort. The prize giving ceremony was unlike many i have been to and we we did all feel very proud of our commitment to these traditionally built boats. There used to be hundreds of them around the West Indies with each island building their own version of the fast sailing work boats. Now there are only a small handful left with only one tiny little island still building them semi regularly. This even was more of a celebration of the Caribbean wooden boat movement and all in all it was a great success. Alexis Andrews pulled it off again and he should be proud of this little special event.
The ride back upwind to Antigua wasn't as much fun for ALL of our crew as the event had been. One of them who shall remain nameless wasn't happy at all. They even kissed the customs dock when we finally got back to Antigua. It was a bit nasty when we left St. Barths with rain squalls and blustery winds: 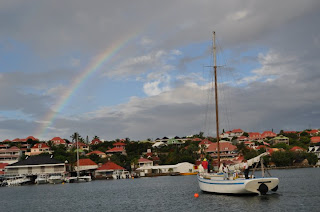 Next year in our effort to keep the spirit of this tradition alive, we will be sailing on the newest of the Carriacou Sloops, ZEMI.
Apart from the photoaction chopper shot, the images were taken by Sarah Gochberg and me.
www.adventureantigua.com
Posted by 365 at 10:11 am

Thanks for the recount Eli ..I felt like I was there with you ! Well done to all the participants . Fab heli shot of the boat ..