hot and sticky at the moment in antigua.

At the moment, I am sitting on my computer trying to catch up on emails and all the other admin kinda stuff that you try to ignore but know you can't.
We had a stretch of bad weather for boating last week. We canceled both our tours on two different days that started out terribly but ended up being nice days. The satellite and radar sites that we often use in conjunction together didn't work in our favor, but from experience i know it's better to be safe than sorry. On another day we looked at the same websites and forecast that it would clear up sending out our boats. Xtreme managed to miss most of the bad weather which seemed not to be as bad on the East and South of the island. That being said, the North and West side where the Eco Tour had been didn't fare the same. They had significant rains for quite a bit of the tour. My captain gave the guests the option of paying for as much as 50% of the tour's price but said that it would be up to them to decide if it was worth that. It was his decision on what call to make. Anyway, the guests, mostly from a cruise ship all decided to pay the 50% which i must say was very kind of them. Cancelling four other boat trips that week wasn't too cool at all, but sometimes the weather can be a bit hard to predict when a tropical wave is passing through. We usually get it right and don't usually have to cancel tours. Of course when we do, we credit 100% of the money back to our customers.
Today there was no need to worry about that and the Eco Tour is out in some very warm but calm conditions. It's dry too unless you are snorkeling which is where most people would want to be today. WOW it's warm. JD and I will be out cleaning the sloop's bottom later today. This isn't usually the best way to spend an afternoon but it's sooo hot that I think neither of us will mind being below the surface.
I have been uploading photos from my phone quite often to my twitter account. Keep an eye out there every now and then for images like this one. 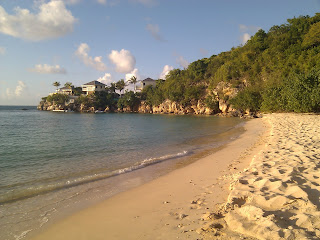 This is one I posted the other day over at Weatherills Beach.
Posted by 365 at 1:15 pm