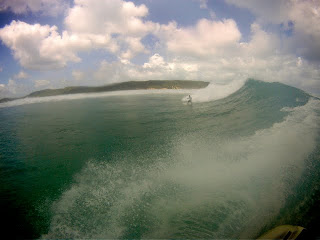 For the past few days the waves have been coming in to Antigua from hundreds of miles away. I imagine the surfers have been calling in sick from their jobs all over the Caribbean. One of my good friends who owns his own company tells people that he's busy all week with "board meetings".
The guy surfing above is world famous kite boarder Andre Phillip. He was pulled into the wave by the Stevie Mendes who took the photo.
Anyway, while we didn't receive any real winds or rain from the dangerous hurricane Igor, the waves have probably caused some damage to the marine eco systems as well as some beaches.
Last night I passed by Dickenson Bay where the Sandals and several other hotels sit, and the waves were coming right up and over the beach. Although they didn't seem that big, they were causing problems along the shore because of the high tides and surge.
Today I am cancelling my Xtreme tour sadly because of these swells. The tour could probably go out, but snorkeling would be horrible as would our beach stops. This doesn't happen very often at all during hurricane season, but I think today it's the right decision.
Some people are enjoying it though. This is a photo of my good friend Nik on his SUP (stand up paddle) board "ripping". The photo was taken by the equally talented Shelly Chadburn.

I have been laying low for the past few days and missing the waves. The forecasts have the waves sticking around for another few days, so i am sure I will get some of my own. All the forecasts show lovely marine weather again from Monday.
Posted by 365 at 6:44 am

THANK YOU ..Eli..
When a storm passes our little Island are we thankful.

When it bring us waves like this OH JOY!

I hope the conditions serve as inspiration for another awesome HD surf video from the guys...

Glad you guys are safe!

Now go get those surf boards out and catch those waves!