In fact, before it was even strong enough to be called a hurricane, Tropical Storm Tomas was forecast to pass right between Tobago and Barbados. My mother in law, runs the Kariwak Hotel in Tobago and said everywhere had shut early on Friday expecting the arrival of Tomas. As it happened the storm jumped a bit North and spanked Barbados with up to 70 mph some are saying. While the island hasn't reported any deaths, it did get quite a bit of damage. Here you can see a radar image showing the north side of the eye of the storm passing over Barbados: 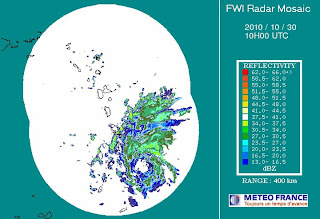 After that it strengthened and moved towards St. Vincent and St. Lucia. The northern bands of this storm were big enough that over 300 miles to the north here in Antigua we experienced periods of heavy rain and winds. All week long I had been planning that on Saturday i would be bringing down one of my boats that was sitting on a mooring in Falmouth. When i woke very early yesterday and say the image above I knew I had to expect some bad weather. We moved a little more quickly and by the time we set the head sail, the waves were already breaking across Bishop's Reef. Outside there were some good swells probably up to 14 feet and one even broke into our little tender. Here you see Trevor on the tiller in some of those swells: 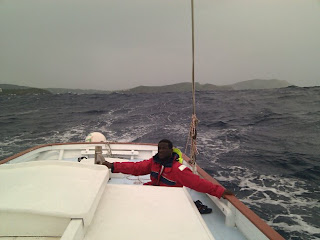 It wasn't long before we were surfing into the calm waters behind Cades Reef and then on to Jolly Harbour where we dropped a hook.
During the night the squalls came in heavy and I was worried about the boat. This am she looked good which was a relief. Of course there are many yachts, houses and people in the Windward Islands who were not nearly as lucky. There has been very little news coming out of St. Vincent and St. Lucia but some deaths have been reported in Vincy. Check www.stormcarib.com for more local reports to come.
Lets hope that was the last storm of the season for us. Sadly, Tomas is not finished yet and the real damage my still be to come for Jamaica or Hispaniola.