Crazy Customs Fines will have a negative effect on the yachting sector. 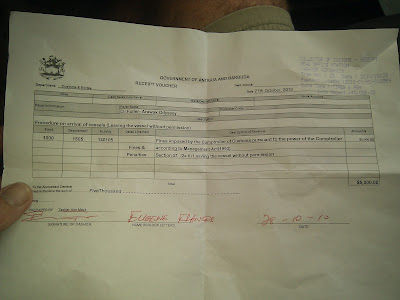 This is so sad ..pathetic. It will certainly be to the detriment of our Yachting sector , unless something is done to balance this regulation out ASAP . How many more will fork out $ 5000 , because they cannot afford to loose the time it takes dealing with our so called " officials" ! What a Sham ...

Like we say around here my friend. "Common Sense, Isn't Common." Very sad indeed. A lot of Antiguans take tourist/tourism for granted. But when tourist start seeking other alternatives for their travels and the powers that be being to starve they will wake up. Then again TIA (this is Antigua) who I'm I kidding things wont change. Hang tough my friend.....WadadliChild

Ludicrous and downright dumb. What a painful experience Eli.
On ship's stores: It will be very easy for Antigua boats requiring work to be done to go to St. Maarten or elsewhere. The savings on paints and materials will pay for the job to be dome there depriving our yard workers of jobs.

As usual it's the attitude that has to change! In remote ports elsewhere, from my sailing experience, there are customs phones to call the duty guy to at least tell them you've arrived. This common law has always caused some anxiety I remember many times having to wait for an hour or so for the Customs guy to come back, but invariably we used to go ashore to use the loo/showers after a hard wet crossing. They would always apologise for keeping you waiting and never in 25 years have we been fined!

These uneducated people with a little bit of power like to abuse it for their amusement. If it was some poor local they wouldn't even consider anything of it.Unfortunately they know who u are.Sadly the small island life is disappearing with the emergence of idiocity.
Also it is quit likely that things like this create the perfect environment for bribery....hmmmmm


And for the previous example of the tourist lady...$that 5,000 profit probably cost them 100k in marketing.