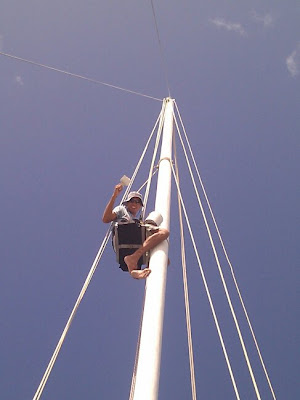 Well after getting our boat Zemi ready to race the day before the regatta started, we didn't have much time to do much training. We had spent a month on the dock sanding and painting, making a new rudder, making new spreaders and modifying the mast. We also had to melt up lead and add internal ballast. 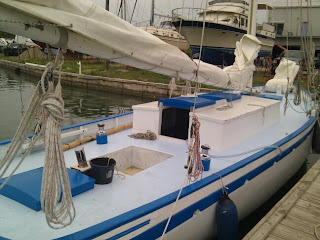 We put new winches on the boat as well as a bunch of lines and blocks. Our crew was one of the best i have sailed with though and we got out on the course every day before any of the other yachts had left the dock. 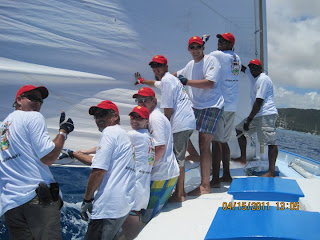 Here you see us wearing some t-shirts which were a gift from a lovely clothing shop in St. Johns called  Rasta Pasta. The hats and later the red shirts were a gift from Mount Gay rum. Thanks guys! 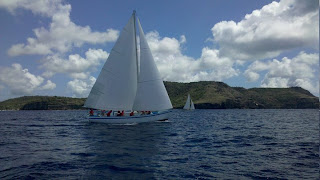 Leaving the dock early each day helped us fine tune the equipment and get a feel for the boat in the light air. The winds were unusually light and shifty which helped us as we were don't have enough internal lead ballast and the wooden boat is still fairly "dry". It will take a while before the wood has soaked up all the water it can. Anyway, before the first race we made a big mistake before the start by getting ourselves nearly into a penalty position between the start boat and the shore just before the start. 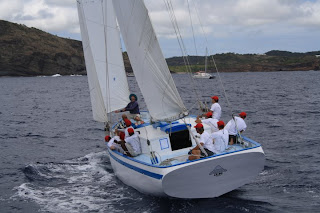 To avoid this we had to sail to the opposite end of the start line which caused us to start slightly later than the rest of the class. 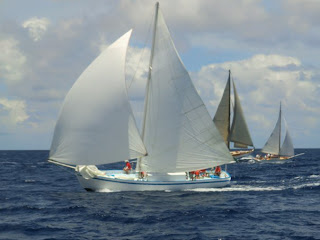 There were seven Carriacou Sloops in our class with New Moon being the newest one straight up from Carriacou. Our boat was the largest but with a solid wooden mast and boom, we didn't have the worst penalty "rating". The worst rating went to Summer Cloud who with aluminum mast and boom and a bunch of other race modifications which made her quite unique in the class. Anyway, as expected, Summer Cloud raced ahead with Genesis behind. It took us a while to slowly pass other boats and move into second. In the end we finished over the line in second and after the penalty had been calculated (also known as corrected time) we ended up in second by just ten seconds. This race had taken over three hours and to be beaten by just ten seconds was a wake up call to all of Zemi's crew that the regatta could easily be ours. We enjoyed a swim before getting to the dock. That's the beauty about sailing in the Caribbean. Imagine trying to do that at the famous Cows Regatta! 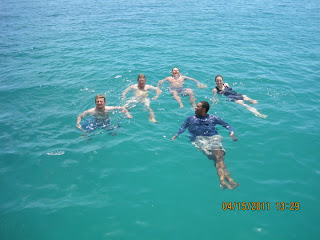 There were three more races scheduled and we finished first on corrected time in the next two putting us in the lead. 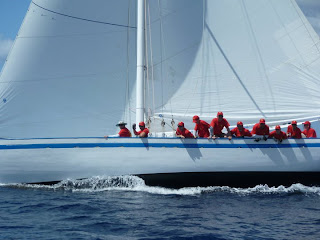 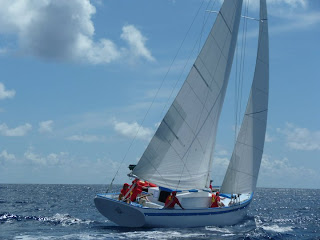 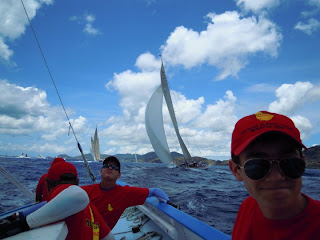 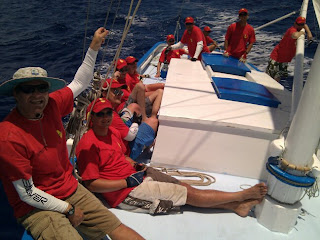 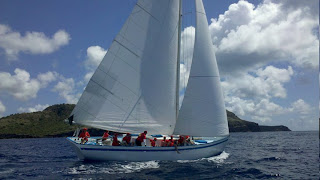 We needed to make sure we won the last one and from the start we lead the race and the fleet until we got to the down wind mark where a massive "hole" enveloped us all. There was no wind at all and we drifted around until a gust of about one mile per hour appeared. Summer Cloud got it first and managed to slowly move around the mark while we watched our lead vanish. If she won this race the overall result would be a draw. It was a long race and they would need to beat us by about 8 minutes. When we got to the windward make we were three minutes behind them and possibly gaining in the fresh breeze. Way down behind us the majority of the fleet now sat motionless in the big hole we had sailed through. On the way to the last mark we heard the race committee over the radio say that sadly they were abandoning the race due to the lack of wind on the course. Our crew cheered knowing that there wouldn't need to have a result of the last race to make us winners. 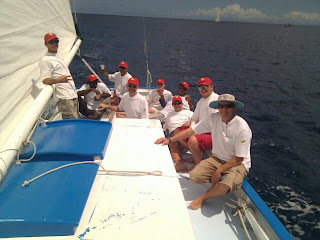 Summer Cloud who said they heard our cheer wasn't happy at all. Of course, we will never know how far they would have finished ahead of us, but everyone on our boat knew that we would have beat them on corrected time. I know our competition all thought the opposite, but that's racing and it wasn't the first time i have seen a deciding race abandoned. So as you can imagine we were all very proud of our boat and crew. Zemi is a fast boat and may get faster when we have more ballast on board. We are looking for lead and have so far collected four hundred pounds of used wheel alignment lead. 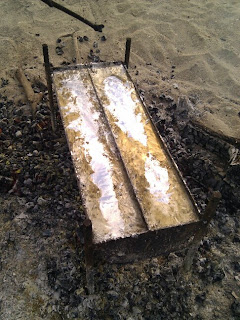 Before the regatta we melted up the same. There is a big regatta this weekend in St. Barth (St. Barts), but sadly we won't be able to make it. Our other boat will be racing in the regatta without us and hopefully will do well in this one.

Photos were taken by many of our crew as well as by some of the Adventure Antigua crew who came out to watch us one day. A special thanks to our crew seen here collecting our prizes. 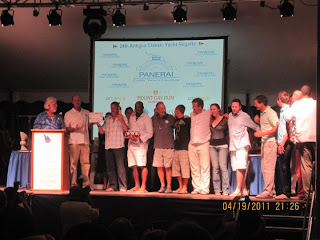 Zemi was helped to her win by: Eli, Serge, Guilli, Nikolai, Kat, Hugo, Olly, Justin, Josh, Tom, Alan, Peter, Big John. As you can see we had plenty and they were all needed and appreciated! We also had some help getting in and out of the port from some firendly cruising yacht crew as our engine isn't here yet.

Congratulations to Captain Eli Fuller and the entire Zemi crew for the excellent result in the Antigua Classic Yacht Regatta. I am confident that this will be the first of many successful campaigns in the years to come.

Nice blog! I think I had repressed the memory of that massive hole we hit the last day.

Thanks for this very useful info you have provided us. I will bookmark this for future reference and refer it to my friends. More power to your blog.