The racing starts on Friday but today and tomorrow are registration days. In fact, tonight is the official crew party at the Antigua Yacht Club.
A few of the Adventure Antigua crew and I have been putting in 12 hour days for weeks trying to get Zemi ready for this regatta. In what seems like dejavu from 2008 when we were slapping paint on the sides of Ocean Nomad hours before the first race, it's been a mad rush to get Zemi finished. This photo was taken yesterday when we rigged her with all the modifications and the new paint job. 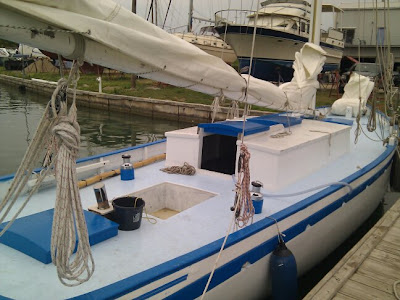 The cabin roof will eventually be the same colour and the deck. There is still plenty of painting to be done but she's ready to sail, race and hopefully do well in the regatta. There's a crew party put on by Mount Gay later today at the Antigua Yacht Club so if we make it there, we will have a few very deserved drinks! This has been over two months of solid work. I wish we would have had another two weeks to sail her and figure her out, but at the end of the day we will be very happy to have made it to the regatta. This little video was taken back in 2009 when we actually won our class while racing on Zemi's sister, Ocean Nomad. She is taking time off from our day tours and charters and will also be racing in this years regatta.