a bit of kayak fishing 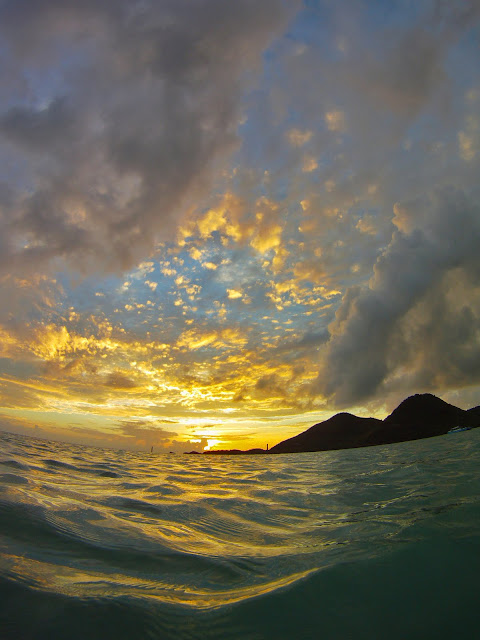 After the Eco Tour returned back to Jolly Harbour, I decided to do a little fly fishing from my kayak. I took my nine weight rod and a good tarpon fly and paddled slowly out of the harbour. It had been a fairly cloudy day without any rain despite some of the weather forecasts which as usual were wrong. Anyway, I saw some fish splashing but they turned out to all be mullet. I paddled out of the harbour and across the bay towards the little inlet and swamp near Hermitage Hotel. I had one strike from what looked like a decent snapper and apart from that the only action I had was a few bites from a common laughing gull that kept following me.
At least the sunset as seen above from the kayak was nice. Just after I took this photo I had a good bite as I was just about to enter the harbour again. This time it was a little tarpon and I got it to the kayak in short time. When releasing fish you want to try to touch them as little as possible as taking the mucus off their scales can cause them harm. When I fly fish with my uncle we use something called a booger grip which helps you get the hook out without you having to touch the fish. I didn't have one but as I got the fish alongside the kayak, it spat the hook and swam off. A good ending to the day for both of us.......

This photo is breathtaking