A government not representing the people because of Japanese influence. 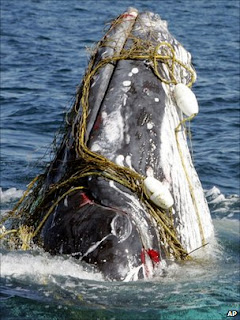 This blog post has many links to other blog posts i have written on the topic as well as some info from other media posts including a recent one from the BBC. Click on them for more info.

Recently the International Whaling Convention talks were shut down by Antigua and Barbuda together with other members of the pro whaling group. Antigua and Barbuda's government supports Japan in a quid pro quo arrangement where Japan spends money on certain apsects of our fishery. The grant money is very specific and all goes towards building fish processing plants and small marinas which to this day have never been used as they were designed or planned. Many of the fish storage buildings are rented to regular people to do things as obscure as storage of household items to selling beauty supplies. Not a penny of this Japanese blood money (as i call it in a blog from last year) goes towards fishery management in an effort to make our fishery sustainable. Read more about that here in this recent blog and also by clicking here for another similar blog post.
Most Antiguans polled on the whaling issue by the NGO, ABITPC, said that they were against whaling and our Government's support of Japan. In fact 2386 people polled at places like the Woods Mall in Antigua were against any form of commercial whaling. Many who support Japanese whaling seem to think that it isn't possible to poll Antiguans in a fair way. Anyway, ABITPC's poll from nearly 10 years ago wasn't the only poll. A World Wildlife Fund poll of people in several countries also found the same thing: the average man and women in Antigua is against whaling. Read more here.


Should Your Country Support Whaling? 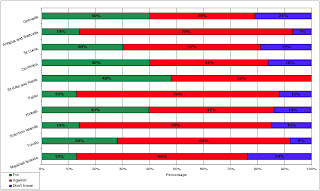 Knowing that most Antiguans and Barbudans are against whaling and our government's support for whaling, Japan decided to change the propaganda machine's tactics. The message is now: "Don't let those white countries who took advantage of you for so long tell you what to do with your fishery!" Of course our government and those of many other receivers of Japanese blood money have fallen for this message Hook Line and Sinker. They are towing the line with renewed inspiration and saying that nobody should tell them what to do. Their stance is that they believe in the rights of nations to have SUSTAINABLE USE OF THEIR MARINE RESOURCES. As mentioned in a link above and again by clicking here, this notion of sustainable use would be ok if we actually practiced it here. There is no evidence of it at all here where fish stocks are dwindling and fishermen are going deeper and further into the sea to find seafood. I think the new stance is just so crazy on so many fronts. For one as mentioned above our fishery isn't being used in a sustainable way. No money is being spent on fishery management and especially no Japanese money. There isn't any threat to our use of whales as there has never been any history of any use of whales here in Antigua and Barbuda other than in tourism as seen in this video (if you have time) shot in our waters:

Also I don't think it is a case of Antigua and Barbuda being used and abused by former white colonists but more of a case of us being used, abused, and fooled by the neo colonist JAPAN. Chinese and Japanese neo colonialism is subtle to those who have their heads in the sand but what else can it be called. They are controlling what we do and say despite most of the people either not agreeing or not knowing what is going on. When you read articles like this one I think you can understand a bigger picture of what's going on. Cick here to read about how far Japan will go with evidence of bribes, hookers and more. Of course nobody was locked up because it would mean that governments would have to investigate themselves. This kinda thing doesn't happen in countries like ours.
Anyway, while our fishery and reefs decline to the tipping point, our government seems more concerned with Japan's fishery and their rights to hunt and kill whales for "scientific research". The walk out at the IWC hurts whales and dolphins that are not even being hunted by Japan. A proposal was brought by some Latin American (not white former colonists) to set up a whale sanctuary in the South Atlantic. This isn't an area where Japan, Norway, or Iceland hunt whales and neither does St. Vincent and the Grenadines either!!! So none of the pro whaling nations hunt there but on Japan's lead they all walked out of the meeting before a vote could be taken. This made for a collapse of the talks further damaging the IWC. Read more about why whales that are not even being targeted by the Japanese in Oceans not even being used for their whaling are let down by the Antigua and co. walkout by clicking here.

I took a photo of these whales were enjoying our waters off Hawksbill Hotel. In the meantime reef fish and others continue to vanish off Antigua and Barbuda and people continue to eat imported fish such as "butterfish" and "banga mary". Don't forget that most Antiguan's are against whaling for now. One of my crew who lives in what he describes as "the ghetto" started telling me one day that he watches Whale Wars, which is a program about the only real anti whaling fighters out there. This crazy group drives the Japanese whaling fleet just as crazy with outlandish tactics. Anyway, this rasta crew of mine wanted me to help him get a job on the Whale War boat. I am sure there are many more such people here in Antigua, but our government ignores them.
Posted by 365 at 1:01 pm