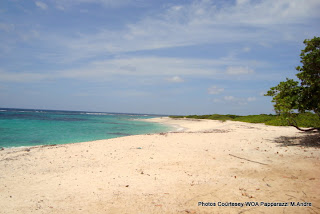 I don't ususally take other Antiguan writer's work and post it, but this time the author gives full permission in her first line. I am "macoing" her very good facebook note.

Yes it's been quite a while since I wrote a note but if you've read any of my notes before you know that when I do put one down, there is a reason, and the madness has method and rhyme.

Considering the nature of what I'm about to address, I know that not everyone may agree and thats fine, but to be brief, and "crispy" as someone called me today...let me put this as a disclaimer: This is Marcella Andre's facebook page. Its not my job hence I subscribe to my own code of conduct, I'm not looking for friends or enemies for that matter, neither favours nor accolades. I'm just sharing my thoughts. If you don't like what you will find in this "note" take it to the Lord in Prayer...or in simpler terms Bite Me! If you have a dissenting view, please dissent with respect for me and others. Whew!! that was a load off my chest.

I have a feeling that some of you who posted comments to my preview think that I am about to talk about Sargasso Weed and its myriad effects...but no, sorry, thats not it. I think I'll leave that to Eli Fuller and marine biologists thankyou. The title of this post should give you an indication that I'm referring to our tourism product. Yes...the Beach is just the Beginning they say....And then what???

For the last five weeks, I have been "tour repping" every weekend. For those of you who don't quite get the concept let me explain. A particular tour company in company requested my services for this 5 week duration because they recently struk a deal with a number of travel agencies in the French Caribbean. To ensure excellent service, they needed a french speaker to assist them with the guests experience while here. Each weekend there was a total of about 100 visitors from Martinique staying for a week, and placed at Veranda, St. James, Jolly Beach, Galley Bay and Halcyon. (BTW, Thanks for the reccomendation to the person who suggested me) (Side note: parents, please implore your children to learn another language or two, you'd be amazed at the opportunities that just this skill creates...Thanks to my momma I can proudly say I speak two and a half languages in addition to my mother tongue)

Anyhoo...back to the topic at hand. As a tour rep, basically you are expected to meet the guests at the airport when they come in, visit them at the hotel specifically for the purpose of "selling tours", and also be available to them should there be anything they need to resolve with the hotel, any queries they may have on anything at all...basically they own the right to your attention for the week while here.

The experience has been fantastic. You know I'm a "people person" so that aspect of it has been great, and just the opportunity to use my french is always welcomed. The experience was also a learning experience and it is one that led to the question that I am trying to get an answer to...after the beach what?

You see, in my "tour repping" orientation, I was handed a list of what we offer to our visitors. It reads something like this...Shirley's Heights,Historical Tours... Catamaran Tours (x 2 different companies x 3 excursion possibilities-bird Island, Cades Reef, Circumnavigation, all going to the same places) , Barbuda Tour, Stingray City, Helicopter Tours, (hella expensive!!) Island Safari (where you see among other things "fig tree drive"), Zip Line, Deep Sea Fishing, Horseback Riding (wow!)...you get the drift? There are quite a lot more but they are along the same lines. I worked with four pages of possibilities but there were many more....along the same lines, just different operators. One of the things a tour rep needs to know is the type of tourist that they are dealing with. Once you have figured that out, then it helps you decide what tours you are going to pitch. By the end of week one I had decided to stick to Catamaran, Town, Island Tour, Stingray. Those are the ones that were most likely to sell. Additionally a tour had to be created specifically for them that included a french speaking person who could explain to them what they were seeing.

In one of the groups there were three girls who did practically everything they were offered. They spent a total of at least U.S. $700.00 individually on just excursions. Let's not forget they were also paying for a week at Veranda, did some shopping and dining outside of the hotel. Because they were such good sports, and because they were some pretty cool chicks, I offered to take them to a restauraunt that they had heard about and wanted to go to - Warri Pier. So there we are, sitting at dinner, four of us,they are telling me that they had a great time, showing me pictures of all their "adventures" - oh wow....picture from the helicopter- beautiful beaches...next set of pictures, at the beach from one of the catamaran tours , next barbuda's beach - excellent, next set - in the water at stingray city....a few at Shirley's heights etc.....so as we conversed that evening I asked them about their impressions of Antigua and though I was a little hurt for Antigua and its offerings I also was not surprised at what they said.

They expounded in great detail on the fact that though they had a great time (because they planned to no matter what), yet they still have not been able to identify Antigua's "culture" or what Antigua represents, or what thing, way of being is Antiguan. Big surprise. (NOT!) I listened as they told me that the people at the dockyard need some customer service training (forget what I said above,...I'm available to facilitate!:-) because the person said to someone else within earshot of the visitors "I only speak one thing - E N G L I S H" and then practically dragged through the Dockyard tour as if they were harrassing her. I know you've heard this one before but they also visited a couple places in Heritage Quay and they felt as if they had been judged already because they did not appear to be americans with lots of U.S. dollars to spend or even British people with the power of the pound behind them..so they were ignored. Undaunted, the ladies still shopped because of course what the clerks would not have known is that the spending power of the Euro was on their side. Note well, that despite the great time they had, those unpleasant experiences were still recalled as a part of their overall "experience". Oh and one last gem... they found that we sure do play a lot of reggae and dancehall here. No joke. I'm just telling you what they told me - their perceptions.

So think about it. What really do we have to offer to the caribbean tourist? How does a caribbean visitor discover the heart and soul of Antigua while in Antigua? In my attempts to encourage the purchase of excursions I was actually met with responses like " we have water around us too...thats not really interesting to us" "we want to discover things Antiguan" and really, they are correct. No brainer. If I live on an island (as I do) I really don't want to spend my money in someone elses island visiting beaches and circumnavigating because I can do that at home. If I'm going to the beach on another island, getting there will not cost me US 120.00. I want to discover and understand the people, their culture, what is unique to them.

This year I visited Guadeloupe three times. Each time I discovered something interesting and different that showed me who they are, what is important to them, what their values are (none of them were on a beach).

The Reality as I see it

The truth is that here, we are a melting pot. (Matter of fact, I think they should just go back to that idea "melting pot of the caribbean"). We have assimilated everyone else's culture in a plethora of ways. If that's what it is, work some aspect of that, if that is not the way we would like to be perceived, then we have to actually find some way to promote the remaining "things Antiguan" that we still hold some pride for.

Why for example can we not have a mini excursion that takes people through the process of making Cavalier Rum..with a culinary experience involving the use of cavalier at the end of the trip. How about the pineapple farm tour and again the same experience at the end...? How about actually creating an event that gives visitors an experience and education of our "culture" and history even including the melting pot reality and leaves them feeling like they learned something and had a great time doing it? Add some food and drink to that too...

I do not claim to have all the ideas but seriously...up to now we don't know who we are? We can't decide, plan, get creative with how we present ourselves? Cha man! :-) Our toursim product needs to wheel and come again...and not just for the caribbean tourists either. The beach for North American and European visitors is no longer a novelty...its stale.

When speaking to my students about presenting themselves through a resume and cover letter, I remind them that if you choose to used played out shit (well not in those words..) like "i'm dedicated and willing to perform for the best of the company" that they have just cast themselves on top of the pile of others because they have presented no unique selling point about themselves. They've got to look for that unique selling point or points and sell away!

And by the way...let me not even start on this thing we call "culture". As far as I'm concerned, they can just close the department of culture and put out tenders for people with real creativity, talent, organisation and ideas to run it.

A wonderful post. It echos my sentiments about doing tours. Some people only want the beach and a few "sites." Many of us want more, but it is difficult to access unique excursions. I love the suggestions in this post. Culture is food, work, spirituality, etc. Finding an interesting, appealing way to market this to us visitors would be valuable.