Opening a coconut with your bare hands.

This blog was fun to write. I originally posted in March 9th 2007 and think it's a good one to repost. Feel free to share this one around as some people may find it useful. Since i was a kid i have been intrigued with coconut trees and coconuts in general. My earliest memories are of "tyrone" coming to my grandparents’ hotel in an old dilapidated pickup with a bunch of young scruffy guys to "clean the trees". My grandfather's property had loads and loads of coconut trees on it and the danger of a coconut falling and causing injury was always a problem. Instead of paying someone to come and cut down old branches and take down ripe nuts, he would call tyrone. Tyrone's business wasn't cleaning trees at all, but was really selling coconuts and coconut water. When my cousins and i were little there were two important occasions when we would all gather around. The most important was when the lobster man came....we would wait around while 20 or 30 lobster were boiled in a big pot so that we could get the legs that dropped off. Yum yum....we could never get enough freshly boiled lobster legs. I still think they are the best thing on a lobster. Of course the other time was when tyrone and his men came to clean the trees. Those guys seemed to just walk up the 40 foot tall coconut tree like it was on level ground. In those days they just had a rope and a machete and they would climb up and pull themselves into the branches. Once up there they would tie one end of the rope onto a bunch of coconuts, cut the stalk and then lower it down to be untied by someone below. Usually trees would have several bunches. Once all the nuts were collected and taken back to the truck it was our turn to feast. Tyrone could open a "jelly" in about 3 seconds, chopping away the bottom of the nut in a blur. Now it was nearly impossible for a kid under 10 to drink all the water out of a jelly nut, but we would try every time. Once you gave up or miraculously finished it, you would hand it back to him. Tyrone would then cut a "spoon" from the side of the nut and then chop it in half. These guys never wore gloves or shoes, we would marvel at how skillful they were. Now i guess i should clarify what a "jelly" is before i go on. A jelly is a green or young coconut that hardly has any "meat" inside of it. The meat is very thin and delicious with a soft consistency kinda like jellow or jelly. None of us would ever dream of eating hard coconut.....yuk.

Anyway, when i was about 6 years old my parents split up and my mom took us off to England. One of the things i remember is seeing old hard coconuts without the "husk" on them in the markets there. Mom got one once so that we wouldn't forget what they were like, but the meat inside the old coconut was about half of an inch thick and dry as hell. That was good for cooking with bit not fit for eating just like that. Man i missed those green jelly nuts. Anyway, my mom realized this a few years later and we move back home thank god.


Anyway, since then i have always chuckled under by breath whenever i have seen tourists try to open coconuts. One great one is when they find an ancient brown coconut that has been on the ground for months and think that they are going to find something delicious inside. The pain and suffering that unfolds next while this unfortunate soul frustratingly tries in vain to open the thing is comical in an evil kinda way. I am sorry but it’s true. Another good one is when a proud dad tries to do some father son bonding when he finds a big fully mature coconut on the beach. He nods to his son as if to say "look what your dad is gonna do son...you are gonna love this". After 15 minutes of bruised fingers, sweat carrying sunscreen into his eyes, and a few curse words thrown in for good measure..the dad finally says, "son this one isn’t any good".


Now that is even sadder than the first one so the purpose of this blog is to help all the dads out there make their son's proud. If you come across a coconut in the future you will be able to open it with your bare hands after reading the rest of this. I am even gonna throw in pics too.


As a single guy, who doesn't have kids i still happen to know what it feels like to open a coconut for loved ones as you will see below. I am going to use my "kids", Sparky and Lila in this guide. They both worship coconuts and have done since they were little pups. This pic is of them bringing their dad the nut they have found: You don't want to have a coconut that is too dark. The darker and older looking it is, the more hard the coconut meat is going to be, and if it’s too dark or even brown the nut can be sour. Green ones have the jelly and with a little yellow or even orange in it they are gonna have some good meat inside the nut. Once you have the nut you want to find a rock, a pavement or a bit of concrete. Just so you know, it will stain the ground so don't get the hotel upset if you are using their nice walkway. haha

Ok, hold it firmly in your hand with the top of the nut facing up. The top is the side that was once attached to the tree. This first photo is of the bottom and it’s the side that will be facing down, and is also the side you will be hitting directly onto the rock or walkway. Hold it tight and hit that end down hard being careful to hit it "plum" right on the bottom, and don't let it go. After one good hit you may see vertical cracks appear, but you must keep hitting it a few more times sometimes. Anyway, the worst thing to do is to try to pull off a section before they are all ready to come off. You see, the nut will almost always split into thirds and you want to keep them together until all are ready to separate. Sometimes they don't all come free at the same time, so keep hitting it on the bottom and eventually it will open up like this (this is the top and not the end you are hitting against the rock): From here you should be able to start pulling of the outer skin. You will be left with a very furry looking thing like this: 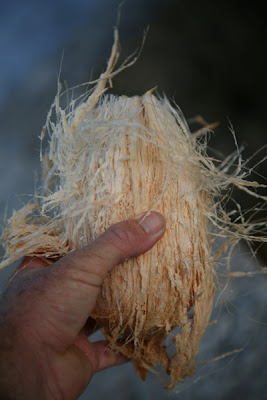 Throughout the opening process you must always remember which side is top and which side is bottom. Now you have to hit the opposite side or the top side in order to free up the thickest part of the fuzzy "husk". After a few decent hits you should be able to just peel it all away like this: 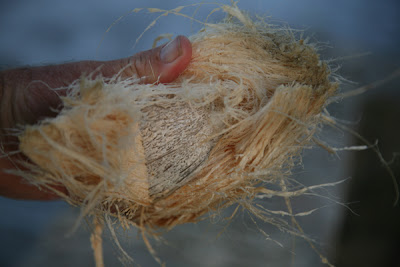 Keep peeling and you will end up with a nut that is clean and ready to be opened. At this point your onlookers with be intently looking on with anticipation and watering mouths (like this:) 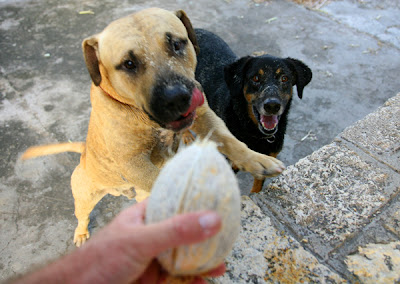 Without tools this is tricky if you want to drink the coconut water. You now have to tap around the bottom of the nut moving it each time you tap it so as to try to create cracks around the edges. You should end up with something like this or better: 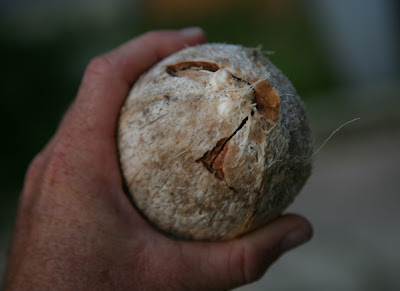 If you are lucky you will be able to take some of the shell out and drink the water. This takes some skill and luck. If it doesn't go well and the water leaks all over the place all you need to do is hit the nut a few more times and start sharing the bounty. I can open a coconut this way in about 3 minutes in a rush. It can be a bit more difficult taking the older and harder coconut meat off the shell once its open, but you can just let them gnaw at is which is what lila loves to do anyway. Hope you had a laugh and will use this guide some day. If you have any questions please use the comment section and i or some other coconute expert will answer.

Eli, great read but you need to update the story in that you're no longer single and without kids. Congrats man. Teddy

Thanks for sharing this information. Really awesome scenery how dog is keeping coconut in its mouth and sailing in water.