18 million US dollars of Government Dept in exchange for what coastal protection??

This photo below shows some of the legally designated Marine Protected Areas (MPAs) that Antigua and Barbuda currently has. Some of them were set up in the early 70s and up to now I don't know of any area within these huge expanses of "prtotected" waters that is being actively managed in any way. We see so many types of invasive non sustainable fishing methods daily within these MPAs and whenever our politicians speak of environmental protection I just laugh. Recently tears came to my eyes when I heard that our government was boasting about wiping off 18 million dollars of debt in some sort of environmental trade with Brazil. The Minister responsible says that Brazil is forgiving the debt because he and his government have promised to protect the marine coastline. There are more questions than answers with this one to be honest. 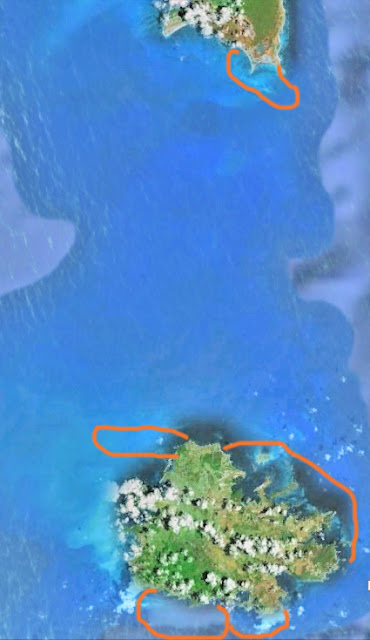 Here is a excerpt taken from The Antigua Observer:

Baptiste told the CARDI consultation that he was able to further reduce the debt to $18 million after talks in Rio in June with that country’s finance minister, Guido Mantega.
“We were introduced to a climate change organisation (The Nature Conservancy) and we are getting involved in a debt for climate adaptation swap,” Minister Baptiste said.
“We will get the climate change people to pay off the $18 million for us while we get vigorously involved in coastal zone management in Antigua & Barbuda.”

Read more here. As you can see, it's not very specific to be honest. Caribarena.com wrote another piece today questioning what exactly this all meant:

According to Wendy Tittle, Press Secretary for Minister Baptiste, too many details cannot be divulged about the proposed initiative at this time, as the ministry is “still waiting on some documents.”

My problem with all of this talk is that as the photo above shows, we already have huge areas of coastline in our country which is protected under law and on paper but not actually in practice. I hope that the Brazilian tax payers and The Nature Conservancy are not as complacent as we are here in Antigua and Barbuda. I hope they actually are going to make sure that some sort of visible marine protection goes on here. We don't have any marine patrols at all here in Antigua for all of the area that sits in Marine Protected Areas and without the 2006 Fisheries Act having any signed regulations, the "fishing free for all" continues. The marine environment is under more strain than it has ever been under and while our government ministers slap themselves on the back our our marine resources dwindle and become extinct. Protect the Marine Protected Areas and stop talking!!!!!!!!!!
Posted by 365 at 12:38 pm

Completely agree that I hope there is some sort of protection that will be going on.