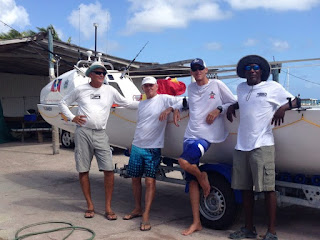 When #teamwadadli comes in to Antigua there will be many records set, but the achievement is more that just record breaking. The precedent being set is something so unique for this region that all Caribbean people should be proud. The great adventurers and explorers we have read about and seen on the TV almost always come from far off places, "worlds" away from our cricket fields and paln fringed shorelines. These adventures are the thing of dreams and stories for many of us here in the Caribbean. Until now! This astonishing adventure often described as a crazy endeavor could inspire a new generation of home grown explorers and adventurers who now know that the stuff that was once merely dreams is achievable by us little people here on these little islands.

When Doc Nick Fuller decided to take the plunge I don't think he had any idea what kind of splash he would end up creating here in Antigua and Barbuda. I don't think that while rowing just 300 miles east of us that he even knows now what an incredible following the team has or the emotion that is on the verge of overflowing when they get here. When something is posted on the Team Wadadli Facebook page in the morning, it usually has hundreds of "likes" and comments by the end of the day having been seen by thousands. The island is buzzing with excitement and people from all walks of life are taling about Team Wadadli.

When he started his team's website, even before he had found anyone to join him he wrote the following:

As these rowers approached Antigua from the East, We have often powered up to meet them in our sport-fishing boat some 30 miles above Antigua, watching in awe as these sunburnt and weary seafarers slowly row their way to English Harbour to complete their transatlantic 2,800 mile journey from the starting point in the Canary Islands, just sixty miles off the coast of Africa. It has often been said that more people have been into space or to the top of Mount Everest than have rowed across the Atlantic."

He went on to say that it was proving to be difficult to find anyone willing to join him:


"Unfortunately so far the ones that I’ve asked to come with me have given me a peculiar look and then walked away laughing."

Let's face it, this is a Herculean task and maybe they were all crazy to sign up.....even the Doc! That being said, all of history's explorers were once described as crazy, and thank goodness they were not dissuaded. A quote that is often wrongly credited to Steve Jobbs but was actually spoken by Rob Siltanen reminds us that the crazy ones sometimes change the world.

“Here's to the crazy ones. The misfits. The rebels. The troublemakers. The round pegs in the square holes. The ones who see things differently. They're not fond of rules. And they have no respect for the status quo. You can quote them, disagree with them, glorify or vilify them. About the only thing you can't do is ignore them. Because they change things. They push the human race forward. And while some may see them as the crazy ones, we see genius. Because the people who are crazy enough to think they can change the world, are the ones who do.”

Team Wadadli gets its name from the Amerindian name for Antigua. These early indigenous adventurers and explorers who traveled from island to island in small wooden dugouts, explored and inhabited them long before the European's dreamed of sailing here. They rarely are talked about these days. Team Wadadli not only reminds us that the earliest Antiguans and Barbudans were explorers going from island to island in tiny boats at one with nature, but fills us with pride in knowing that we can still be explorers and adventurers. Wa'Omoni is the name of our team's boat, and that name is the original indigenous name for Barbuda, our sister island. 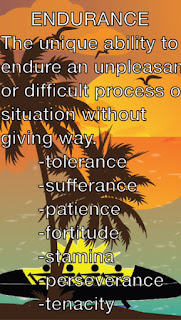 This adventure is truly akin to Edund Hillary's first summit of Mount Everest in 1953. I can't help but feel that it is like America's Neil Armstrong fist stepping on the moon in 1969, or Russia's Yuri Gagarin's first orbit in space years earlier in 1961. It's like Dame Naomi Christine James being the first woman to sail solo around the world, or  any other of the great adventurers' or explorers' accomplishments. For a little island in the Caribbean, this is a huge big deal and one that people here are excited about. All of these people returned home to huge fanfare and celebrations, and I think Team Wadadli not only deserves the same but will undoubtedly receive it.

Nick Fuller, JD Hall, Archie Bailey and Peter Smith will go down in our history as great explorers and adventurers and there can be no doubt that they will inspire others to follow. I have already seen comments from other nearby islanders who have no expressed interest in being just as "crazy" as our team. The little kids I spoke to in the preschool that JD attended when he was a kid didn't think Team Wadadli was crazy, but they were all filled with wonder and amazement which is what so many kids these days are missing.

It looks like our team will either arrive sometime between Wednesday afternoon and Thursday morning into Nelson's Dockyard. Be there! It's going to be special.
Posted by 365 at 12:54 pm