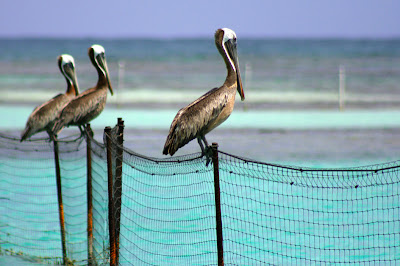 On the Antigua message board i saw someone posted a thread letting me know about a new article they had read on Antigua which had a good plug for my tours. I will try to get a copy of that to put up here, but another one that came out this month was in Englands The Sunday Times Travel magazine. It was written by Nick Redman. This wasn't the final version and he may have edited it a bit. I can't find the final version online and didn't get it emailed to me. The photos are excellent too if you manage to get a copy i am sure you will enjoy. Anyway I hope you enjoy the read:

I craved an adventure in coma-inducing paradise and now I"ve got one: half a mile off the coast of Antigua, I'm contemplating a marine eco-enclosure teeming with stingrays, and I have to say they"re rather unusual looking. Doubtless you"ll agree if you"ve ever seen one up close. If you haven"t, simply take a tadpole to your local service station, inflate it to the size of a Spacehopper, release all air, reverse over the result to really mess up the features, and you"ll get the picture.

I may have oversimplified things a little. In fact the stingray plays a crucial role in the waters of the Caribbean, for it is the vacuum cleaner of the deep - hence the spaniel-soft eyes high on top and an utterly unrelated mouth in its pale, soft underbelly. Sure, it looks a sight to anyone other than Picasso in his Cubist phase, but at least that way it can hoover the sea bed without too much fear of concussion.

What is more, stingrays possess unique powers to seduce humans. Our party of nervy Brits and overexcitable Americans discovered as much on Caribbean cruise with a difference: Eli Fuller"s extreme tour of Antigua using a 45 foot powerboat. Leaping from the jetty with snorkels and a splash, we were treated to one of the warmest welcomes in the West Indies as the inhabitants of Ray Park waltzed around us like camp, caped counts at an Austrian ball. A caresss here, a nuzzle there, even a love bite for the ladies - when the gang resurfaced after half an hour with the amorous beasties, one woman realised she"d have a bit of explaining to do to her boyfriend back on dry land.

On dry land, chances are you wouldn"t associate a holiday on Antigua with the call of the wild. This being the Caribbean, there are so many demands on your time - chief among them doing nothing whatsoever. Upon the palmy beaches, along the goat-grazed ways of bougainvillea and canary-yellow timber homes, the island affects indolence so convincingly you guess the authorities must add something to the drinking water.

There was certainly refreshingly little action at my designer-colonial hotel, Carlisle Bay. Unless, that is, you include casually devouring trios of dwarf bananas which arrived mysteriously in your room, artfully placed on oblong plates; or admiring at length the fashionable cream-and-darkwood interiors from the balcony daybed, or toasting sunsets with a(nother) martini. Some folks signed up with Sembi, a gentleman employed by the hotel to take guests power-walking in the village. Personally I found it better to let him do it for me while I exercised my iPod on a sunlounger.

That was two days sorted. But for all the allure of reclinable beach furniture, there comes that Caribbean moment when thoughts turn to What Lies Beyond. I was becalmed in a sea of rum punch when it happened to me. From nowhere a mountainous swell grew, out in the bay, the waters rising uncharacteristically into jellied heights that wobbled momentarily then sank, sending the horizon of moored boats into a clockwork rocking. The land and the sand paled into insignificance by comparison with the high-seas drama developing. It was exhilarating, enticing, like another Antigua beckoning. It was time to push the boat out.

And what a boat it turned out to be. I got the lowdown on Eli"s mean machine the following morning from a sympathetic hotel receptionist who understood my need to experience Antigua beyond bonsai bananas. (She duly plucked a leaflet from a drawer with long maroon talons.) The vessel was bobbing idly at anchor in Jolly Harbour when I first glimpsed it: a glorious 45 foot purpose built powerboat, sleek as a sabre, with the dazzling white looks - and the power - to cut a veritable Miami Vice dash across Antigua"s blue deeps. Eli had bought it mere weeks previously, in Florida, sailing it home in six heady days: down via Nassau, Turks & Caicos and St Martin, en route encountering some infamous Pirates of the Caribbean - Mackenzie Crook and the cast. Together they"d rummed it royally.

"This tour is called Xtreme," Eli announced, as he eased the powerboat out past million-dollar harbour villas painted butterscotch and pink, supported on concrete piles 30 feet deep, like a tropical Venice. The T-shirted human cargo of 15 or so shuffled, seeking to find comfy positions on banquettes, or in obliging partners" arms. "We"re going to be travelling at 40mph so watch out for hats and loose stuff." There were a few involuntary whoops, a few gently greener complexions and one lost hat as the boat rose and belly-slammed in a rollercoaster motion. We were off.

Antiguan born and bred, Eli Fuller has been showing visitors the hidden beauty of his home turf and surf for 20 years or more. The reefs, the mangrove forests and the wildlife. The insane blowholes in the eroded limestone rocks that spew the sea skywards, like whales do. The deserted white-sand beaches and all the other elements you might think incompatible with a major-league package-holiday destination.

Away from the sunlounger, seen from the choppy wilderness of the sea, a wilder world unfurled as we whipped along: looking to shore it was moody and forest-cloaked, huge and forbidding, any hotels too small and insignificant to compete. In places it was humped violently into coral lumps and volcanic peaks - pristine as it must have looked to the seamen who came here for construction timber in the 17th century, when it was one of the most densely wooded islands in the region.

Waves frothed and lunged like rabid dogs at crazily angled strata rising from the neon Caribbean. Pelicans rested in haughty silhouette, motionless on jagged outcrops. And when later we snorkelled 60ft over the sea-bed boulders that had tumbled into the blue from the dramatic rock Pillars of Hercules, it felt like a dream sequence. There were coral fans and darting grunts blue and yellow, trumpet fish down deep. And blue tang, seemingly lit from within. A colonial anchor lay far below, broken and barnacled. Another island altogether.

I say another island. In fact Antigua is a buried-treasure-map fantasy: so many tiny uninhabited outcrops where you can spring-clean your soul in the breezes along a bleached beach, no trace of man as far as the eye can see. In this respect it"s unique among the big Caribbean destinations, with a score or more barrier islands and reefs scattered off its northern shores.

Here turtles feed on grassy beds, bonefish and young barracuda breed, and stingrays do their housewife routine, cleaning up shells and cockles from the seabed and clucking at their lascivious husbands. Local wildlife is engaged in a constant battle for supremacy with more exotic species: Giorgio Armani, for instance, whose new villa slides by far above us, high on a bleak western headland. It"s a sleek giant composed of two edifices, one black, one grey, in the designer"s signature tones. They work rather well with their earthy surroundings. How very considerate. How very this season.

Eli displayed a healthy tan across his good-looking Caucasian features, heightened by the mystique of a baseball cap pulled low. And he displayed a healthy scorn for local powers that be and their apparent disregard for Antiguan concerns when big bucks are at stake. Swinging the boat in off bumpy waters to pick up more of the party at St John"s harbour, he indicated an innocuous-looking pale-blue storage depot. "Designed and built by the Japanese - it"s Japanese Fisheries," he yelled over the roaring breeze that yanked at the long hair of women holding on for dear life up front. "We vote alongside them when it comes to whaling and in returns Antiguans are conned into letting these things be built. But they"re designed for trawlers, which is not how we fish and so they"re actually useless to us."

On along the western coast the waters calmed to vast sheets of aquamarine and powder-blue, a waft of molasses from a rusty plant, glimpses of decrepit cannons as we bounced past distant St James Fort trailing a wedding train of foam. In the 18th century the British chose Antigua as the nerve centre of their local naval activities - pitted with indents and hidden coves it offered safety from storms and the savagery of pirates. Centuries on, weathered relics in iron and mossy basalt, distract you at every turn. It ain"t half Nelson.

Suddenly the sea was mad again, signalling the treacherous north of the island, boiling itself incessantly into molten troughs and peaks. After the drama of the stingray swim it was a touch too much for some as the PowerCat soared then hull-floppped ear-shatteringly. "We"re off to the chiropractor the minute we get back," one American (hopefully not too litigious) was heard to whimper, clambering in defeat back from the prow. My thoughts were turning for some reason to the Tupperwares of pasta-twist salad I"d seen Eli"s team stash aboard discreetly, back at Jolly Harbour.

I cannot recall a more beautiful picnic anywhere, ever, than that served by Eli on tiny Green Island. Black and red mangroves twisted up from waters now still and dark. Here was an eerie place of silent spreading acacia trees, coconut palms and thrusting finger cacti that emphasised the seductive strangeness. I hid around a tiny headland from the group (now pally and talkative). The trunks I"d packed weren"t fit for mass scrutiny, but more importantly, I wanted to be alone on the demerara sands. Squinting as I lay, wet from a swim, I saw at eye level only strewn coconut husks thrown up by the tide, conch shells pink and erotic, and cloud kingdoms bunched on the horizon. This, I decided, would give any mainland five-star a run for its money.

They"re fragile places, these islands - breeding grounds to osprey, turns, Red Billed Tropic Birds and such endangered species as brown pelicans and the (definitely lesser spotted) West Indian tree duck, but also ripe for development. "I grew up with the luxury of these places," says Eli. "If you"re going to protect tourism, you"ve got to keep them." He talked of Bond-movie-lair style developments in the vicinity, for which "the first thing the developers did was bulldoze all the red mangrove. You"d go to jail for that in Florida.

"A beach without a hotel can be an attraction. But to the powers-that-be, a beach without a hotel is a liability. If you want to lose an election simply don"t encourage construction. Ecologically we"re in the Stone Age." The boat rolled like a whale in the mouthwash swell as we made for port down the eastern side. The sea leapt and sprayed those at the back. Some of them sensibly wore goggles, protected against a Caribbean not about to be tamed. Not yet.
Posted by 365 at 12:54 pm