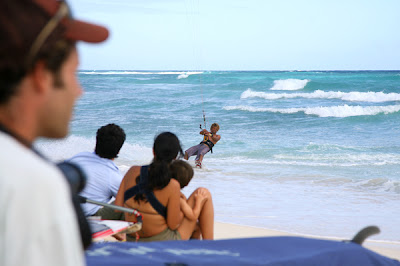 I was going to speak about the Barbados "Beach Culture World Tour" event last Friday but didn't get a chance to with the crazy story of the rescue. Anyway today I will finish the story off.
First I just gotta reprint an email we had from some very happy guests. We get these sort of emails all the time, but this one is especially nice I think. From California this morning:

It's my first day back here at work in Los Angeles, but all I can think about is eating barbequed chicken and pasta salad on Green Island. The Extreme Tour was an experience of a life time, and I just wanted to write to you to say thanks.

The Extreme boat was gorgeous, and it was thrilling to cut through the waves at such intense velocity. JD was our captain, and he was amazingly deft at handling the boat through coral reefs and against strong Atlantic currents. He made it look effortless to navigate, which is surely the mark of a skilled sailor. And between the crew of Ty and Junior, well, we felt completely safe, entertained, educated, and well-attended to throughout the entire trip.

Of course, snorkeling with Stingrays was sensational. They're so cute that I kept smiling whenever I saw one swim underneath me, which resulted in water getting into my snorkel mouthpiece constantly. (My fault entirely - you shouldn't smile while snorkeling, but I just could not help myself.)

Best of all, my husband had the best birthday ever in Antigua. He can't stop talking about his Extreme Circumnav tour. He sounds like he's 9 years old, and not 49, when he tells people about his great boat trip. He had a ball.

The bad news now is that we're back to work for a while, but the good news is that we get to go back to Antigua within the year. Sandals gave us a complimentary 4-night stay to come back, since the room we originally booked with them was still being constructed. We could not be more thrilled to return to your beautiful island. When we do, we're definitely taking the Eco tour.

Nell, thanks for all of your help in setting up this trip. Know that you provided to us - two city-weary, traffic-battered, urban dwellers - the trip of a lifetime. We really needed that, and you guys truly delivered beyond all of our expectations.

OK back to the Barbados story. I know some people just love stories so here goes. If you go back a few days on the blog you can read about the first Beach Culture Event organized by Brian Talma seen here on the left. 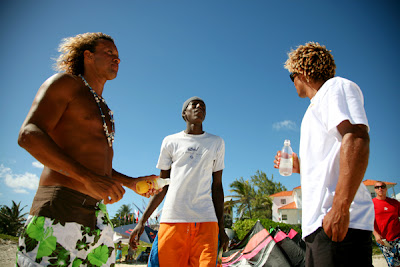 Our little Antiguan team arrived at Silver Rock on Barbados' South shore after sailing 285 miles across the archipelago. When we arrived there wasn't much wind unfortunately and the windsurfing and kitesurfing wasn't being featured. This event is about all aspects of beach culture with a main focus being on the surfing sports: wave surfing, windsurfing and kitesurfing. There also were other competitions in a wide array of beach culture activities. Anyway, there were some waves rolling in and when we arrived a hard core surfing competition was going down. At first it was the junior girls and let me tell you that they would have put many adults to shame. Slashing off the lips and cool style showed that surfing in Barbados isn't just a male sport. We saw boys and girls of all ages surf and then the adults. In between "heats" of surfing where expert cementation was going on they had a conch blowing competition. In the Caribbean many people on the beach use Queen Conch shells as horns and let me tell you that they are loud as hell. Anyway, during the beach culture even there was a competition with contestants from around the world taking part. The poor fellas from Hungary didn’t do enough training because of the lack of good shells back home and as a result failed to make it into the finals. Trinidad's conch blower had been partying too much the night before and somehow didn't have the stamina that the Guiana and Barbados contestants seemed to possess. Unfortunately the fantastic melodical blowing prowess of the Guiana conch blowing sensation couldn't sway the crowd away from the extremely talented local favorite. 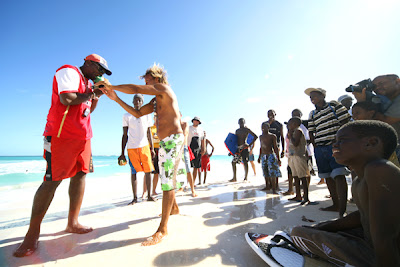 "Full Moon" as he is known on the beach in Barbados blew his conch like a demon possessed and the crowd went bananas (or should I say conch mad). Since this section of the Barbados Beach Culture World Tour was being judged by the beach crowd..the world conch blowing title went to Full Moon from Barbados who is now ranked #1 in the world.
When I was a kid, Pappy, from Pappy's watersports was the best conch blower in the world as far as I was concerned, but he'd have a hard time blowing with these young new stars.
That afternoon we chilled back on the catamaran and in the end went out to the famous St. Laurence Gap for some of the Bajan nightlife. In the morning we went back to the beach where the wind had picked up and the action was in full swing. Some of the best "freestyle" windsurfers in the world are from Bonaire and 25 people from there came down to take part in the event. Tonky and Tati Franz who have been winning freestyle (trick) events immediately stunned the crowd with massive aerial tricks. There were guys from Venezuela, the usa, europe, dominican republic, barbados and other countries taking part in a huge expression session of windsurfing freestyle. Some of the complex maneuvers were hard for even me to understand. These guys were amazing and the large beach crowd was eating it up. 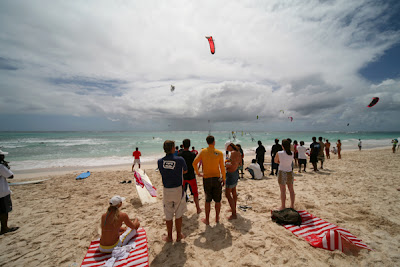 After the windsurfing it was time for some kitesurfing action, and our only competitor in the Beach Culture even was full time kitesurfing pro, Andre Phillip. In fact, he was the only full time pro there and the competition was a little skewed in his favor. Anyway, not to just steal the show Dre decided to do a session comprised of the most difficult aerial tricks in his repertoire. To the untrained eye (which much of the crowd consisted of) his aerial display was in the same league as the rest of the competitors and only the hard core kitesurfers there knew how difficult his moves actually were. If was a good expression session with some of the guys showing some great and huge jumps. The windsurfers actually got more of the strong winds and as it died down the kiters slowly came back to the shore.
In between events there was beach cricket with some famous international cricketers taking part. Both the kids and adults seemed to enjoy the cricket as much as the other events and it was pure energetic action throughout.
All in all the first event in the "Beach Culture World Tour" was a massive success and I am sure that we will be back there with a bigger team next year. Most of the international competitors there have competed in extremely serious events all over the world which at the top level are rarely about fun. They are sometimes soo serious that having fun is impossible. Brian Talma, the Beach Culture even organizer, has been to many of the serious events and wanted to make this event something different. Its all about fun and action as he keeps on saying. It's not all about who won or which rule book was being used....it’s about coming together to take part in what makes the beach more of a life and not just a place. 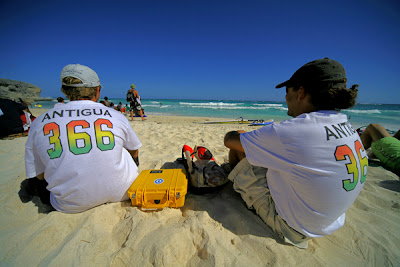 Stay tuned for a story about the trip back to Antigua. That was pure adventure.
Pics include conch blowing finals, dre kitesurfing, the beach, team antigua, and a pic of brian, Full Moon and Andre.
Posted by 365 at 10:26 am