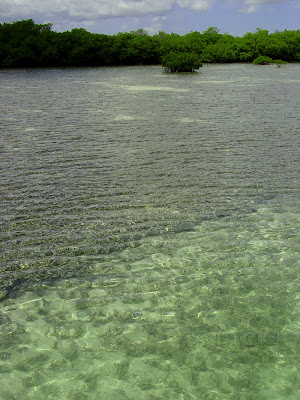 After, explaining what happened yesterday to the coast guard and the news people, we didn't imagine the story could possibly change so dramatically. Our island is a funny one...I guess most small towns are like this too. The first thing that started happening was that people began to call me and my friends asking if it was true that one of my boats had sunk. Somehow this juicy rumor was spreading quickly around the rock, which is one of the reasons I wrote about it on the blog. If people want to find out the real story all they have to do is speak to the crew. Francis is on 268 764 2681. Tony is 268 726 7692 or even easier come to the blog.
Someone called me to inform me that adult who was actually trying to help the kids and ended up nearly drowning, called in to the local radio station to say that the incident wasn't any big deal and nobody was in any grave danger. He admitted that he did get some help from Tony and Francis, but that it was never a matter of life and death. I was on my way to meet the crew when I heard this and was eager to get the full detailed report from the boys. It was even more dramatic than I thought. I won't go on and on about it but will add a few points that I didn't mention yesterday. First, is that while taking one of the kids off the bottom, Tony was also grabbed by another kid who started pulling him under. Tony managed to grab one of the fender's lines that he had thrown in and was able to save the two kids and himself by kicking to the shore. Tony said that by the time he got to the shore and put the drowning girl on her side, he was totally exhausted. He said he nearly passed out himself. Another thing he said was that when the girl who was laying motionless down below made it to the surface, her eyes were rolling back into her head. While he pulled her unconscious body to the shore she kept vomiting. On the shore she brought up more and more before starting to come to. The teachers behind him tried to position her on her back but because of Tony's recent training he insisted that she stay on her side to bring up all the water. He said "I wanted to do everything Jonathan's way". That is Jonathan from ABSAR who had just given him the first aid training. Tony, Louis, Francis and the guests all agreed that no matter what three of the kids would have perished and possibly the others as well including the adult who was being dragged under before the fenders were thrown to him.
Anyway, this same man who was possibly saved by the fender that Tony threw in, was in fact the person organizing the trip. Like I said his account of what happened is dramatically different and minimizes the efforts of Tony and Francis. He made several calls to the radio station, wrote an article in the paper and was even a guest on the radio today. Nell and I spoke with some of the guests from the tour yesterday and we all still agree that Tony and Francis are heroes and those kids and all the adults involved are super lucky. It’s a terrible thing that happened and the organizer and the teachers who were there including the ministry of education (who knew about it) all need to rethink this entire episode very carefully.
The organizer is a guy called Eugene Humphreys and his heart is in the right place. His passion is similar to mine which is showing people the beautiful places that Antigua has to offer. Specifically he wants to show the residents of Antigua how beautiful the off shore islands are since they are all threatened by development. The threat of development is something that you hear each time you do our tours as well. I think that he has done a great service to the people of Antigua and I am pledging money towards the purchase of a small boat for him. That being said I am disappointed that he felt the need to publicly diminish the heroic efforts of Francis and Tony. I guess I can see his point of view or see at least his motivation to do some quick damage control. Anyway, I hope this doesn't put a stop to his efforts which by the way seem to be totally philanthropic. People need to see these off shore islands and understand why we need to keep them from becoming a huge development. Anyway, like many of the radio station callers were saying......all is well that ends well. Thank God nobody was badly hurt. We all need to learn from this episode and move forward wiser and more prepared. Here is a pic of the windward side of the narrows. You can see the incredibly important flats and red mangrove plants. The pic was taken from a boat sitting in the channel on the other side of the flats which are only about 5 inches deep on average. As the flats end the water quickly drops off to about 12 feet in the middle.
Posted by 365 at 5:03 pm

Damage control is exactly what it is. This person's response is an attempt to minimize the risks that were taken with those kids. However, we all know that does not diminish the heroism of unselfishly putting a tour on hold to save lives, meanwhile risking your own.

as we all know, s**t happens - and fortunately, in this case, there was no irreparable damage. also because of the organiser's 'good intentions' (viz: today's blog) i guess i would hate for him to be prosecuted for 'reckless endangerment' or such. however, it IS extremely important that lessons are learned here regarding, for example, the ratio of responsible adults to kids on such expeditions and the importance of swimming skills when the acitivity planned is water based. i also think that a fair acknowledgemnent of the crew's efforts and a little 'owning' would not have gone amiss on behalf of the organiser.... come on 'elps' - a little humility and an apology... what harm could that do???