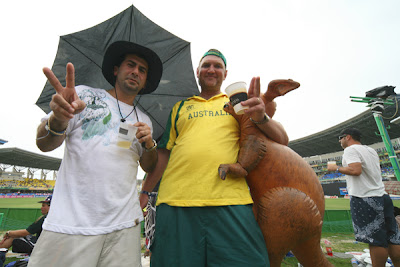 It took them two days but as predicted, the 2006 World Champions, Australia, easily beat The West Indies here at home. It was the opening match at the Viv Richards Stadium and although most people here would have enjoyed a better result, i think that most of the people who actually attended the match thought it was great fun. The Aussies came out to bat first and did a very consistent job of racking up their runs. The rate was never that high, but like world champs they knew what they were doing and even with the rain distractions they managed to set a hard target for the WI to follow. The party stand where i was sitting was full to the brim filled with half of watch team's fans. All got along together in the light rain that seemed to fall for most of the afternoon. The party stand is also called "beach 366" which is kinda funny really because another business beat them to it with that name. Wapping Beach down town st. johns also uses that name, but i guess the stadium is bigger and wasn't that concerned. Anyway i think its beach 367, but whatever it is to be called the party stand is unique and as was typical antiguan form, it lived up to expectations in the party dept. What international stadium has a party section with a swimming pool and a sandy beach? The lads from down under thought the pool was the best thing since marmite and spent all day on Tuesday splashing all over the place as you could see from yesterday's blog. With the rain delays the match was postponed until Wednesday when the West Indies were set to bat in an attempt to get 300 runs plus. Yesterday's weather was more typical with extreme sun and heat. 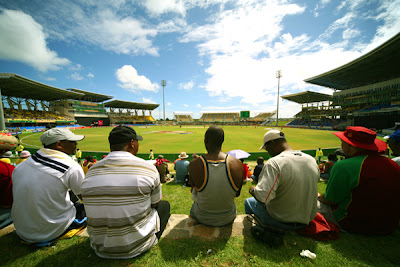 The required run rate kept on getting larger and larger and i knew it would be hard to catch the champs. Lara had some very good 4s and a nice 6...possibly two, but with a LBW at about 77 runs we knew things were not gonna work out. In the end the world champs were victorious and the Viv Richards stadium showed them a good time. Chickie's music kept the vibe up and even the famous Gravy was there to entertain. Here are both of them from yesterday: 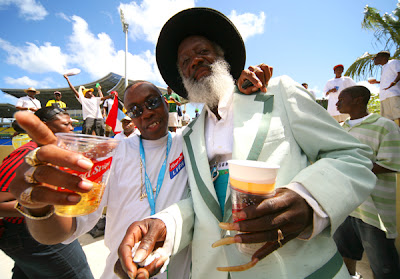 I am off there again right now to see our guys play New Zealand. It's trev's 40th birthday and i hope he gets a good result on it as well.
Posted by 365 at 6:35 am