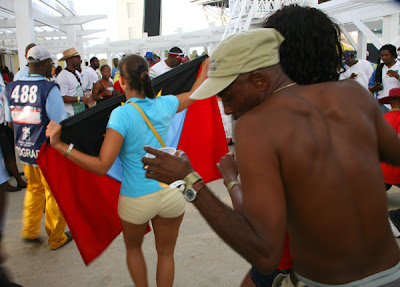 If you are a cricket fan then you will already know that the West Indies got beaten once again in their second match of the “super 8” part of the World Cup. First the Aussies thrashed us on the first match ever played at our new stadium, and then yesterday the kiwis spanked us on match two. 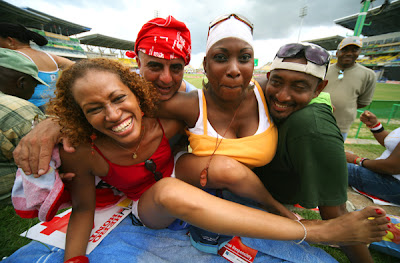 Yesterday’s match had some episodes of greatness, but for the most part our boys looked slow and uninterested. 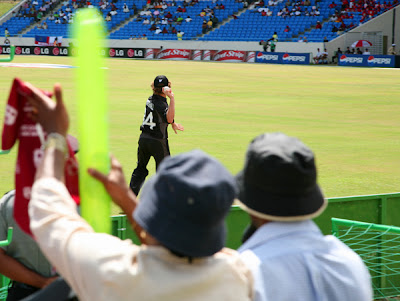 Although the west Indies side did even worse than when they played the Aussies, I think New Zealand will be no match for the Aussies. Anyway, while we sat there looking at our pathetic run rate, we could only try to salvage some fun from being there. After all, we were sitting on the grass in the party stand on Trevor’s 40th birthday. Seen here with a friendly Trini supporter. 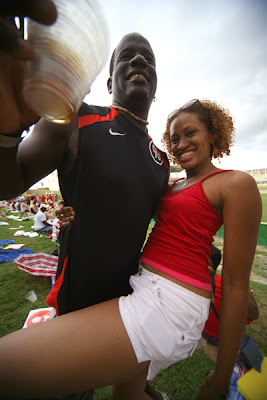 The pool seemed to be full of a mix of nationalities this time instead of all Aussies like the previous days and boy was it hot. Very little wind and almost uninterrupted sunshine made it feel like there was no ozone over the stadium. Sweat poured off of us and we had to keep making use of the drink tickets that were supplied at the entrance. With your party stand ticket, you got lunch and 9 drinks which should have been soft out there in that heat, but this is cricket in the Caribbean and nobody drinks sodas during a match. Rum and Coke was the patriotic drink of choice for Trevor’s birthday celebrations and we had plenty. Actually Pepsi is the main sponsor so coke wasn’t an option, but they seemed to go down better and better as the chances of winning seemed less and less likely. Towards the end dancing was breaking out all over the party stand and it was like a miniature carnival with the famous chickie hifi belting out some sweet West Indian tunes. There are probably very few teams who’s fans would dance and drink with so much festivity after a dramatic loss, but that is what Caribbean cricket can still cling to. We do want our team to win, but we won’t let their poor showing dampen the mood too much. West Indian captain, Brian Lara, tried to blame his team’s result on the lack of Antiguan support in the grounds, but I think he’s totally wrong. I think his comments today were unfounded and stupid. He’s lucky the fans here didn’t throw stuff at him…..instead they danced after the loss.
Posted by 365 at 4:00 pm