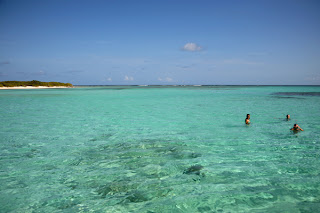 Ever since I was a little kid and I am talking little....my dad has been taking us camping to Barbuda for Easter. Of course we have missed a few Easters over the years, but usually you will find us over there fishing, snorkeling, beachcombing and boating during the long holiday weekend. You see, we get Friday and Monday as public holidays here in Antigua and Barbuda, so there are always a few days off from school and work. We have rented little houses in the village, camped in tents, stayed on sailing yachts and powerboats, and have gotten there in everything from tiny open fishing boats to tiny planes and now our company boats. Its always fun to get off the beaten path and somehow we never get bored with it either. After looking at the shot above try to imagine getting sick of that place...
Anyway, this Easter I had booked regular tours on the Thursday as well as a private charter on Xtreme for Friday. My brother was not happy as he had anticipated getting over there on Thursday afternoon. Anyway, he and a bunch of friends went over on Friday morning to meet up with my uncle and dad who had already gone there days before on their own boats. I did the charter on Friday with Tony since all the other Adventure Antigua crew had special plans. As usual Tony was there to save the day.....It was a lovely day too. The Boltons had been with us many times before and the weather couldn't have been any better. Anyway, after the charter we fueled back up and got the boat ready and packed for me to take it to Barbuda. The general rule of thumb when going to Barbuda is to get there in good light. I have been there so many times that with the modern GPS system that Xtreme has, I was sure that all would be cool. Mykl took up my invite and came along with me after we said thanks and goodbye to Tony. We picked up a little extra ice and a cappuccino from Melinis in Jolly Harbour and took off around sunset. 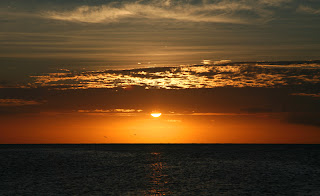 The seas had calmed down from the Bolton's charter and we were able to push it pretty hard on the way over cruising the whole way at over 33 knots. I was trying to get into the lee of Palmetto Point, Barbuda before it got too dark to see the waves. When you can’t see them....it gets difficult to maintain any kind of good speed. Well even at speeds of up to 37 knots we were not fast enough to outrun the darkness and I ended up having to slow down quite a bit for the last 8 miles or so. Once we were in the lee, it was dark but calm and we had to carefully use the GPS to avoid the reefs and shallow spots on the way up to the North side of Barbuda. Our camping spot this year on the North Beach was well inside the shallow banks outside Barbuda's lagoon mouth and for the last mile I had to idle over the shallows in the darkness. It wasn't really darkness because the stars were very bright and there was a big glow over the shore coming from Codrington in the distance. Our navigation lights were dazzling fish in the shallows and we kept on hearing splashes. All of a sudden a garfish slammed into the side of the boat. That would have left a bruise. Poor fish. Then another..and another...and another... It was like suicide garfish bombers left and right. We were worried that one might make it over the sides and hit us so we got high up on the helm chair. These oceanic gar fish average about 3 feet in length and look like skinny barracudas. Their sharp pointy beaks are full of tiny teeth that will do damage if they come into contact with you. They skip along the water's surface when hunting or being chased by a predator themselves and I have two friends who have been badly injured by them while out windsurfing. The frightened fish just jumped out of the water into them as they zoomed past on their windsurfers, so this is what I was thinking as my nav lights caused these barbudan gars to go ballistic.

After a few tense minutes of bombardment we managed to clear the shallow flats and move into deeper waters without any damage to Xtreme or ourselves. We only had a quarter mile to go and could see the camp's lights. We arrived just in time for a fantastic mahi mahi (dolphin fish) dinner put on by Alan, my uncle Jim’s fishing partner. I shot this pic of Alan and a mahi last year. Having sipped a few 5 Year Old English Harbour Rum and cokes and watched some hard core domino action it was time to hit the sack. It had been a long day and I had done over 140 miles at the helm. The night sky was awesome and falling asleep with the noise of gentle waves caressing the boat's hull wasn't difficult. More of our holiday tomorrow.
Posted by 365 at 10:53 am