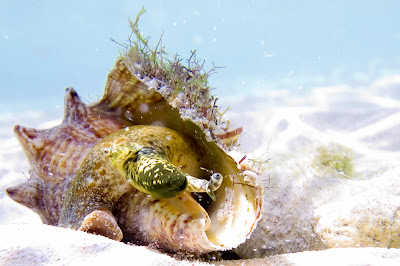 For the past few days the skies have been clearer than they have been for the year and out on the boats we have been able to see the islands of Guadeloupe off to the south, Montserrat puffing away to the South West, Redonda desolate in the West-South-West, Nevis in the West with even St. Kitts a little further North. You rarely will see the skies this clear and it has also been very calm making for glorious boating weather. I have been out the past few days on my little tender which is working great as well as on charter yesterday. We have had a bit of winds out of the North which I guess has kept the African dust pushed further South keeping in nice and clear. 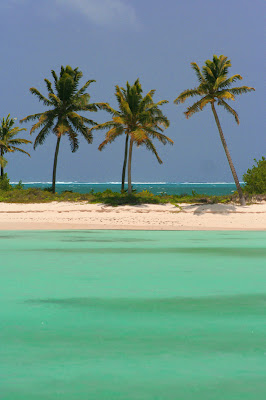 The snorkeling has been equally spectacular on the offshore reefs and I even have gotten into the water!!! These days I find myself waiting for summer before I get in the water (someone always has to stay on the boat you see), but the water has been warm and clear. Too warm many are saying actually. I am saving up for a big hurricane blog soon, but it should be noted that because of the incredibly warm water temps in the tropical Atlantic and Caribbean, the forecasters are expecting an active hurricane season. For once the higher temps are not being blamed on Global Warming though….it seems that a La Nina occurrence is the culprit this time. Don’t get too stressed out though because increased African dust will help prevent the big storms from forming too. It’s a mixed up world we live in these days. Read these very recent interesting articles for more info http://news.mongabay.com/2007/0403-hurricanes.html and http://www.medicalnewstoday.com/medicalnews.php?newsid=66554 ….

Anyway getting back to the topic of clear skies and clear waters. While snorkeling we noticed that although the waters were very clear, there was lots of stuff within it. Upon closer inspection you could see that it contained large amounts of plankton and tiny jellies. Very interesting even though it was extremely difficult to make out exactly what they looked like. I did see some interesting shapes and one such “jelly” actually looked like a tiny tiny dandelion.

Our whales that are passing through at the moment reportedly don’t actually feed on this plankton, but I don’t know why as there is so much of the stuff. Must be too spicy for them or something…”Jerk Plankton” mustn’t be that popular for these North Atlantic feeders. One animal that does eat the stuff is the whale shark and another is the manta ray which both can be seen off Antigua and Barbuda. Although extremely rare, these animals are seen occasionally and I managed to see a whale shark this time last year. They are huge creatures which love to eat plankton, but will also eat small fish as well. Speaking of small fish, yesterday while I was snorkeling I saw a small school of pilchards being chased and preyed upon by yellowtail snappers and oceanic garfish. I don’t often see feeding taking place out on the reef but these poor little pilchards were being slaughtered. One of them managed to escape and swam right up to me to hide I guess. How did it know I don’t like whitebait? It’s not easy out there in the sea. Earlier coming down past the St. James Club we had seen a current line were there was a definite change in water clarity. I thought I saw a school of these pilchards and slowed only to see that it was a huge school of big Jacks feeding on tiny little fish. They looked very similar to the fish that Nemo saved at the end of the famous Disney film although these were free and needed no rescue. When we are lucky to have such clear skies and waters you tend to see so much more. Turtles, rays, dolphins and even whales are easier to spot. This weekend we have several days off for the Easter holidays and I hope this weather holds up. When you are here and do some snorkeling, try to look out for the small things as well. 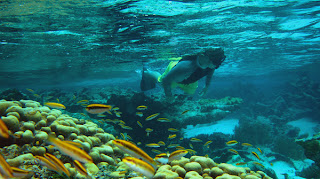 Many people go snorkeling just expecting to see big fish not ever noticing the abundance of small stuff like pilchards and plankton. Its all cool out there enjoy it if you can.
Posted by 365 at 9:38 am